I thought it would be like any other holiday—until our infant son died of SIDS.
Jonna Clark 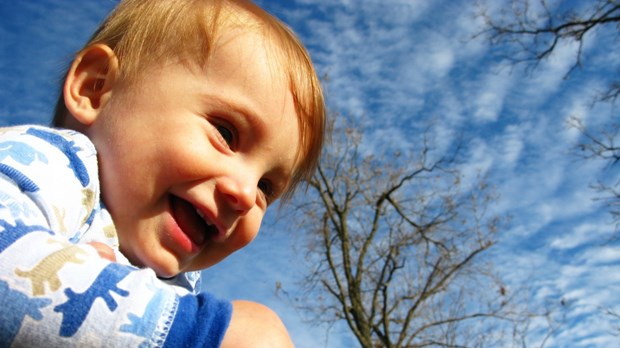 It was the week before Thanksgiving, and as I ran errands in the car with my three sons-Benjamin, six; John, two; and Ethan, four months-I tuned into a broadcast of Dr. James Dobson's "Focus on the Family" radio program. That day, the guest was talking about her child's death, so I flipped the radio off, not wanting to even think about the topic. But my thoughts seemed to have a life of their own. What would I do if it happened to me?

I pondered halfheartedly. As I mentally prepared my grocery list, the answer came in the voice I've grown to recognize as my heavenly Father's: Jonna, you'd get down on your knees and thank me for every moment you were given with your child.

That's strange, I thought, tucking the thought away in a corner of my mind and driving on into the happy clutter of my life.

One week later, my husband, Patrick, our three boys, and I gathered to celebrate Thanksgiving at Patrick's parents' house three hours away. While a football game buzzed in the background, numerous siblings and their burgeoning families arrived laden with hugs and special dishes.

How blessed we are, I thought, relishing the warmth of the fireplace, the delicious aromas filling the air, and the joy of seeing Patrick's grandmother holding baby Ethan for the first time. Ethan smiled and burbled as family members snapped his picture and oohed-and-aahed over him.

Eventually, I whisked Ethan away from the hubbub of last-minute meal preparations and laid him down on his stomach for his nap on my in-laws' bed. I adjusted the covers, settling him quickly and quietly without so much as a backward glance.

After we thanked the Lord and enjoyed our feast, I went to the bedroom to check on Ethan. Instead of finding him napping, he was face-down and motionless. My heart skipped a beat as I snatched him from the bed.

"Ethan!" I screamed, jostling him to awaken him. But when he didn't respond, I raced into the kitchen, holding his limp body. Screaming for Patrick, I yelled, "Dial 911! Ethan's not breathing!" My mother-in-law cried out in disbelief as family members familiar with CPR took him from me and began resuscitation attempts.

By the time the paramedics arrived, I was utterly beside myself. While they worked over his little form, I began begging God for Ethan's life. Within minutes, a Med-Flight helicopter landed in the street outside to take Ethan away to a nearby hospital, while Patrick and I raced there by car.

During that car ride, my begging ended. I still clung to the hope that Ethan would revive, but as I prayed in the backseat with my sister-in-law, I remembered my thoughts from the week before when I listened to the Dobson program. My heart breaking, I thanked God for every day we had been given with Ethan, and prayed for God's will to be done.

Once at the hospital, we learned that the team of doctors and nurses tried their best to bring him back, but to no avail. Ethan had died of Sudden Infant Death Syndrome—SIDS; well before the helicopter had taken him away. Twenty minutes after our arrival, Ethan's I.V. was removed and life-support machines were turned off.

Weeping, Patrick and I held Ethan's lifeless body. After prayer and time with the hospital chaplain, we left the hospital and our baby's body to return to Patrick's parents' home. Our family held us and cried, not knowing what to say or how to help. The worst call I've ever made was to my parents to tell them the news. We also asked our pastor to begin funeral arrangements.

At some point, I went to the bathroom to be alone to calm my racing pulse and runaway thoughts. As I slumped in despair on the edge of the bathtub, wishing I were dead instead of Ethan, I heard my loving Father speak again: Be still and know that I am God. Immediately I calmed, sensing his presence.

Since that moment, I've grappled mightily with what Ethan's death means, but for those first horrendous hours, I clung to the knowledge God hadn't forsaken me.

We've marked many a mile in our journey through grief since that Thanksgiving Day four years ago. At first, I was filled with guilt, consumed by the thought I could have prevented Ethan's death. I've since learned doctors now recommend placing newborns on their back to sleep. I've also learned SIDS isn't anyone's fault. It strikes roughly one in a thousand babies and most likely has something to do with brain stem abnormalities and other factors still largely unknown to experts.

There've been times when I railed against God, my friends, and family as I tried to make sense of the loss. Times when I refused to go on with life without Ethan—and lashed out at those around me who were trying to continue with living.

That first Christmas after Ethan's death, lights and decorations, even cards and letters, evoked nothing but disgust in me. All expressions of joy hurt. That first Easter, I sat on my bed, still in my pajamas well into the day, screaming over the phone in raw anger at my mother for her "audacity" to plan a gathering.

I realized I needed help, so I joined a SIDS support group to help me work through my sorrow. But while the other moms in my group seemed able to move through their grief, I remained wounded and afraid I might never fully recover. It was at that point I chose to see a grief counselor, and it was the greatest investment I've ever made.

As I spent the next eighteen months working through my loss, I came to understand that the death of a loved one—especially a child—shakes us to our very core. I also learned that God not only prepares us for brokenness but uses it to teach us some invaluable lessons—if we allow him. I came to know patience, for nothing and no one can hurry grief. And I grew up and into my faith, for it's only when we come to terms with painful loss that we truly discover the meaning of Thy will be done. I'll never be grateful for Ethan's death, but I'm thankful for the ways in which it's changed me. Before his death, I rushed to the next activity, purchase, phase, or place. I was so hurried I never fully enjoyed the present. Now I can spend an afternoon patiently guiding the small, clumsy hand of a child intent on mastering simple but time-consuming needlework. I've slowed down, given up worrying as a pastime, and learned to let go.

Today I strive for a lighter, looser grip on life and those I care for. I love my family dearly, but I've learned that in life there's only one guarantee—Jesus. No one can bring Ethan back or "fix" the situation, but in Christ I've found healing and restoration.

Jonna Clark is a freelance writer. She and her family live in Wisconsin.

Copyright © 1996 by the author or Christianity Today/Today's Christian Woman magazine.