I thought my marriage was strong enough to withstand any threat—but I wasn't immune.
By Kathleen Malloy* as told to Holly G. Miller 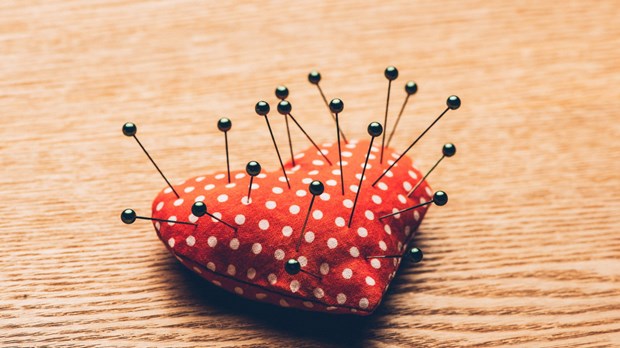 Two years ago, when I admitted to my husband, Bob, that I'd been unfaithful to him, I was prepared for every response except forgiveness.

For weeks I agonized about telling him the truth. The affair—a terrible, terrible mistake—was over; why did he need to know? Keeping it secret was best, I decided, but I wondered if my motivation was to spare Bob the pain or me the shame.

In the end, I had no choice: My emotions were a jumble of contradictions and wouldn't stay under wraps. Bob no longer believed me when I blamed my mood swings on PMS or my inability to return his hugs on my preoccupation with work. I had run out of lies.

At age forty-one, I was an unlikely candidate for an extramarital affair. Bob and I had been married for nineteen years and were active in our church. I'd just taken a job as a secretary in a large public relations firm in the hope of boosting our kids' college fund. Most of my friends already had found their way back to careers they'd put on hold when they married. For a long time I had envied their shop talk, expanding responsibilities, updated wardrobes, and the occasional splurges their salaries allowed. Now it's my turn, I thought.

Three days into my new job, I had my doubts. My skills were rusty, my confidence level nonexistent. After a couple of minutes in front of a computer screen, I wanted to wave a white flag and retreat home.

My supervisor quickly assigned Steve, the resident technology whiz, to bail me out. His duties included training new employees on the office information system, and he later joked that I was his greatest challenge. He recognized my insecurity and said all the right words of encouragement. He teased me just enough to help me relax, then proposed a crash course in data retrieval—whatever that was.

"Translation: Long hours and hard work," he cautioned. "But if you're willing, I'm willing."

He also was willing to schedule a couple Saturday morning sessions and reward my progress with follow-up lunches. He sent me funny messages via e-mail and insisted I respond so I could learn the right codes and commands. I eagerly participated in this silent dialogue and didn't stop several weeks later when his notes took on a decidedly personal tone.

He seemed to notice everything about me—my revamped hairstyle, a different cologne—and wasted no time in complimenting me. Although his attention set off internal warning signals, I ignored them. I was an adult, after all. I could halt our friendship any time it became uncomfortable.

On the surface, my marriage seemed strong enough to withstand any threat. For years Bob and I had enjoyed a warm, comfortable relationship short on spontaneity but long on commitment. I loved Bob and he loved me, and daily assurances came not in words but in our willingness to pitch in and share duties.

If romance had slipped away, I never thought about its absence until it suddenly reappeared—courtesy of Steve—in the form of silly cards propped against my coffee mug, flowers tucked under my windshield wipers, and Post-It notes tacked to my computer screen. I was being pursued—and it felt good.

I couldn't talk to anyone about my confusion, because then I'd have to justify my growing attachment to a man who wasn't my husband. I gradually withdrew from my family, our church, and our friends. They only reminded me that what I was doing was wrong.

My new job with its long hours provided the perfect excuse for my spotty attendance at Wednesday night Bible study and for my decision to drop out of our church's couples club. Bob and our daughters never questioned my need to spend evening in the den with stacks of papers from the office.

My involvement with Steve progressed from professional to emotional to sexual. I hated my double life and the lies I told to support it. Three months later, when my guilt became unbearable, I requested a transfer to a suburban office, a move that put Steve physically, if not emotionally, out of my life. I missed him, but I didn't miss the deception that was the foundation of the relationship. He accepted my decision with little argument, causing me to believe our affair had meant much more to me than to him.

Distance brought clarity—and with it, more guilt. I tried to pretend the affair never happened, but it had—and my conscience wouldn't let me forget. I tried to get back in touch with my family and church, but those contacts made my secret more unbearable.

Why can't I put this behind me? I wondered. I hadn't been caught, and I was even being held up as a role model—the working wife and mom who successfully juggled career and family. But every time a friend said, "I wish I were more like you," I wanted to scream. I didn't deserve admiration.

My need to confess eventually caused me to tell Bob the truth. He had suspected something was wrong because I'd been struggling with bouts of the blues for weeks. I felt emotionally numb and had difficulty responding to his need for intimacy.

His love and trust were daily reminders of my unworthiness. I had to pay for my actions, and, since he was the victim, I wanted him to deal me a harsh punishment. Still, I dreaded the confrontation and imagined the range of his reactions: disbelief, then hurt, then finally, anger.

What I never considered was the response that came after the tears, after the angry questions, after the talk of separation and divorce, and after our decision to try to restore our badly fractured marriage.

"First, we have to forgive," said Bob. We weren't sure we could do it; we only knew that with God's help, we wanted to try. And as hard as that would be for him, it would be even harder for me to forgive myself.

Healing came slowly. More than a year passed before I'd sufficiently forgiven myself so I could accept God's grace. Up to that point, my faith seemed to increase my guilt instead of ease it. Familiar verses about fidelity and commitment jumped off the pages of my Bible, haunting instead of helping me. They reminded me that as a Christian, I'd known the difference between right and wrong, yet I'd sinned anyway. Ignorance was no excuse for my actions. The burden of being a believer never seemed heavier.

Our marriage was fragile, so Bob and I looked for ways to strengthen it. We tried too hard to make up for our mistakes. I overcompensated by acting the part of the perfect wife and mother, fussing with meals, keeping a spotless house, doting on our daughters. Bob struggled to be more demonstrative by bringing me flowers and calling me from work just to say hello. Privately, I wondered if he was checking to see if I was at home when I said I would be. Could he ever trust me again?

We read a "how-to" book about revitalizing relationships and laughed at our clumsiness in carrying out its advice. The laughter did more good than the advice, and we decided there was a lesson in that, too. We needed to laugh and talk more.

We attended a marriage enrichment seminar and picked through the platitudes for something that might ease our hurt. We visited a Christian counselor who helped us understand that "comfortable" marriages aren't always healthy ones. Prayer together became an essential part of our daily life and recovery.

Two years after my affair, our life is coming together. Although I still don't fully understand what caused me to do what I did, I know now that Christians, like everyone else, are vulnerable to temptation. And I understand that a marriage, even a good one, requires constant nurturing to sustain it.

Our relationship will never be the same, because we will never be the same. Trust and respect have eroded, but perhaps in time they will be replenished. The fact that my unfaithfulness didn't become common knowledge now seems like a gift from God. He gave me a second chance, and this time, I pray I'll know what to do with it.

Holly G. Miller is a Kyria contributing editor and author of numerous books.

* The names in this story, including that of author Kathleen Malloy, have been changed.

1998 by the author or Christianity Today/Today's Christian Woman magazine. For reprint information call 630-260-6200 or e-mail tcwedit@todayschristianwoman.net.