How my husband I rekindled our relationship
Mayo Mathers 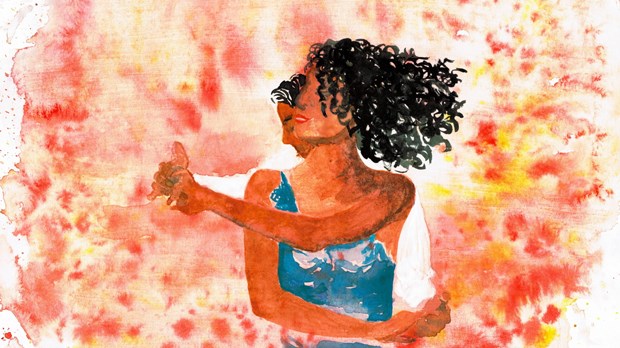 Each Tuesday night, we headed for the dance studio with sweaty palms, moaning over our mutual ineptitude. But we kept at it.

We'd expected many things from the lessons—none of them good. But what we hadn't expected was the surprising refreshment they brought to our relationship. Here's what we learned about marriage from Salsa dancing.

While there's been a lot of colliding and bruised toes (and egos!), our perseverance is resulting in a dance of mutual pleasure and fulfillment.

I could have walked out of class right then and felt we'd gotten our money's worth. I'd been trying to explain this concept to Steve for 31 years!

Of course, there's an important caveat to this rule. A key element to "being right" is knowing when you're wrong. Once during a long-ago argument, Steve glared at me accusingly and said, "You can't ever admit you're wrong!"

His words stung sharply, but pride kept me from backing down. However, the truth of his accusation caused me to do some soul-searching. I knew pride was at the root of my stubbornness, so I finally asked God to turn my pride into an attitude of humility.

It was a difficult prayer to pray, and even more difficult to act on. But I began by going to Steve. "You were right about me never admitting to being wrong. I'm sorry, and I'm really going to make an effort to change."

The words "I'm sorry" didn't leave my throat easily. They still don't, even after years of practice. But I'm always right to admit when I'm wrong—and when I do so, my marriage moves more smoothly.

The man needs to lead.

During our second lesson, everyone became thoroughly confused about a new step. So Victoria stopped the music and patiently demonstrated it again. When she'd finished, she said, "I'm going to turn the music back on and we'll try it again. There's only one thing to remember. Can you tell me what that is?"

All 20 men immediately shouted in unison, "The men lead!" Ah-h-h! Now Steve felt like he'd gotten his money's worth.

This second rule of dance provided some amazing insights. While the men of our class understood the concept of leading, none of the women did. As a result, the men felt as though the women were resisting their lead when all we were trying to do was keep up. Victoria quickly recognized the root of the problem.

"Gentlemen!" she admonished. "You can't jerk your partner's arm over her head at the last moment and expect her to be able to twirl gracefully. It keeps her off balance. Gently lift her arm before you twirl her so she knows where you're taking her."

It made perfect sense! The secret to beautiful dancing is in how the man leads. One night, as Steve and I practiced Salsa at home, we decided Steve would mix up the moves and I would follow. What a mess! Steve didn't give me my signals until it was too late to follow him gracefully, so I compensated by trying to second-guess him. We kept stepping on each other's toes and were thoroughly exhausted within minutes.

It took some time for us to get the hang of it, but gradually Steve started leading me gently in a way I could interpret and follow easily. And we began to enjoy ourselves.

What a vivid picture of our marriage! I realized my resistance to his lead always came when I felt jerked around, with no time to discuss a given circumstance or contemplate options. Salsa made me realize I didn't object to following Steve's lead; I objected to having no sense of where we were going.

On a recent trip to Spain, tensions arose as we tried to find our way around one small coastal town. When we exited the bus, Steve took off down a street in search of a motel, expecting me to follow unquestioningly. After doing so for nearly 20 minutes in scorching 110-degree heat, I grew cranky. Finally I stopped and demanded, "Steve, remember what we learned in Salsa class? If you want me to follow, you need to give me hint of what your plan is!"

"Sorry," he laughed as he pointed in the direction we were walking. "I figure if we head toward the ocean, we'll find a motel because that's where tourists always go."

As soon as I learned his rationale, I was more than willing to follow, because his plan made sense! It had been my not knowing that had incited my resistance.

Learning how to lead hasn't been easy for Steve, just as being willing to admit when I'm wrong hasn't been for me. It's taken constant practice and patience for us to learn how to move together in a way that brings out our best as a couple. While there's been a lot of colliding and bruised toes (and egos!), our perseverance is resulting in a dance of mutual pleasure and fulfillment.

Flirt and have fun.

Salsa is performed on a series of eight counts. Before we put our steps to music, we learned them by counting one, two, three, four, five, six, seven, eight over and over. Even after adding music, we still counted in time to the beat. During this stage, the Salsa was more work than pleasure. We came home hot and sweaty after each class, feeling like we'd been to the gym for a workout. As our dance steps became more routine, Victoria began to teach us to have fun.

"The Salsa is a flirty, romantic dance," she said one day in class. "Have fun with it."

She instructed us to flirt as we danced. I was shocked at how awkward I felt— it had been years since I'd seriously flirted with Steve. I was just getting ready to run my finger playfully down his chest when he accidentally tromped roughly on my foot. I decided flirting wasn't necessary for old married couples.

Nevertheless, the concept stayed in my head. Steve and I have a reasonably good marriage, but over the years our flirting had faded. I decided to try a little flirting outside dance class. But the awkwardness I felt in class followed me home. I was saddened to realize how platonic we'd gotten, even in our intimacy. The myriad details of daily life and the brutal schedules we maintained had robbed us of the wonder and delight of married love. It had become much like another thing on our "to do" list. I continued to struggle with this rule of Salsa (and marriage) until Victoria introduced us to the next rule.

As our lessons progressed, Victoria had us face our partner, our hands properly joined, then slowly counted as we did the associated steps.

"One, two, three—freeze!" she shouted instead of the expected "four." So we froze, face to face. "To dance the Salsa beautifully," she explained, "you need to pause and be fully engaged with your partner on every fourth and eighth step. You're gazing into your partner's eyes, fully with him in the moment."

That's the easiest Salsa step—and marriage step—to miss. You think you can keep going without the regular pauses, but before you know it, your timing's askew. And that's where Steve and I were when we signed up for Salsa class.

One Friday night after our lessons had ended, Steve suggested we go to dinner and a movie. I picked up the phone. "I'll call the kids and see if they want to join us."

"No," Steve said. "Let's keep this evening to ourselves."

So we found an appealing restaurant. After dinner, we went to a movie. Once home, we filled our bedroom with lit candles, turned on some music, and brushed up on the art of flirting. We felt spectacularly vibrant and alive—and very glad to be married to each other!

While it's healthy to socialize with friends and family, our Salsa lessons reminded us how vital it is to make time for ourselves as a couple.

Stay in the dance.

As our last session ended, Victoria admonished us not to take ourselves too seriously. "Even the best Salsa dancers miss a step now and then," she said. "When this happens, give yourself time to catch the beat again, then get back into the dance."

How many times have Steve and I missed a step in our marriage, sometimes several steps? At one point we were so out of step, the word divorce was mentioned. If we've learned anything at all, it's that steps do get missed—some small, some huge. But the music keeps playing even when we're so off kilter we can't hear it. All we have to do is stop, listen for the beat, and step back into the dance.

Steve and I are far from being naturals when it comes to dancing. We'll never clear a dance floor while people watch in admiration. However, we're learning that by following a few basic rules, we can move together in a way that brings mutual pleasure and satisfaction—not just on the dance floor, but also in marriage

So what's the best marital advice I can give to other couples? Take Salsa lessons. Everything you need to know about marriage, you'll learn in Salsa class.

Mayo Mathers is a freelance writer who lives with her husband in Oregon.