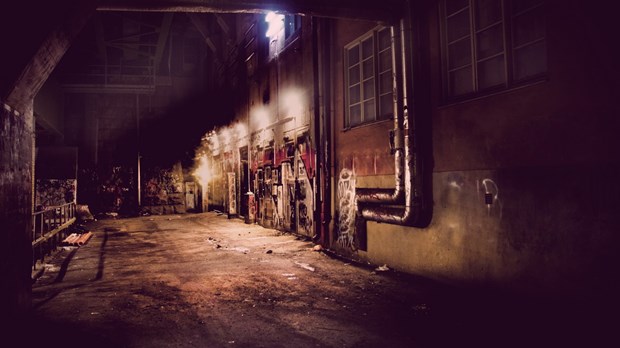 She'd walked in late to her aunt's church in Augusta, Georgia. A struggling widow, Christian, and drug addict, Ashley had released custody of her five-year-old daughter, Paige, to her aunt, Kim Rogers, and was there for a visit.

The church was distributing The Purpose-Driven Life, and people could take one even if they didn't have money, Ashley remembers. She looked in her wallet and found a dollar bill—the same dollar she'd used to roll and snort crystal methamphetamine, her latest drug of choice. Ashley placed the dollar bill in the offering plate. For years she'd wanted to come clean, so she picked up the book on her way out and started using it as a daily devotional in an attempt to get her life back on track.

A month later, Ashley made headlines around the world for using The Purpose-Driven Life to help calm Brian Nichols, the alleged Atlanta courthouse killer who murdered four people, including a judge. Nichols held Ashley hostage for seven hours before miraculously letting her go. Ashley was hailed a hero as television news cameras broadcasted Nichols being led away from her apartment in handcuffs.

What everyone didn't know at the time, however, was that Ashley felt like the last person in the world who should be so celebrated. In recent years, she'd been arrested for shoplifting and driving under the influence, witnessed the brutal murder of her husband, lost custody of her daughter, and still struggled with a serious drug addiction that started in high school.

Yet somehow, as Ashley discovered that night, God still was willing to use her for good. And in the process, Ashley found her life would never be the same.

A Moment of Truth

On March 11, 2004, Brian Nichols, a prisoner on trial for rape, killed four people at the Fulton County Courthouse in Atlanta, then escaped and randomly made his way to Ashley's apartment complex in nearby Duluth, looking for a place to hide. Ashley had been up late unpacking boxes in her new apartment and left at 2 A.M. to purchase cigarettes at a nearby gas station. Upon her return, she became Nichols' target.

"I was standing in the doorway with a gun pointed at my head, being forced into my apartment with the door locked behind me, thinking, I'm going to die. Why am I going to die?" she says.

Once Ashley realized Nichols' identity, she repeatedly pleaded with him to not hurt her for her daughter Paige's sake. "My little girl doesn't have a daddy, and if you kill me, she won't have a mommy either," she cried to him.

Ashley slowly earned Nichols' trust by revealing her painful past. She'd become pregnant at 20 and gave birth to a premature, two-pound baby girl. She and her boyfriend, Mack (who later became her husband), ran wild—partying on the weekends, drinking and dabbling in drugs. Both spent time in jail for driving under the influence. Then, when Ashley was 23, Mack became involved in a brawl and was stabbed right in front of her. He died in her arms.

Ashley told Nichols how Mack's death sent her spiraling. "I didn't care about anything anymore," she says. That's when crystal meth entered the picture. Using the drug became an everyday habit. Her teeth began to rot and her hair thinned. Ashley surrendered custody of her daughter, started experiencing paranoia, and ultimately ended up in a mental hospital after a hallucination brought on a near-fatal car accident. She went through three drug recovery programs before she finally started making progress. That's when she moved to Atlanta, determined to get her life on track.

As a student working two jobs, Ashley still used meth occasionally when she was stressed or wanted to lose weight. She had a stash in her bedroom the night she was held hostage—something she offered to Nichols and later regretted. He wanted to relax and decided to use the meth. He also asked Ashley to do it with him. As Ashley began telling Nichols what a struggle drugs had been for her for so many years, she realized something for the first time: She truly was an addict. And she didn't want to be one any longer.

"It was the first time I ever said 'no' to drugs," Ashley remembers. "I was faced with a life-or-death situation. All I could think was, If I'm going to die tonight, I'm not going to meet my heavenly Father with those drugs in my nose."

Ashley, who had been raised in a Christian family and accepted Christ when she was seven, struggled to maintain her walk with God as a rebellious teen. But that night, God finally caught her full attention for the first time. "I could sense him telling me, Choose the drugs or choose me," Ashley remembers. "I heard him loud and clear—and I chose him. Immediately I heard him say, I'm here. It' s OK. I'll get you out of here if you just trust me."

Afterward, Ashley read Nichols the chapter "Using What God Gave You" from The Purpose-Driven Life. Nichols asked Ashley what she thought God's purpose was for his life. "Turn yourself in," she told him. "Stop running. You killed some people. You've got to pay for that."

Ashley continued to talk with Nichols through the night. And just as she'd planned on and prayed for all along, she walked out of her apartment unharmed the next morning to be reunited with her daughter.

She still can't believe Nichols let her go. Ashley believes God allowed her to survive the ordeal in order to fulfill a purpose of her own—sharing with others that the Lord never gives up on those he loves.

"I want people to know God has a plan for their lives if they'll let him work," Ashley says. "None of us is perfect. But it's never too late to turn your life around."

Today Ashley is a testament to her own words. She underwent voluntary drug testing regularly for the first three months after her ordeal with Nichols, joined a Bible study at her church, and has remained drug-free. "I take it day by day," she says. "But I haven't felt the need or desire to do drugs. It's as if God reached down that night and said, I believe you. I believe you want to be done with it."

Currently, Ashley is learning how to be a mom again to Paige. And she's helping her mom, 49-year-old Mary Jo, a smoker of 30 years, face a different terrifying ordeal: lung cancer. "The cancer is inoperable," says Ashley, who has since given up smoking herself. "The only thing that's going to help her is chemo, radiation, and prayer."

Once again, Ashley finds herself thinking back to that night with Brian Nichols. As much as she felt like she helped him, God ended up using him to help her. "Had that not happened to me, I may still be out there, smoking, dabbling in drugs," she says. "I don't think I would have been able to handle my mom having cancer. But now God's getting me through it. He's been my rock."

Ashley also wrote a book about her ordeal, Unlikely Angel, in which she shared about the seven hours she spent with Nichols. Upon its release, newspapers and television outlets immediately spotlighted Ashley's drug addiction and the fact she gave meth to Nichols.

"I expected some criticism for being completely honest," Ashley says. "I've received tons of e-mails from recovering meth addicts and their families encouraging me to raise awareness so others can get help."

In the future Ashley says she'd like to help other addicts come clean. She plans to work with Celebrate Recovery, a faith-based recovery program Rick Warren's church, Saddleback, founded in 1991.

"I feel as though God wants me to be a role model for other meth addicts who are ashamed of the hold this drug has on their lives," she says. "I used to think God wasn't big enough for my addiction. Now I know he's big enough for any sin if we just believe and turn to him for help. We're all imperfect. And yet God uses broken people to do his work."

Corrie Cutrer is a TCW regular contributor who lives with her family in Illinois.

The Dangers of Crystal Meth

Ashley Smith is one of millions of Americans who have struggled with an addiction to methamphetamine, a drug commonly referred to as "ice," "meth," "glass," or "speed." Depending on its form, it can be smoked, snorted, injected, or even ingested.

A stimulant, meth gives users a euphoric rush before offering a sustained boost of energy. It also acts as an appetite suppressant, one reason Ashley says she became so dependent on the drug. As an image-conscious 20something, Ashley used it to keep her weight down.

One key ingredient in meth is pseudoephedrine, found in over-the-counter cold medicines such as Sudafed. Easy access to such medicine is one reason underground meth labs have sprung up across the U.S. and why many states now are passing laws requiring an I.D. be shown when purchasing a decongestant.

The effects of meth are devastating. According to the U.S. Drug Enforcement Administration, chronic use can cause violent behavior, anxiety, delusions, paranoia, and brain damage similar to what victims of Alzheimer's disease, a stroke, or epilepsy feel. Ashley experienced some of these effects firsthand. She thought terrorists were tracking her through her cell phone. And she almost died in a car accident when she thought she heard God's voice telling her to let go of the steering wheel.

"Crystal meth is so available, affordable, and addictive that people bottom out more quickly and at younger ages," said John Baker, founder of Celebrate Recovery, an addiction recovery program utilized by thousands of churches and prisons worldwide. Baker, a recovered alcoholic, says he's seen a rise in recent years in the number of meth addicts attending Celebrate groups. Where it took Baker 19 years to bottom out as an alcoholic, these days he's seeing people in their early 20s needing serious help. "After three or four years on meth, you're lucky if you're still alive," Baker says.

Celebrate Recovery places members in small groups based on their addiction, which could include a chemical dependency, sexual addiction, eating disorder, or financial problem. Recovered addicts lead all groups. The curriculum leads participants through recovery principles based on the Beatitudes and points to Jesus as the ultimate power behind overcoming addiction. "That's why the program has been so successful," Baker says. "The great thing is, people discover they're not alone. They're with other people who've been through it and have come out on the other side."