We love God because he first loved us . . . and had his heart broken.
Stephanie Voiland Rische 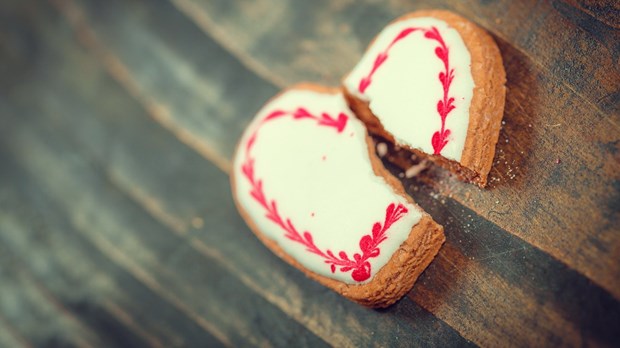 We all know it hurts to have your heart broken. And now they finally have the scientific data to back it up. Recent research from the University of California, Los Angeles, indicates that emotional pain may be more closely linked to physical pain than scientists previously realized. According to Naomi Eisenberger, lead author of the study, the distress from rejection registers in the same part of the brain that responds to physical pain, triggering similar sensations to, say, a broken arm. Which is just affirmation of what we've known all along: heartbreak hurts.

When our hearts are broken, we limp along, wondering how we ended up here and if we'll ever make it to the other side of the pain.

If you've had any prolonged exposure to other human beings, chances are pretty good that somewhere along the way you've had your heart broken. If not, hang on—you will soon enough. Maybe someone who promised to stick with you left with little warning. Maybe a close friend betrayed your trust or let you down when you needed her most. Or maybe you have that awful feeling in your gut that the person you love just doesn't love you back. When our hearts are broken, we limp along, wondering how we ended up here and if we'll ever make it to the other side of the pain. And perhaps worst of all, we feel utterly and helplessly alone.

But what I've been noticing lately in Scripture is that we aren't alone in this. God himself—powerful and holy as he is—knows what it is to have his heart broken. He isn't sitting up in the clouds somewhere, watching with detached interest as if we're some daytime TV show. He's fully engaged with us, pouring out his love on us and longing for us to love him back. When he made us, he could have created beings who were automatically loyal to him, who robotically returned his affection. But instead, he designed us with the will to decide how we'd respond to him, and in doing so, he opened his heart to profound love—and profound heartache.

So when we endure these heartbreaks ourselves—rejection, betrayal, abandonment—we don't walk through them alone. God has walked that road himself. And in some mysterious way, when our hearts are broken, we're given new insight into the very character of God.

The Sacredness of Being Rejected

The Old Testament is more than merely a historical narrative or a set of rules. Woven into the lining of each book, each story, is a common thread that reads more like a romance novel: God pursues his chosen people; they reject him and turn to less worthy loves; he keeps loving them anyway. Time after time, he does whatever it takes to win his loved ones back.

Ever since the beginning, we humans have been breaking God's heart. Adam and Eve had the unparalleled opportunity to walk in unbroken closeness with God, yet they rejected the relationship he offered in exchange for a hollow promise (Genesis 3). Since then, people have continued to turn our backs on God's love and faithfulness. Jeremiah recounts the way God aches over our rejection of his love: "They broke that covenant, though I loved them as a husband loves his wife" (Jeremiah 31:32). If anyone has felt the sting of rejection, it's God.

God designed us with the will to decide how we'd respond to him, and in doing so, he opened his heart to profound love—and profound heartache.

The Sacredness of Being Betrayed

Our God is not a stranger to the pain of betrayal, either. In one of the most heartbreaking illustrations recorded in the Bible, the prophet Hosea lived out a devastating parallel to God's relationship with his people. God instructed Hosea to marry Gomer, a woman who was compulsively unfaithful to him. Time after time she betrayed him, yet he consistently took her back, loving her against all logic, and, no doubt, the advice of his friends. God's message to his people was clear: By giving their affection to false gods, they were breaking his heart. Their betrayal was a slap in the face of his unconditional love and forgiveness. And perhaps we aren't so different today. We flirt with less worthy loves and continually break God's heart with our betrayal. And still he takes us back, his love as fierce as ever.

The Sacredness of Being Abandoned

When we find ourselves left alone by someone we love, there's comfort in knowing that God has endured that kind of abandonment too. At the end of Jesus' time on earth—arguably the darkest hour of his life—he was abandoned by his closest friends, the men he'd spent the bulk of the last three years with. As he was pouring out his grief to God, they were off napping. When he was being arrested, they were high-tailing it elsewhere to save their own skin. And when Jesus was on the cross, even God himself turned his face away, prompting Jesus to cry out, "My God, my God, why have you abandoned me?" (Matthew 27:46). Yes, he knows the agony of abandonment.

A Glimpse into His Heart

The past few months have been marked by some unprecedented heartbreaks for me, as I said good-bye to a particular person and a particular version of a dream. I don't know what your heartbreak looks like—if you're barely holding the fragile pieces together or if everything has shattered in so many places you don't even know where to begin. Needless to say, this isn't a road we would have chosen. But along the way, we cling to the hope that God just may redeem this heartbreak and, in the process, give us glimpses into who he is.

When you feel like your heart is broken beyond repair, remember that nothing about this place is ordinary. You are uniquely poised, at this very moment, to share an intimate part of God's character. It's the place of the broken heart, and it's sacred ground.