And what I learned because of it
Patty Kirk 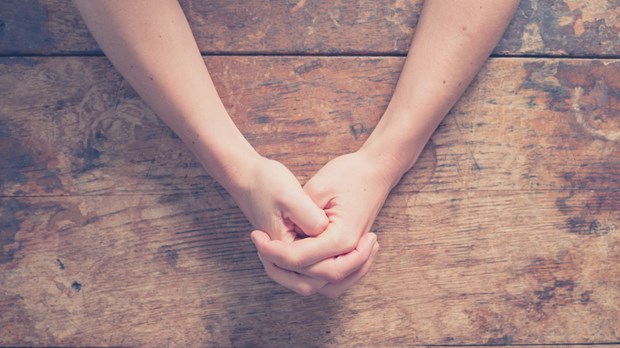 Ever since I became a Christian, I've worried about praying. Should I pray to God the Father? To Jesus? To the Comforter God sent to advocate for us after Jesus left our world? Should I favor unmistakably sacred topics—gratitude, praise, others' salvation—over my daily worries and complaints? And how, precisely, does one go about conversing with someone not physically present?

Expert advice on prayer abounds. At the Christian university where I teach, chapel speakers promote everything from praying directly from Scripture to "just being quiet and listening." Orthodox speakers recommend the "Jesus Prayer": "Lord Jesus, have mercy upon me, a sinner." Other speakers say prayer is simply a conversation with God, and I think, Simply?! Just a regular old conversation with someone I can't see, hear, or touch, and whose voice is so tricky to sort from others', especially from the voices of my own hopes and fears?

My measly prayers typically amount to internal gasps of Help! in a crisis or middle-of-the-night anxieties I call "pray-worrying." Occasionally I add a perfunctory—and usually long overdue—remembrance of someone else's problems. Or let out a "Wow!" in recognition of some dazzling evidence of God's creativity. Sometimes, though, I go whole days without conversing with God at all.

I'm especially ungifted in the area of public prayer. I covet others' ability not only to remember long lists of others' needs but to reformulate them into communiqués that don't sound, as mine do, wacky or false.

And whether I'm praying publicly or privately, I seem incapable of praying for very long. After a minute or two, I get distracted. In bed, I fall asleep. At church, I find myself gazing over the bowed heads around me, trying to remember if I turned off my daughters' hair straightener. Although I'd like to follow the apostle Paul's advice to pray continually, I can't do it.

Once, on a plane trip, I sat next to an elderly woman wearing a funny little diaphanous bonnet. When I asked about it, she called it her "prayer hat" and said she wore it because the Bible says to "pray without ceasing" (1 Thessalonians 5:17, NRSV) and that women should cover their heads while praying (1 Corinthians 11:5-6). She was a sweet, earnest woman, and I wondered if, somewhere beneath our conversation, she was praying for me even then. I hoped so. Later I discovered she was. We'd exchanged addresses, and she sent me occasional letters over the next years saying she was still praying for me.

I wish I could pray as she did: for a stranger, years after a chance meeting, continually, and with childlike confidence in even the oddest passages of Scripture.

I can't seem to maintain a regular "quiet time with God," as friends call their prayers. Some of them have devotions every morning, following a reading schedule—the Bible in a year's time or a devotional anthology—that keeps them on track. One friend has a devotional teatime, filling an extra cup to visualize God's presence. My husband reads a daily Bible chapter over breakfast. I try to follow his example but soon find myself mechanically grading those last three papers or reading one of the magazines accruing on the breakfast table. I am, in short, a failure at prayer.

Are Some Prayers Better?

I also suffer from prayer envy. I wish I could pray with the steadfastness of my friends and husband. I wish I could pray like Moses, Hagar, and even Cain, whose conversations with God sound as natural and normal as if the Creator of heaven and earth stood before them in the flesh. I long to pray with the abandon of certain students, who lift their hands or cup them reverently. I've tried to mimic their gestures, hoping to share the accompanying feelings of rapture, but even in private I just feel embarrassed.

I envy even the prayers of my own childhood: blithe, stream-of-consciousness commentaries on daily life—Oops! Oh no! Please help me! Let me not get in trouble!—to an always interested God aware of everything going on in my life at every moment. I wish I could pray with such trust and candor still, instead of stressing about whether my prayers are adequately holy.

Often I pray about praying itself, thinking to hope into happening what an old farmer once told me had happened to him. As he matured in faith, he told me, God had changed his "want-er."

Change my "pray-er," I've begged God. Make me desire your will, instead of the handy miracles I prefer. Make me pray bigger, longer, less selfishly, more trustingly, more constantly, more as you would have me pray.

One kind friend reassures me that however one prays is okay, but all the prayer advice out there argues otherwise. Also, I know from other friends that I'm not alone in worrying about prayer. We're like the disciples, for whom praying clearly did not come naturally. They begged Jesus to teach them to pray. They failed to cast out demons because they didn't pray enough. In Gethsemane, when Jesus expressly asked for prayer, they fell asleep. Jesus himself suggested that some prayers are better than others. Responding to his disciples' plea for instruction, Jesus gave them the Lord's Prayer—and believers ever since have debated whether he intended it as a conversational model or a prayer to be memorized and recited. Jesus faulted a Pharisee for praying too ostentatiously and commended a tax collector who, "standing far off, would not even look up to heaven" and prayed, in essence, the Jesus Prayer: "God, be merciful to me, a sinner!" (Luke 18:13, NRSV).

My best prayers, I think, are borrowed. Sometimes, in remorse, I find myself unconsciously mouthing the Act of Contrition of my Catholic childhood: "Oh my God, I am heartily sorry for having offended thee!" Or silently reciting from the Mass, "Lord, I am not worthy to receive you, but only say the word and my soul shall be healed." With the father of a demon-possessed boy, I whisper into my skepticism, "Help my unbelief!" (Mark 9:24, NRSV). And I often pray the little girl protagonist's prayer in Flannery O'Connor's short story, "Temple of the Holy Ghost": "Hep me not to be so mean."

Listening to Myself Pray

Once I got an e-mail from a former creative writing student who, in the wake of several personal disasters, had stopped believing in God. In his e-mail, he reported his life was shaping up and his faith slowly returning. He'd also started writing again—"weird little devotional essays," he said, like those he remembered me reading aloud in class.

"Does it ever seem to you that your writing is prayer?" he asked.

His question was transformational. Afterward, I felt as though this struggling young believer gave me my prayers—not just my weird little devotional essays but all the other prayers I'd been praying all along. Self-centered, semi-conscious pleas for help I send up whenever I'm in trouble. Botched efforts to pray through lists of others' needs. Even the set prayers I memorized as a child that rise unbidden from my regret. All are efforts to acknowledge God's presence. All are, in other words, prayer. Failed prayer, yes. God knows my prayers are vain at times, often ridiculous, always malfocused and inadequate, at best mere mindless moans.

Indeed, as Paul points out, "we do not know how to pray as we ought" (Romans 8:26, NRSV). Our most effectual prayers, he says, are little more than "groaning as in the pains of childbirth" along with the rest of creation (Romans 8:22). Never-theless, he assures us, "the Spirit helps us in our weakness" and "intercedes for us with groans that words cannot express. And he who searches our hearts knows the mind of the Spirit" (Romans 8:26-27).

It seems strange to me that Jesus, who so often preached on the subject of prayer, left it to Paul to offer us that encouragement. One straightforward bit of prayer advice Jesus offered heartens me, though: "Whatever you ask for in prayer, believe that you have received it, and it will be yours" (Mark 11:24, NRSV). Interestingly, Jesus doesn't say, "believe that you will receive it," but rather, "believe that you have received it." The tense difference argues that God isn't only listening to us when we pray but has been listening all along.

And that is the promise that informs every prayer I manage to groan out these days. In the asking, Jesus says, we've already received what we desire, although we don't yet know it.

Sometimes, listening to myself pray, I sense God listening, too—now mourning with me, now agreeing, now hoping I'll see things differently. In my imagination, God stands invisibly before me, not interrupting, not saying anything, not making any sound at all, but just breathing my prayer in, like air. In such moments, the most essential prayer that underlies all prayer—the prayer for God's company—has, in the praying, already been answered.

Patty Kirk is an adjunct professor of English at John Brown University and is author of Confessions of an Amateur Believer (Thomas Nelson). www.amateurbeliever.com