There’s something freeing when we call sin what it is in our lives.
by Kelli B. Trujillo 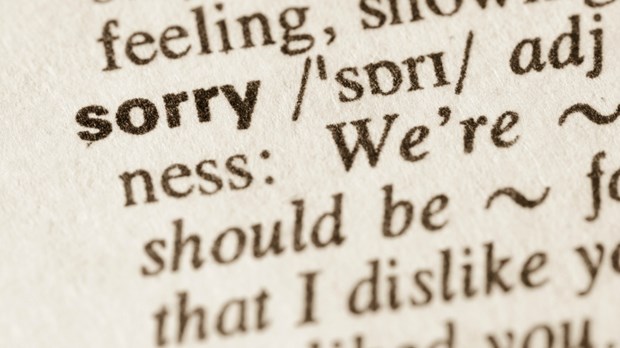 A few years ago amid swirling rumors of Tiger Woods' infidelities, newsman Brit Hume waded in with a bold claim about Christianity: "The extent to which [Tiger] can recover seems to me depends on his faith. . . . I don't think [Buddhism] offers the kind of forgiveness and redemption that is offered by the Christian faith. My message to Tiger would be, 'Tiger, turn to the Christian faith and you can make a total recovery and be a great example to the world.'"

Many were up in arms about Hume's direct on-air promotion of Christianity—but what struck me most was the aspect of Christian faith that Hume drew attention to. It wasn't God's love or how we're made in God's image or even about God's wonderful plan for your life. It was the desperate need we sinners have for forgiveness and redemption.

It's a message that's become rare in the American church. Of the multitude of post cards I receive in the mail marketing various nearby churches (and trust me, I get tons), I've never received one that says, "Come to our church where we invite you to look long and hard at the deep, dark, and shameful parts of your life and declare 'I'm wrong and sinful!'"

Squaring off with our deepest secrets and crippling feelings of guilt is exactly the opposite of the pat-on-the-back, you're-so-great message that American culture has taught us to expect. Yet as Hume dared to claim publicly, there's something freeing and very appealing in the Christian message that calls sin sin and provides an avenue of forgiveness and absolution.

"One of the greatest longings of our generation," writes Gordon T. Smith, "is for someone to explain how we can be forgiven of the guilt we feel." There is, indeed, a surprising delight in confession.

For millions of Catholics world-wide, confession is a sacramental practice in which a penitent Christian recounts for her priest the sins she's recently committed. He may provide some counsel; he will likely recommend some act of penance (saying certain prayers, for example); he will declare that person forgiven in Jesus' name.

Protestants rejected this form of confession back in the Reformation—and for many of us, the closest we've come to a confessional booth is seeing one in the movies. Protestants insist there need be no middleman—a believer can confess directly to God. Yet unfortunately many of us end up neglecting the practice of confession altogether. We prefer to lightly gloss over or ignore our sins, knowing they're "covered" by God's grace.

Yet Scripture urges us to confess (see and ). We're called not just to confess our sins at the moment of conversion, but to do so throughout our life as believers.

If it's not in a booth behind a curtain with a priest, then what can confession look like for us? It may be kneeling in prayer at one's bedside or scrawling in one's journal; it may be sitting at a coffee shop with a friend (and lots of tissues) or answering accountability questions with a small group; it may be reciting a liturgical confession with your congregation; it may even mean making a public statement in front of a large group of believers. However we do it, confession is an important part of growth for every Christian—without it, we can grow prideful and self-reliant, becoming spiritually stuck and floundering in our faith.

What role does confession play in your spiritual walk? How has it been liberating for you? Why do you think we so often tend to avoid confessing our sins to God or to others?