Is it really worth chasing after the American Dream?
Helen Lee 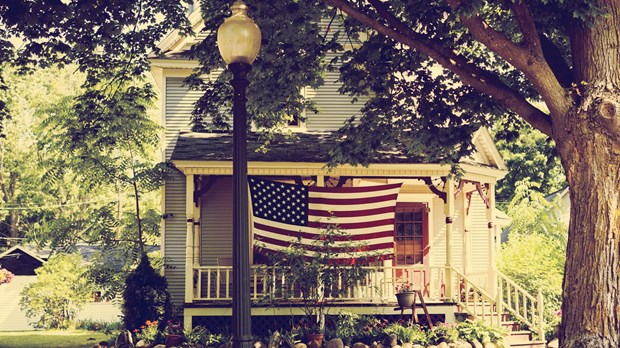 "If you've been calling yourself a Christian, you should stop."

This thought-provoking sentence appears in the book The Big Idea, coauthored by Dave Ferguson, Jon Ferguson, and Eric Bramlett. Let me share some more choice nuggets from this book:

The last thing the mission of Jesus Christ needs is more Christians . . . Eighty-five percent of the people in the United States call themselves Christians. But how are those 85 percent doing when it comes to accomplishing Jesus' mission? Research tells us that North American Christians . . .

In fact, when the Barna Research Group did a survey involving 152 separate items comparing the general population with those who called themselves Christians, they found virtually no difference between the two groups . . . If the contemporary concept of a Christian is of someone who is no different from the rest of the world, is Christian really the word you want to use to describe your willingness to sacrifice everything you have to see God's dream fulfilled? No way.

The Ferguson brothers are not trying to be heretical, but they are calling attention to the fact that Christians are often hard to identify in today's society—or if they do stand out, they stand out for less-than-admirable reasons. For example, novelist Anne Rice recently announced on her Facebook page that she had decided to "quit being a Christian" because she no longer wanted to belong to a "quarrelsome, hostile, disputatious, and deservedly infamous group." Neither invisibility nor infamy reflects what Jesus would want to see from his bride, I imagine.

In contrast to many of today's Christians, Jesus was both alluring and yet as rebellious against the prevailing culture as he could be. He challenged just about every cultural norm of his time, by fraternizing with those who were thought to be "unclean," refusing to bow to pressures of legalism from the ruling religious leaders, and championing and supporting women and children throughout his ministry. And yet, unlike the way Christians are perceived today, Jesus drew such a following not just because he performed amazing miracles but because he lived in a manner utterly unlike anything people had ever seen. His words are as radical and challenging today as when he first uttered them. Take, for example, the famous Sermon on the Mount in Matthew 5. Here are the words and phrases describing those who will be called "blessed" in Jesus' value system:

• hungering and thirsting for righteousness

This is not the kind of list that resembles the American dream, which proclaims the right of every American to have "life, liberty, and the pursuit of happiness." Author, activist, and speaker Shane Claiborne writes about this supposed ideal in his book The Irresistible Revolution: "I know plenty of people, both rich and poor, who are suffocating from the weight of the American dream, who find themselves heavily burdened by the lifeless toil and consumption we put upon ourselves."

And yet for those who follow the countercultural way Jesus prescribed, the benefits are compelling. These Christ followers:

• will be filled with righteousness

• are called sons of God

Yet how many Christians today wake up and pray that God will help them become poor in spirit or persecuted?

These blessings sound completely opposite to the burden and oppression, as Claiborne describes them, felt by those laboring after the American Dream. Yet how many Christians today wake up and pray that God will help them become poor in spirit or persecuted? How many feel thankful when conflicts arise so they can be peacemakers or grateful for a loss so they can mourn? How many of us really want to be the kind of people with the qualities Jesus lists in the Beatitudes? It's hard to ask for things such as greater persecution or mourning in our lives. When we grasp how difficult it is to live as Jesus asks, we can better understand why today's Christians do not look much different from the rest of the world. Somehow we have gotten our concept of what the true Christian life is all about confused with the cultural messages of our day.

As Os Guinness writes in his book The Call, "For many believers the Christian life is now the good life." And, sadly, he does not mean that in a positive way. Jesus puts it even more forcefully, describing what the fate should be of those Christians who no longer exhibit the qualities of "salt and light" described in Matthew 5: "But if the salt loses its saltiness, how can it be made salty again? It is no longer good for anything, except to be thrown out and trampled by men" (Matthew 5:13).

One reason we may have lost the desire to pursue the kind of Christianity the Bible calls for is that we have not understood the concept of sacrifice. By today's cultural standards, "sacrifice" should be avoided, except if you are a member of the armed forces or anyone else who serves in potentially life-threatening situations, in which case we applaud your willingness to sacrifice for the rest of us. But all Christians are called to a life of sacrifice. When Jesus told the disciples to follow him, he did not give them the option to select what parts of the Christian walk to accept or avoid. We cannot embrace all the loving, comforting verses of Scripture without simultaneously owning the difficult ones such as, "If anyone would come after me, he must deny himself and take up his cross and follow me" (Matthew 16:24; Mark 8:34; Luke 9:23).

Related to the idea of sacrifice is the idea of discomfort. Making sacrifices and denying oneself usually means experiencing discomfort of some kind. But it's hardly human nature to seek out the uncomfortable option! We naturally want to live in neighborhoods and homes that are comfortable, go to churches that feel comfortable, and build relationships with people who make us feel comfortable. In Dave Goetz's book Death by Suburb, an unabashed critique on Christian living in suburbia, he tells the story of a woman who "yanked her first child out of school after his kindergarten year, transferring him to a Christian grammar school. The woman apparently felt uncomfortable with all the kids from 'the apartments' in little Johnny's class. 'Too diverse,' she said. 'Besides, don't kids at the Christian school end up getting better SAT scores?'" This woman was unable to see that her decisions were driven less by a Christ-centered perspective to love others and seek first after his kingdom and more by cultural messages to seek after success and comfort.

I confess that seeking after comfort is certainly an issue for me. When I was a child, my parents would often take time on spring Sunday afternoons to drive around nice neighborhoods in our suburban Maryland town and visit houses that were for sale and open for viewing. They dreamed about a day when they could afford such houses, which was their concrete way to establish that, as immigrants, they had successfully achieved the American Dream. I remember one fabulous residence with a beautiful, calming, rectangular fountain in the foyer (fish not included with house), reminiscent of the Reflecting Pool at the Washington Monument. The living room featured a spectacular wall of windows overlooking a wooded, private backyard sanctuary. The house had more bedrooms and bathrooms than our family of four would ever need and a basement wine cellar stocked with hundreds of vintage bottles (wine not included either). The price tag for this piece of serenity and luxury? $1.2 million, and that was back in the 1980s!

Even at a young age, I could appreciate that $1.2 million was a lot of money. Although I never thought of myself as an overly materialistic person and even told my parents that "I don't need to live in a house like that," I would also repeat a mantra I have carried with me since then: "I just need to make enough to be comfortable." Now I am coming to realize that my desire for comfort reflects a spiritual fragility, an under-willingness to live a life of sacrifice and potential discomfort to which Jesus is calling me. Once you begin to desire to be comfortable, your measuring stick of what is "comfortable enough" starts getting bigger and bigger. It's much harder to reverse your upwardly mobile direction and pursue a less comfortable option. The more comfortable we become, the more comfortable we want to be.

The great irony is that as we seek after a life comfortable by the world's standards, we become more and more weighed down by the burden of seeking it. Dave Goetz tells another story of a man who complained about a speaker he had heard at church. The speaker had challenged the men to "get out of their comfort zones," to which Dave's friend said, "What comfort zone? I work all day in the corporate world, try to be a father and husband, and tithe and give some time to the church. If there's a comfort zone in that, I want to know about it!" But sometimes the reason today's Christians take little comfort from their everyday lives is that they are pursuing the wrong kind of comfort. Some people feel the great weight of trying to "keep up with the Joneses," and work more and more hours to provide what they think their family must have in order to be comfortable.

Taking on Jesus' yoke is not comfortable.

Jesus, as you might imagine, has something to say about where true rest and comfort come from. Consider His words about His yoke in Matthew 11:28-30: "Come to me, all you who are weary and burdened, and I will give you rest. Take my yoke upon you and learn from me, for I am gentle and humble in heart, and you will find rest for your souls. For my yoke is easy and my burden is light." Shane Claiborne says about this passage, "People take that to mean that if we come to Jesus, everything will be easy . . . [but] if our lives are easy, we must be doing something wrong." According to the passage, we attain Jesus' promise of encompassing spiritual rest once we put on Jesus' yoke—and yokes, if you have ever seen them on oxen, for example, don't seem very comfortable to wear. As we follow Jesus' way of life, he will most certainly challenge us. Taking on Jesus' yoke is not comfortable. Life will be tiring, it will be costly, and it will be hard. But, in another paradox of the Christian life, what may initially seem difficult and uncomfortable will result in "rest for our souls." We will gain the incomparable spiritual peace that Jesus promises, whatever our particular circumstances might be.

Missional moms understand that living sacrificially and eschewing comfort as a goal will result in their lives looking difficult and challenging to those of us unused to such a countercultural approach. Missional moms have to make some tough choices, but even as they live with certain discomforts they experience the goodness of life in a way that sustains them more than any dream house ever could.

Excerpted from The Missional Mom: Living with Purpose at Home & in the World by Helen Lee. Copyright 2011 by Helen Lee. Used with permission from Moody Publishers. All rights reserved.

Helen Lee is a TCW editorial advisor, an associate editor with InterVarsity Press, and the author of The Missional Mom. Helen lives in Chicagoland with her husband and three boys.