It gave our marriage a great start.
Stephanie Voiland Rische 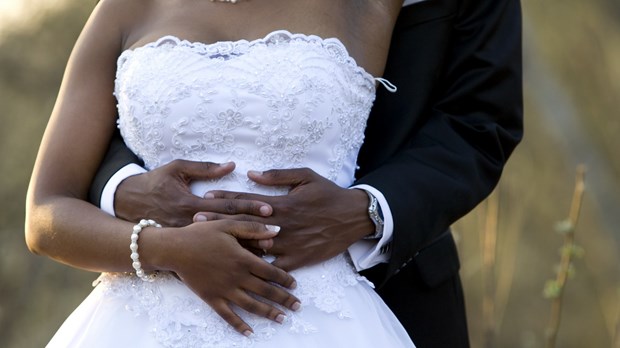 Dad's toast at my wedding probably didn't make much sense to anyone else in attendance that night. But for me, two complete stories were wrapped up in his small phrase—one that spanned the past three decades and one that was yet to be written.

Dad looked at Daniel and me as we sat, surrounded by all the people who loved us most, and offered these words of wisdom: "Pop the balloon."

Not exactly what you might expect to hear from your father in a moment otherwise marked by white tulle and champagne.

Unless, of course, you knew my dad.

When I was in high school, I joined the track team. For some inexplicable reason, despite my sub-five-foot frame and short legs, I decided to take up the high hurdles. Dad, always my number-one fan and self-appointed coach, watched as I trailed the other runners in race after race.

One night, after arriving home from a particularly demoralizing meet, Dad was giving one of his pep talks. "You're not supposed to float over the hurdles," he told me, winding up to his trademark intensity. "You're supposed to attack them! Stop making it so pretty!"

Inspired by an impromptu object lesson, he seized a leftover birthday balloon from the kitchen and taped it to the wall. "All right," he said. "I want you to pop this balloon . . . with your stomach."

What? I gave him my best 15-year-old "you're off your rocker" eye roll.

I shrugged, knowing there was no point in arguing when Dad got this excited about something. I took a few steps back and launched myself toward the balloon. But as soon as my stomach made contact, I immediately bounced back. Everything in my brain was telling me to hold back, that if I really went into this full force, I would find myself eating wall.

After several more attempts and my share of frustrated tears, I made the declaration that this was officially impossible. Then my little sister, eight years my junior, who had been eyeing everything in silent concentration, asked if she could try.

Not wanting to be shown up by a first grader, I took a big breath. I'm doing it this time, I told myself. I'm going through the wall.

I closed my eyes and surged forward. The next thing I heard was the glorious sound of exploding rubber. I jumped up and down, alternately squealing in delight and eyeing the balloon remains scattered across the kitchen floor. I couldn't have been more elated if I'd just gotten a blue ribbon at the biggest track meet of the year.

Prior to every race thereafter, Dad would give me a fist bump and offer a simple pre-game pep talk: "Pop the balloon."

The phrase became a code of sorts between us. Whenever something daunting came my way—when I had to give a speech in front of a stadium full of people at graduation, when my parents dropped me off in a strange city for college, when I interviewed for my first job, when I bought my first house—my dad, man of few words, would catch my eye and say, "Pop the balloon."

So on the cusp of saying, "I do," I shouldn't have been surprised that Dad would give me away with his now-classic catchphrase.

At the time, I had a vague sense of what he was talking about. But in the glowy, candlelit evening, my hand clasped by a handsome man who wanted to spend the rest of his life with me, my heart felt so full it was liable to burst. I wasn't naive enough to think we would be the first couple to never face conflict or deal with tough situations. But that night I really couldn't imagine anything that would necessitate a balloon-popping session.

That was almost a year ago, and I'm realizing already that Dad was onto something. Real life has a way of forcing its way in and trying to sabotage even the truest of loves, the sweetest of honeymoons. In the span of just eleven months, the ceiling by the skylight has sprouted some funky-looking mold, the student loans are begging for attention, and there's a looming job decision to be made. Two calendars need to be wrestled into one; two bank accounts need to converge. And there are balances to be struck—the introvert and the social butterfly, the planner and the one who flies by the seat of her pants, the timely one and the one who is always trying to squeeze in one last thing. And that's just the low-level hurdles.

I know, too, that this is only the beginning, that there will be other, larger balloons that need popping in the future. But as my dad's words echo in my ears, I know it will be worth the effort. The prize, after all, isn't just some trophy at the end of the race; it's about who we're becoming in the process. Somehow, in the midst of the balloon-popping, God is refining us, stretching muscles we didn't know we had, coaching us to leap over obstacles we thought were impossible to overcome.

The Bible compares faith to running a race, and what is marriage if not a daily act of faith? Like any good race, marriage requires perseverance. It demands that we keep running well past the point where we're tired and ready to quit. And yes, some days we have to close our eyes, put our chin down, and head straight into that wall we find ourselves up against.

It may not be pretty, but together we can press on as we run this race. Together we can attack each hurdle. And all along the way, our Father is there on the sidelines, coaching us, cheering us on, calling us toward the finish line: "I press on to reach the end of the race and receive the heavenly prize for which God, through Christ Jesus, is calling us" (Philippians 3:14).

Shortly after we returned from our honeymoon, Daniel and I were discussing the "pop the balloon" speech when suddenly my eyes widened. "Wait!" I exclaimed. "You've never tried it before!"

I rummaged around in the closet until I found a big balloon and some Scotch tape. Then I launched into my best imitation of Dad's post-meet pep talk. "It's all about mind over matter," I said, getting ready to hurtle myself full force into the balloon. "You've got to go through the wall!"

The popping sound felt particularly gratifying, and I immediately turned toward Daniel as I went into my celebratory dance, pumping my arms in exaggerated glory. When I looked at his face, I was a little put out to notice that he didn't seem nearly as excited over my victory as I was. Even worse, he wasn't looking at me—he was looking over my shoulder. In the direction of the wall.

"Yeah, you went through the wall all right."

I paused my gloating momentarily to glance over my shoulder. Sure enough. There was a perfect square indented into the drywall.

Well, I guess this was as a good a time as any to start practicing the words of Dad's toast. How would we deal with this little hurdle together?

Later that night we made a phone call to my dad.

"Umm, Dad, we have good news and bad news," I began. "The good news is, I popped the balloon. The bad news is . . . well, are you free to come over on Saturday with a bucket of Spackle?"

Stephanie Voiland Rische is a senior editor of nonfiction books at Tyndale House Publishers, as well as a freelance writer for publications such as Today's Christian Woman, Christian Marriage Today, and Significant Living magazine. She and her husband, Daniel, live in the Chicago area, where they enjoy riding their bikes, making homemade ice cream, and swapping bad puns. You can follow Stephanie's blog, "Stubbing My Toe on Grace," at StephanieRische.com.