Marriage is more about unity than control.
Jerome Daley 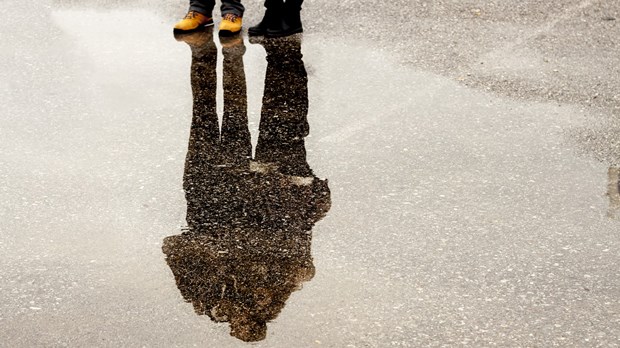 Anytime you take two or more individuals and link them together in a team—a business team, a church team, a marriage team—there will be a certain amount of friction. Every person has his or her perspectives, passions, strengths, and history that rub against the perspectives, passions, strengths, and history of others in the group.

Too often, marriages operate like a tension-filled committee of two in which each committee member is bent on gaining the upper hand. Instead of living in oneness, the couple lives on a battleground of power struggles, and authority is the casualty. But God designed a beautiful plan to empower couples in marriage and to release the God-given authority of marriage.

Where did he do this? In the Garden of Eden.

You Can Find Good Help!

What kind of helper did God have in mind? A personal valet? An executive secretary? The word helper is pretty ambiguous until you look at the original language. What the Hebrew reveals is nothing less than stunning. Helper is actually a two-word phrase: “ezer keneged.”

The first word is extremely powerful. It doesn't denote the menial help that comes from a slave or a servant; it's the rescuing help that comes from an ally who is more intelligent, more capable, and more highly resourced than you are. This is the "help" that Psalm 121 ascribes to God himself: "I lift up my eyes to the hills—where does my help come from? My help comes from the LORD, the Maker of heaven and earth" (verses 1-2).

This word ezer is so powerful, in fact, that God had to add a second word to it in order to make it fit his intent. The second word, keneged, means "equal." It completes God's idea of woman being an ally, an equally empowered partner with the man in the conquest of planet Earth. Author David Hamilton says that "if God hadn't added that word equal to the word ezer, we might have been . . . trying to prove that men could be leaders too!"

What emerges from God's heart in the creation of woman is—surprise!—the perfect partner for his "one flesh" mandate. There is no question that the woman is a partner worth leaving mother and father for! She is a partner who completes and complements so powerfully that Adam can confidently embark on the daunting adventure of "ruling" the earth as long as Eve is his equal partner.

It is precisely in the act of becoming one in marriage that God releases his authority within the relationship. There are, of course, various understandings of how authority is meant to flow between a husband and a wife.

The traditional model gives the husband the upper hand. Contemporary responses to that model occasionally reverse the hierarchy, placing the authority with the wife, particularly if she has the stronger personality of the two. But more often, contemporary models emphasize the independence of the two partners. Within this model, both the husband and the wife wield authority over their own separate lives, and they negotiate how they will manage the parts of their lives that overlap at home.

Both models generally miss the ideal that God elevates as his great desire for marriage. The familiar approaches all tend toward segmentation and separation rather than the authentic merging of two equally valued, equally resourced individuals. While the husband-as-authority model tends to empower one individual at the expense of the other, the separate-but-equal model ostensibly empowers both, but in reality it merely sets the stage for ongoing power struggles.

God's brilliance shines through these murky waters. Essentially, he says, "Until the two of you are able to recognize your inherent need for each other and you learn to fully value one another and bring your hearts into complete alignment, there will be no authority among you! But when you take on the humility of a servant and submit yourselves to each other, doing the hard work to hammer your different perspectives and ideas into a single, tempered vision, then I will release a flow of divine authority through your unity that will rock the gates of hell and advance the purposes of heaven on the earth!"

This flow of authority, birthed in unity, releases righteous power through a wife and a husband in every facet of their lives. Or, we should say, in every facet of life where this beautiful union has been fought for and made their own. This is the source of authority in oneness, the design that God gave Adam and Eve when he invented marriage.

Let's consider some of the scriptures that clarify God's passion to release authority in oneness:

"How good and pleasant it is when brothers live together in unity!
It is like precious oil poured on the head, running down on the beard, running down on Aaron's beard, down upon the collar of his robes .… For there the Lord bestows his blessing, even life forevermore" (Psalm 133:1-3).

There are few things as compelling and as elevating as unity among God's people. In Psalm 133, when David compared unity among likeminded partners to the anointing oil that covered Aaron's head and body, he was making a seismic statement: unity is the place of authority! The anointing of Aaron as the high priest of Israel released him into a place of unparalleled spiritual authority. And this same unity will release authority into the lives and relationship of couples everywhere.

Adapted from Not Your Parents' Marriage. Copyright © 2006 by Jerome and Kellie Daley. Used by permission of WaterBrook Press, a division of Random House, Inc.