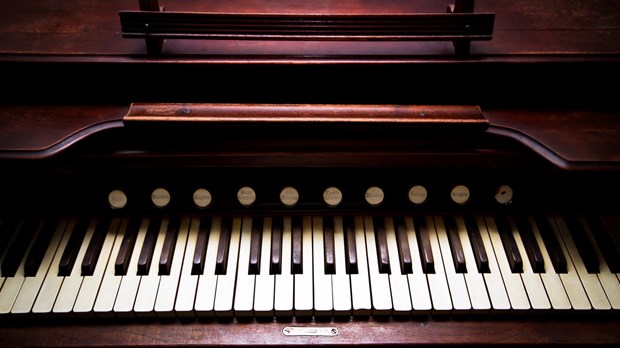 For nearly a decade, Irish hymn writer Kristyn Getty and her husband, Keith, have created a collection of worship music for churches to sing every Sunday. Since Keith joined with songwriting partner Stuart Townend to write "In Christ Alone" and "Power of the Cross," the Gettys began a journey of creating music they'd like to sing in church, and soon were described as pioneers of the modern hymn movement. Among other new hymns, Kristyn recently penned the lyrics to the celebrated children's Christmas carol, "Jesus, Joy of the Highest Heaven" and the tender lullaby, "A Mother's Prayer," a track on the Gettys' latest album, Hymns for the Christian Life.

Kristyn and her husband grew up in Northern Ireland and moved to the States seven years ago shortly after getting married. Since then they've shared their music at venues as diverse as the Dove Awards, The Third Lausanne Conference on World Evangelization, London 's Royal Albert Hall, and the Grand Ole Opry. They now live in Nashville with their two-year-old daughter, Eliza.

TCW asked Kristyn, 32, to describe their vision for creating music for the church, how songwriting and singing have shaped her faith, and why hymns are so important.

Where did your desire to write hymns originate?

Interestingly, we didn't set out to write hymns. My husband and I just decided in the beginning we wanted to create music we'd want to sing in church. Keith has a background in classical and traditional music, while I studied literature. We began writing songs that told a story. Our aim was to explore the full riches of the gospel through music. With each song we've created, two goals exist: we desire for the word of Christ to dwell richly in the believer's heart (Colossians 3:16), and that our music would be easy to sing for all generations and styles of churches. Eventually, our songs were described as a new type of modern hymn.

What defines a hymn?

I don't necessarily think there's a scientific definition. To us, a hymn isn't defined by a particular style or structure, but rather by its purpose and use and by answering key questions, such as, Is this a melody congregations can sing across the generations? Can this be sung with or without any music at all? Do the lyrics build up the church?

Why has creating music for the church been your main focus?

My father planted a church in Ireland when I was a girl, and I grew up understanding the important role that the local church plays in our journey as followers of Christ. The church is a reminder that the path we walk as Christians has been well trodden by generations of believers who've gone before us. The faith we hold is something that's been tried, tested, and never found wanting. I sing songs in church now that I sung as a little girl and I know were sung long before I was born. These are songs that connect generations of believers in proclaiming the good news, nourishing the church, and reminding us we are part of a story bigger than our own, yet includes our journey too. Every generation needs its music, and it's a privilege to join those writing hymns for the church today. The body of Christ is a singing church—it always has been and always will be.

How do you view your role as a modern hymn writer?

We're trying to strengthen the balance of all we could be singing about in church. If you look at the index in an old hymnal, you'll see songs that bring worship to Christ through a variety of categories, whether it's theological concepts, Christ's death and resurrection, the mission of the church, and so on. We have the privilege of reaching to all of this and unearthing the riches of what Scripture gives us to explore when it comes to worship. I deeply believe the words we sing on Sunday matter, in part because worship is commanded in Scripture. I also believe our singing becomes a type of apologetic to the watching world. The effect of a congregation robustly singing the truth of God breaks down walls and opens hearts. Additionally, we carry the words we sing on Sunday with us throughout the week, so music can provide a vocabulary for daily life.

What kind of vocabulary?

The kind that offers a patient, graceful response when a child awakes before dawn, or encouragement when we're trying to balance the monthly budget. Strength when exhaustion strikes, or peace when we face the fact we're getting older. Wisdom when we're contemplating how to share our faith with a neighbor. A thankful heart when we're distracted by momentary stress and tempted to become cynical or bitter.

Has music become an antidote for you during those kinds of moments?

Singing is medicine to my soul like nothing else. I became a Christian at a young age, yet even now I can sometimes forget the most basic tenets of the faith, including the fact that as a sinner, I'm worse off than I think I am, yet God's grace is greater than I'll ever know. One of the things I love most about music is how it reminds me of those truths. The song I probably sing most is "In Christ Alone." I wonder if it's because the Lord needs me to hear it again and again. I can easily wake up in the morning laden with guilt over a word unkindly spoken or because of the unhealthy fears I wrestle with at times as a mom. Then I feel as if I can't turn to the Lord with those failings. Now that's bad theology! But when I sing the lyrics: In Christ Alone, my hope is found/He is my rock, my strength, my song...No guilt in life, no fear in death/This is the power of Christ in me—then I know the Lord is breathing truth into my spirit. He uses the music to proclaim freedom to me, and prayerfully to others too, in the small moments of life in which we can get so easily bound.