Ever wondered if you could forego all animal products? Tips and guidance for pursuing a diet that focuses on loving our neighbors as ourselves
Maggie Olson 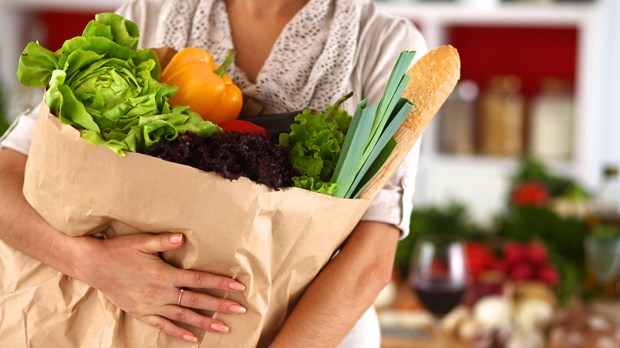 Want to stick out like a sore thumb? Go to a church potluck and fill your plate with nothing but fruit. Or veggies and hummus. Or, don't even bother with a plate—because, as a vegan, there may be nothing you can eat there.

"Why aren't you eating?"

A vegan is someone who eschews all animal products. Vegetarians don't eat meat, and vegans take it one step further. As a vegan, I don't eat meat, fish, eggs, or dairy. No cheese, no ice cream, no omelets. I also don't eat gelatin or honey, and I don't buy leather. If it comes from an animal, I don't consume it.

I get that a lot. Why would a person voluntarily give up bacon, pumpkin spice lattes, and macaroni and cheese?

Believe it or not, it all comes down to my faith. I pursue a plant-based diet so I can better serve God's creation: the animals, our neighbors, and the earth.

The Roots of Veganism

Let's start from the beginning. In Genesis, humans were given charge or dominion over the animals. But what does that mean—to have dominion? Household pets are fed, walked, and cared for; our society is outraged over animal abuse. So why is it that we ignore our God-given dominion over animals when it comes to food production?

Most of us know only vague details about the cruelty of factory farming, but the suffering is impossible to ignore. Cows endure milking machines latching onto their chapped and infected udders multiple times per day, extracting milk produced by repeated forced impregnation. Cows and pigs both experience depression and anxiety from being trapped in too-small gestation crates and pens, and frequently develop sores and infection from standing in their own waste. Male chicks, useless to the egg industry, are discarded en masse in dumpsters, where they either starve to death or suffocate under the weight of the other babies.

A healthy vegan diet can:

-Help with headaches, acne, and some mood disorders

These are the creatures created by God, the "livestock, small animals that scurry along the ground, and wild animals" (Genesis 1:24). These are the creatures over which God has given us dominion. God tells us, "clothe yourselves in tenderhearted mercy, kindness . . ." (Colossians 3:12). There is no compassion in factory farming, no kindness in the treatment of these poor creatures that God created. As Christians, we are called to reach out, to protest, to fight—not to affirm this practice for the sake of our own gain.

This compassion extends to our neighbor, as is stated in God's second greatest commandment: you shall love your neighbor as yourself (Mark 12:31). It's easy to forget about one's neighbor while standing at the deli counter or comparing prices on ground beef, but our food choices at the local grocery store affect our neighbors both near and far. Among those most heavily impacted are the economic lower classes, both at work and at home. Slaughterhouse workers face some of the most dangerous working conditions and lowest wages in America. Injuries incurred in slaughterhouses and packing plants are often ignored and underreported, leaving workers bankrupt or crippled.

Additionally, factory farms are hugely destructive and toxic to neighboring communities. Peter Singer, in his book The Ethics of What We Eat, writes about a family who lived near a factory farm. Their house was so overrun with pests that they caught up to 40 mice per day, and the air and water were so riddled with waste and disease that their little boy regularly became very sick; they even found maggots in his stool. These families are our neighbors, the ones we are called to love, and I can only think of them when I consider my call to heal the sick and remember the poor (Matthew 10:8, Galatians 2:10).

Land use affects the earth we walk as well as the neighbors we share it with. Producing a pound of meat uses 250 times more water than a pound of grain in an age when fresh water is already scarce. Between farm equipment, transportation, and processing plants, the factory farming industry kicks out more carbon dioxide than the transportation industry. As demand for meat grows, more and more acres of rainforest, native grasslands, and woods are being torn down to make way for farmland. More than 2,000 species have been declared endangered in less than 50 years, and the numbers are only growing. Millions of trees are felled every minute, reducing the amount of oxygen produced for the growing number of breathing lungs on the planet. Our God made all things to flourish, so when living things die by our behavior and our acts, we are not behaving in God's image as we were made.

Factory farming and high levels of meat consumption are wildly destructive to all that God has created. When God accused Israel of destructive and hurtful living and bloodshed, he said, "That is why your land is in mourning, and everyone is wating away. Even the wild animals, the birds of the sky, and the fish of the sea are disappearing" (Hosea 4:3). There is something sad in this passage, something parallel to the bloodshed and devastation that factory farming has on the people, the animals, and the land. There are so many steps we can take to care for God's creation; veganism is just one.

Here are some tips and tricks to pursuing a vegan diet—or simply reducing your meat consumption:

Meatless Mondays: Start small by declaring every Monday a no-meat day. Pack your kids' lunches with falafel or quinoa salad or homemade veggie burgers, and scour the internet for a fun new supper recipe.

Forget the tofu: You don't need to start eating chia seeds, tempeh, or seaweed in order to be a vegetarian or a vegan. Start off with fruits, veggies, and grains you're already familiar with before diving into the crazy stuff.

Don't fret about finances: Whole Foods isn't the only place to get vegan groceries, and a bag of rice is way cheaper than a pork chop. You can get everything you need at your local grocery store or bulk stores like Costco—you'll even save money!

Embrace larger portions: Vegan foods are usually lower in calories, so you'll need to adjust your eating habits to make sure you're well fed. (I eat my salads out of mixing bowls.)

Also, be sure to cut yourself some slack. In a perfect world, you could switch to a vegan diet overnight. But that's not how big changes work—make the transition in steps. I was a vegetarian for a year before I started eating vegan at home. It took six more months before I finally went 100 percent vegan and stopped eating eggs and dairy at restaurants and friends' houses. Many people say, "I could never go vegan! It's too hard!" But don't sell yourself short!

Anyone can go vegan, and with the Internet, it's easier than ever before. There are so many supportive communities, fantastic blogs, and mouth-watering cookbooks available to the aspiring vegan. If you're interested in joining me and thousands of others on our journey in healthy vegan living, here are some resources to help you on your journey:

The Happy Herbivore series is full of easy, simple, and delicious recipes, many of which are kid-tested and approved! If you're up for something a little fancier, Veganomicon is a great resource. If you're into desserts, try Vegan Cupcakes Take Over the World or Practically Raw Desserts. Looking for vegan versions of familiar comfort foods? Pick up a copy of Betty Goes Vegan. There are dozens more incredible cookbooks out there—find your favorites!

Forks Over Knives is a fascinating documentary about the health aspects of the vegan diet. Vegucated follows three people as they learn about the health and ethical ramifications and incorporate the diet into their own lives.

Chocolate Covered Katie has great dessert recipes, and I've never met a child who didn't like her baked oatmeal for breakfast! Healthy. Happy. Life. and Oh She Glows both have tons of recipes with beautiful photos that appeal to every palette. Other fantastic blogs include Carrie On Vegan, Post Punk Kitchen, Choosing Raw, Taste Space, and Vegan Mother Hubbard, whose author is raising two vegan daughters!

Use HappyCow.net to find vegan and vegan-friendly restaurants in your area, or surf the web for vegan meet-ups, potlucks, and festivals. Make friends with your fellow vegans and aspiring vegans; we have so much to learn from each other! Also, the Christian Vegetarian Association has a great newsletter and some helpful materials on their website.

As Christians, we are called to compassion and love. I have found that a vegan diet helps me live out that compassion, and provides me the opportunity to examine the real ramifications of my daily choices. Daniel and his men ate nothing but veggies while in King Nebuchadnezzar's palace, and "at the end of the ten days, Daniel and his three friends looked healthier and better nourished than the young men who had been eating the food assigned by the king" (Daniel 1:15).

Let us join the songs of praise sung by all that God has created, all that Jesus has saved. Amen!

"Praise the Lord from the earth, you creatures of the ocean depths, fire and hail, snow and clouds, wind and weather that obey him, mountains and all hills, fruit trees and all cedars, wild animals and all livestock, small scurrying animals and birds" (Psalm 148:7–10).