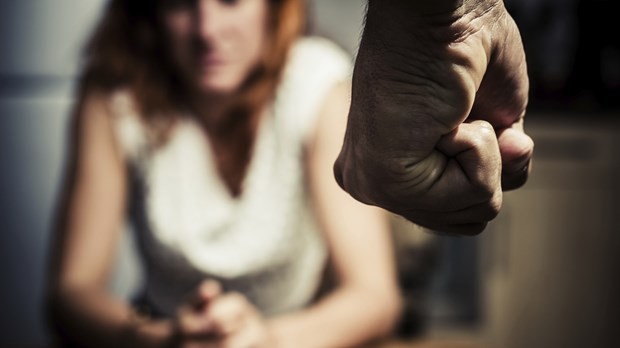 I watched out the window as the mailman pulled up in his mail truck. Mail was important to me. Being married to a military man was fine, but I did miss my siblings, Peggy in particular.

Seeing her handwriting, I grabbed the letter along with the other mail and ran into the house. Ripping it open, I read: "This is going to shock you, but I'm getting a divorce."

I felt like I did when the neighbor accidentally hit a softball into my stomach. I had to know more than those few sentences, so I dialed her number and waited. "It's me," I began.

But before I got those words out, she blurted, "I can't talk now—he's harassing me again!" The 2,000 miles between us seemed like a million.

"I'll pray," I said, hanging up the phone. The day dragged on until 10 p.m. when she called me back.

"Calling the police was easy," she told me. "I wish I would have done it sooner. I called [our brother] Gus and the police, and he left without a problem." Peggy then talked for about 20 minutes, painting a picture of their marriage. Then she said she had to go so she wouldn't run up the phone bill.

I immediately called her back and said, "Now, it's my dime—talk." And she obliged. I tried to remain calm as I listened to one story after another.

"Anne, you know that real estate exam I studied for?" she asked.

"Well I passed, but then he got upset when he saw me talking to a male coworker, so he made me quit.

'But when I came home, he had cut up all my new tennis outfits because he saw me talking to the instructor and accused me of having an affair with him.'

"Then I decided to take tennis lessons. I thought it would be something we could do together. But when I came home, he had cut up all my new tennis outfits because he saw me talking to the instructor and accused me of having an affair with him."

She told me about a family outing at a lake. "I had just come out of the water when he asked me how it was, so I told him the water was really nice and warm.

"'That's not what I was talking about,' he said. 'I saw the way you were looking at the lifeguard.'

"I told him, 'Please, the whole family is here.' But that didn't matter; nothing mattered when he got like that."

Listening to each story, I marveled at how Peggy had kept it to herself. To us, it looked like they had everything. They were on their third house in the suburbs, and they had three beautiful boys. They had everything. But things are seldom as they appear.

"I have to tell you what else he did," Peggy said. "I was at my friend's house because it was his weekend to be in the house with the kids. He called me up and asked if I was planning on coming home. I was curious, so I came home. When I got there he was in bed with another woman. In our bed, Anne!

"I got so mad. I saw a pie plate I had never seen before sitting on the counter. I picked it up to throw it at him when he said, 'Don't ruin that. She made it for me.'"

My stomach turned as Peggy relayed her stories. I didn't think I could feel any worse, but I was wrong.

'He would wait until the kids were asleep and hold a knife to my throat.'

She whispered, "He would wait until the kids were asleep and hold a knife to my throat."

The image made me freeze. I didn't know what to say. We finished our conversation. "I love you," she told me. "I love you too," I said.

Slipping into bed next to my sleeping husband, I wondered if I'd sleep at all.

A couple days later, my sister-in-law called. "Did you hear? Peggy's gone. No one knows where. Her husband said she just walked out."

Panic struck as I heard those words. In my conversation with Peggy, I had learned she had filed for divorce and was seeking full custody. She was looking for a townhouse in their same neighborhood. "I'm still going to let the boys see their dad," she told me. "He's their dad."

And now she was gone? I knew she didn't leave her boys.

Our nightmare started on September 12, 1982. But it was one that would last for years.

We weren't allowed to see our nephews. We thought about them all the time. Year after year went by with no communication. Then my brother Steve reached out and got permission for them to attend his wedding. It felt awkward to be reunited with these boys we hardly knew.

At another gathering, our nephew Bobby asked if any of us had heard from his mom. We stood there shocked at his question. "Bobby," I said, "we don't believe she's alive."

Our lines of communication were opened. The boys had been told their mother left them, so we began filling in many of their blanks and tried answering their questions.

Peggy's missing persons case was reopened as a possible homicide, and her husband was arrested.

In 2004, we sat and listened to testimony after testimony for nine days. It would soon be my turn. I was to identify her husband.

Led to an empty room, I waited for my turn. I started praying, asking God to help me. My prayers turned to hymns, and by the time the officer came to get me, I felt God's presence. I didn't walk in that courtroom alone; God went with me.

When I had to point to my brother-in-law, God steadied my shaking hand. When I was asked to identify the boys in photographs Peggy had sent me, God calmed my heart.

Those nine days in court were difficult but finally over. The room became deathly quiet as we waited for the verdict. The judge was ready, but were we?

We knew it wouldn't change things if he were to go to jail. It wouldn't bring her back. We sat and waited.

The other side of the courtroom erupted in cheers as family members gave high fives and hugs to her smiling husband. There was no celebration on our side.

We were quickly escorted out of the courtroom. I don't remember walking at all. And in another room, we tried to process what would take years.

When I was in my deepest pain, tormented by what my sister's last moments might have been like, God said to me, Anne, I was with her.

When I was in my deepest pain, tormented by what my sister's last moments might have been like, God said to me, Anne, I was with her.

Some could ask why God didn't stop the abuse if he was with her, but my answer to that is free will. We don't mind free will if we're talking about our own. But the truth is we have no control over what others do with theirs.

Domestic violence is real. It's messy, and some questions never get answered. We did have a memorial for Peggy even though we never found her body. Her death changed our lives forever.

If you or someone you know is in a situation where they are being abused, please get help. Don't try to handle things by yourself. And don't wait to share what's going on.

My sister did a lot of things right. She just waited too long.

Anne Peterson is a poet, speaker, and published author of Real Love, and most recently her book BROKEN: A Story of Abuse and Survival. She is also the author of 42 published Bible studies and 26 articles with www.ChristianBibleStudies.com, an affiliate of Christianity Today. You can visit Anne's website www.AnnePeterson.com or you can find her on Facebook.