How God found me during my years of infertility
Sara Hagerty 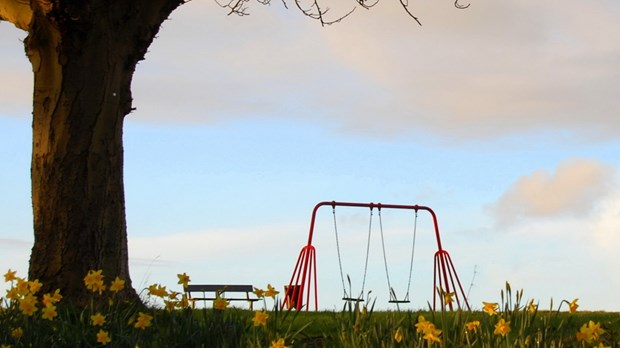 She leaned across the counter drawing me in with a glint in her eye that said I have something worth shouting, but it’s sacred enough that I’ll whisper.

I had seconds (not hours or even minutes) to prepare myself to not just receive but form a response to the kind of news that would often send me underground for days, in my heart.

“I’m pregnant,” the words her mouth formed matched the look in her eye. She was glowing, expectant in more than just her womb. “We’re having another baby,” she said—almost mischievously, as if her third pass through this rite of passage was carelessly conceived.

My friend’s accident had become the life-dream that evaded me. I’d never wanted what she had until I spent years without it and nothing I could muster could get it for me.

I faked thrill and felt sick on the inside. Did she momentarily forget my deepest heartache or, even worse, had I been waiting so long that she assumed I’d stopped wanting? Had she forgotten my pain? Was she going to acknowledge that this “happenstance” moment only highlighted my loss?

I wasn’t crying out to God from the depths of my ache or placing my bleeding heart in his hands; I was just jealous. And bitter.

It reminded me of the wedding I’d attended of a friend, just out of college, when my giddy girlfriends and I sat around the table moaning about what it would be like to be still single years from then, all of us ignoring the 50-year-old woman sitting with us who, herself, was single. She’s over it, I flippantly assumed when I had that fleeting thought that our conversation might have pained her. She can’t possibly still want that now, I thought callously.

So here I was, staring at what I wanted but couldn't have. I wasn’t crying out to God from the depths of my ache or placing my bleeding heart in his hands; I was just jealous. And bitter.

That night was toxic for my heart. She glowed and I seethed on the inside. It wasn’t just her gain and my loss, but her seeming negligence to the ache in my heart only allured me deeper into resentment. I rationalized it. Another friend mishandling the weakest parts of me. What was more painful? I wondered. Her womb being opened again or my having been overlooked by this friend caught in the glow of a motherhood I couldn’t access?

I climbed into bed that night and revisited a conversation I’d only recently been having with God. It felt like a stream of consciousness—a dissertation of thought—one that got interrupted occasionally by life but was always there. Instead of bitterness, though, I felt sadness. Somewhere underneath that bitter sheen I knew that vulnerability was my ticket out of a hard heart.

My heart slowly shifted, reading the words of Psalm 18 as if I was the writer. I spoke what I hadn’t felt, hours earlier, until my heart warmed to feel. “But in my distress I cried out to the LORD; yes, I prayed to my God for help. He heard me from his sanctuary; my cry to him reached his ears” ().

By allowing my heart to bleed, I was acknowledging with my life that he was safe enough to hold the frailest parts of me.

These ancient, inspired words gave language to my heart. Tears slid out of the corner of my eyes that were no longer fiery but heavy, and onto a page that was already warped from warm droplets spilled earlier in that same spot.

I poured everything out and talked to God as if he was a friend holding my hand, not a leader forcing me into this waiting room where I’d wonder when I’d get my turn. This conversation, vacillating between his Word and my (now) sobs washed me. He was near and that was enough. Intimacy, in this moment, was not so much that I physically felt his nearness but that I chose to open myself and be raw before him. By allowing my heart to bleed, I was acknowledging with my life that he was safe enough to hold the frailest parts of me.

Pain and New Connections with God

I spent nearly a decade in the waiting room of infertility. My friend’s announcement was one of dozens I’d absorbed over the years. The painful baby shower became visits to the birthing wing of the hospital and first birthday parties. I was becoming experienced at being sidelined.

As I flip-flopped between bitterness and the vulnerability that was opening me up to growth in God, I continued to clamor for a new grid. Why all this pain? I couldn’t wait until it was all over and my womb was finally opened or when I was that fully grayed woman who put all that ache behind her as just “something of the past.” I needed some sort of understanding for what was to be gained from these months (turned into years) in the waiting room if my heart was going to survive this.

I’d seen many who became jaded with life and carried a cool cynicism—and it felt a lot like a hardened heart when I tried it on for myself. I was at risk of becoming bitter.

But my asking was raw and real and messy. Sometimes my sobs were shouts; however, I continued to ask him for perspective, still believing that his Word had answers. And he was responding with passages that had been long neglected. The Word became alive to me when I had nothing else, and it was full of whispers about who God was to the broken. This deer panting for streams of water from seemed lyrical and mysterious to me when life was working, but when my body broke . . . I became that deer.

Saying his name evoked emotion and reading his Word felt less like I was approaching a historical text and more like I was tapping a vein. I was beginning to understand this ache and delay as God’s pursuit of my heart. He was awakening my insides while my womb lay dormant.

Pain had uncovered a hunger inside of me that I wouldn’t have otherwise identified. I wanted to know him and not just serve and follow him.

I couldn’t have both this kind of encounter with God and be bitter.

Pain had uncovered a hunger inside of me that I wouldn’t have otherwise identified. I wanted to know him and not just serve and follow him. I wanted to be the woman sitting at his feet, unkempt and spilling all of my livelihood upon him. My priorities had shifted in the waiting room. My priority was simple: it was him.

Fighting Off the Bitterness

Joseph said words to his brothers in that I’ve found myself saying to my own enemy: “You intended to harm me, but God intended it all for good.”

Are you also in the waiting room? Don’t waste this moment on a bitterness that allures but leaves you emptier than your circumstances. This moment is his holy entrance into caverns of your heart never before explored. This moment is made for conversation with God, for you to open yourself to his Word and his whisper. He’s maybe nearer than ever because you are finally giving yourself permission to pour out everything before him. He is nearer to the brokenhearted than we might ever allow ourselves to comprehend when our lives aren’t overtly broken.

Open up time and space to soak in his Word—not just at 6 a.m. when the kids are still sleeping or before your morning commute. You need him at noon and at 3 p.m. and 8 p.m., before bed.

These broken moments may just be your most glorious . . . if you let them.

Sara Hagerty is a wife, mother, and writer. She is the author of Every Bitter Thing Is Sweet and blogs regularly at EveryBitterThingIsSweet.com, where she focuses on finding joy in the midst of waiting. Sara and her husband, Nate, have five children and live in Missouri.