Hint: It's not about sexual temptation.
Rachel Marie Stone 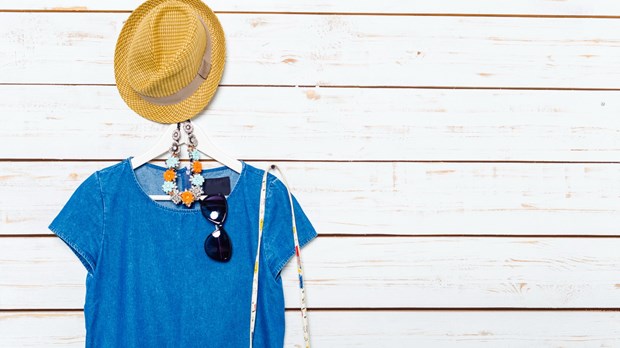 The tall woman in jeans and heavy eye makeup was wild-eyed and frantic. She carried a yellow legal pad with extensive notes scrawled in blue ballpoint pen, and couldn't wait to sit down with the pastor—who was my husband, Tim—and me to share what was on her mind.

"Women must dress modestly," she began. "Modesty is disappearing in our culture and it is up to Christians to uphold it." Then she started reading Bible verses off her legal pad and readying herself to deliver a passionate sermon.

"Wait, hold on," Tim said when the woman showed no signs of slowing or stopping what was turning into a rant. "What is it that you're concerned about? What do you want to discuss with us?"

He had a vague idea of what it might be because, several weeks before, this woman had loudly rebuked a female member of our church for being "inappropriately dressed" (which was entirely debatable).

As it happened, the woman wanted to discuss the dress I had worn to church the previous Sunday.

As it happened, the woman wanted to discuss the dress I had worn to church the previous Sunday. It was long enough, she said. (I hope so, as it touched the tops of my sandals!) But because I was wearing a denim jacket over it, she suspected it might be strapless. And that would be unacceptable.

"It has straps," I said, "but even if it was strapless, I didn't take off my jacket." (I was 21 years old at the time, which, I hope, partly explains why I felt the need to justify myself when I'd clearly done nothing wrong.)

"Doesn't matter. I couldn't tell that it wasn't strapless," she insisted.

The conversation became even less reasonable from there, and it is perhaps unnecessary to note that it did not end very well.

One point that my husband and I tried to make in our conversation with the woman was this: What is considered "modest" (or not) depends on your social and cultural context. Many Christian communities, for example, might find the woman's jeans and makeup inappropriate. (Consider what the early church father Tertullian had to say about makeup: "Whatever is born is the work of God. Whatever, then, is plastered on that, is the devil's work.")

The woman, however, was baffled that the Bible verses she'd brought did not make absolutely clear to us—and to everyone—what did and did not constitute modesty for everyone and for all time: in other words, a universal standard of modesty.

In a blog post for Recovering Grace—a website "devoted to helping people whose lives have been impacted by the teachings of Bill Gothard," Eric Pazdziora describes how attempts to define modesty according to the Bible often fall short—and trivialize Scripture in the process.

Reality TV personality Michelle Duggar's comments on dressing modestly exemplify the kind of trivializing approach to Scripture Pazdziora hints at: "We felt like we needed to be covered from our neck to below our knees mainly because God talks about the thigh being uncovered, and how that's nakedness and shame." She's probably talking about Isaiah 47, which predicts the fall of Babylon, and, you may not be surprised to learn, has pretty much nothing to do with what constitutes modest dress—and, furthermore, includes the removal of head veil as part of the "nakedness and shame."

But perhaps more significantly Pazdziora points out that kosmios, the Greek word for "modesty" means "well ordered" or "of good behavior." It's used twice in the New Testament, both times in 1 Timothy. Interestingly enough, kosmios is translated differently in each of those places. In 1 Timothy 2:9, when Paul is speaking of how women are to dress, it's usually translated as "modest:" "I also want the women to dress modestly, with decency and propriety, adorning themselves, not with elaborate hairstyles or gold or pearls or expensive clothes" (NIV, emphasis added).

But in 1 Timothy 3:2, when Paul's speaking of an ideal overseer for the church, the same word is instead translated as "respectable": "Now the overseer is to be above reproach, faithful to his wife, temperate, self-controlled, respectable, hospitable, able to teach" (NIV, emphasis added).

Whatever modesty means in the New Testament, it doesn't seem to be primarily concerned with how much skin is showing. Instead, it's about being appropriately dressed; dressing in a "well ordered" way.

Whatever modesty means in the New Testament, it doesn't seem to be primarily concerned with how much skin is showing. Instead, it's about being appropriately dressed; dressing in a "well ordered" way.

And what does that mean? At the risk of sounding at once old-fashioned and yet relativist: it depends. We might wear leggings around the house but not to the grocery store, for example, or wear a swimsuit on the beach but not to church.

It's easy for us to understand that certain occasions call for certain kinds of dress. It would be equally odd to wear an evening gown to help someone clean out a flooded basement as it would be to wear basement cleaning clothes to someone's wedding. But it is often harder for us to accept that what is considered respectable, appropriate, and well ordered in other cultures is not categorically "wrong."

I lived with my family for a year in Germany where nude sunbathing and communal (un)dressing rooms at the pool were considered completely normal. People are often uncomfortable when I say that I found the cultural attitude surrounding bodies freeing and normalizing: People come in different sizes and shapes, and those differences are barely worth mentioning, much less stressing over. (And perhaps not incidentally, I never saw anyone in Germany wearing pajamas, yoga pants, or bikini tops to the grocery store. I guess it was not considered appropriate and well ordered.)

A few days ago, I sat with my husband in the DMV waiting to get new driver's licenses; we just returned to the U.S. last month after a year and a half in Malawi, Africa. Because we clearly don't get out enough together without our children, it was sort of like a date, and I leaned my head on his shoulder and put a hand on his knee.

"It's so nice to be able to do this without scandalizing people," I said. In Malawi, women and men generally don't touch each other in public; it is considered rude. And neither would a woman and a man sit across from each other at the table. Why? Because their knees might touch.

And knees are sensual.

That's why, while on any given day in Malawi, you'll see a woman pop an entire breast out of her top and offer it to a baby and no one blinks. But if a woman walks by in jeans, a skirt that shows her knees, or—even more scandalously—in shorts, heads swivel.

I've been wearing a lot of long skirts over the past year and a half, not because I was ashamed of my knees or because I believe it is a universal moral imperative that women wear skirts. Just because given my context, it was polite.

One other thing has changed for me since I've been back: I put my engagement and wedding rings back on. It's not indecent or inappropriate to wear an expensive ring or two in the U.S., but in Malawi it would be an undue distraction. It would be immodest.

In the parable of the wedding feast in Matthew 22:1–14, the man who arrives not wearing wedding clothes is thrown out not because his clothes were wrong—Jesus would never advocate such superficial discrimination!—but because by not wearing the appropriate clothes to the wedding, he was indicating his disrespect for the king and for the occasion.

What constitutes well-ordered, appropriate, and, yes, modest dress ultimately does not have to do with changing details and rules such as whether the dress was indeed strapless or whether there is a bit of knee showing. Perhaps it's unpopular to say so, but dressing respectfully is the way I've come to think of it: not to draw undue attention, not in order to fade into the background but rather choosing to dress around others as I'd like to see them dress around me.

Like so many things, modesty is not so much a matter of skin, but of the heart.

Rachel Marie Stone is a regular contributor to Christianity Today's Her.menuetics site, and is the author of Eat with Joy: Redeeming God's Gift of Food. Connect with her at RachelMarieStone.com, or follow her on Twitter @Rachel_M_Stone.