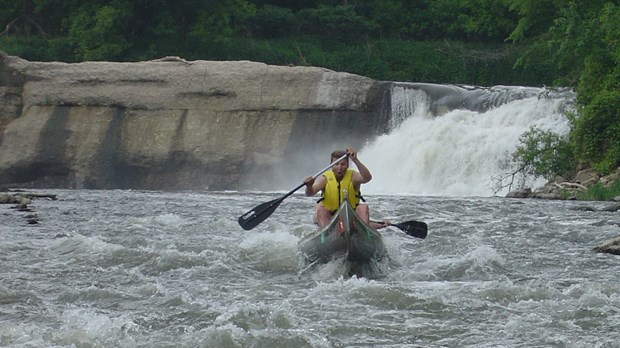 Our living room floor was littered with backpacking gear. As my husband, Corey, calculated each ounce of weight he was adding to his pack, I calculated ways to keep him from leaving.

Who was this guy I married anyway? This man who can’t go a year without either climbing a fourteener in Colorado or canoeing some Buffalo River rapids. This husband who would choose to abandon me for trips that I felt were a waste of time and money.

Each time he planned a new adventure, I grew a little more distant. And a little more cunning. In my mind while he was gone, I would run a hundred scenarios in which I had the opportunity to make him feel inadequate and guilt-ridden.

By the time he arrived home from whatever mountain or river or trail he was exploring, physically exhausted, but spiritually exhilarated, I was a loaded weapon—poised to shoot my ugly words and cold attitude at all the good things this trip gave him.

His “man-trips” brought out the “mean girl” in me.

By the time he arrived home from whatever mountain or river or trail he was exploring, physically exhausted, but spiritually exhilarated, I was a loaded weapon . . .

The Catalyst for an Attitude Change

Then one spring, he decided to build a canoe. In our garage. Our vehicles were demoted to the driveway. It was beyond my comprehension why he would want to do such a thing. As the construction supplies piled up in the garage, the ugly thoughts piled up in my head. Corey and the other woman, as I dubbed the canoe, were really starting to make me mad.

But one evening when I opened the door to call Corey in for dinner, I was struck by the look on his face. Intently focused on his task at hand, he looked peaceful. He was absolutely content, and I was absolutely bitter. I realized standing there in the doorway that I was becoming a person I didn’t like, and in doing so, I was trying to steal one of life’s greatest joys from the man I loved.

The Choice to Be Supportive

I was faced with a choice. I could support Corey or continue to drive a wedge between us until one of us broke. The decision was easy enough; the follow-through was not. Of course, in theory I wanted to support my husband, but that required something from me I wasn’t convinced I could do. I had to choose to be supportive when I didn’t feel supportive.

Making a hard choice and waiting for your feelings to catch up to what you know are the right actions is a painful process. But when I sought encouragement in Scripture, I found my dilemma to be a common one.

didn’t want to confront her husband the king for fear of being executed, but she chose to do what she knew was right. And God used her to save his chosen people from certain death. wasn’t thrilled about visiting Saul for fear that the Christian-hater would kill him. But he did visit, and God used him to give a new convert his sight back.

My circumstances were drastically less consequential. My fear was that if I began supporting Corey’s “man-trips,” I would lose him to the wilderness more often.

As I read more stories of biblical characters in situations where personal desires fought against right actions, I felt like God was whispering, Support your husband Kim. Trust me with this.

So I worked on being supportive, and as I did my selfishness was revealed. It’s always been easy for me to put Corey’s needs above my own when they don’t frustrate my idea of a happy home life. But when I can’t relate to or understand his needs, it is painfully difficult.

My fear was that if I began supporting Corey’s “man-trips,” I would lose him to the wilderness more often.

In practice, the only way for me to successfully combat my wrong attitude was to capture each bitter thought I had toward Corey, evaluate it, and let it go. Literally saying in my head (and sometimes out loud), Kim, that thought is not based on truth. Drop it. Sometimes I failed. Sometimes I let the bitterness hang around just under the surface so I could pull it out when he ticked me off.

The Truth I Needed to Hear

In the midst of my struggle, a friend gave me a copy of John Eldridge’s Wild at Heart, and the content of that book rocked my world. As I devoured the text, my faults became increasingly clear, but so did my true desire for my married life.

Eldridge said, “Emasculation happens in marriage . . . Women are often attracted to the wilder side of a man, but once they have caught him they settle down to the task of domesticating him. Ironically, if he gives in he’ll resent her for it and she in turn will wonder where the passion has gone.”

Those words sickened me because they described me perfectly. I wanted Corey to go to work every morning, come home in time for supper, wrestle with the boys a bit, and relax before bed. Then I wanted him to wake up the next day and do it all over. Tame and predictable.

That’s what I thought I wanted. But it’s not what I really want. And it’s not what Corey needs. He enjoys his job. He adores me. And he is a family man. But tameness and docility are not a part of his nature.

Corey doesn’t just enjoy adventure. He needs adventure. It’s the fuel that fills his tank to do everyday life.

Falling Back in Love with the Adventure

That adventurous spirit is what I fell in love with. The first afternoon we ever spent together included hiking up a bluff and picnicking on the ground. The experience was complete with mosquitoes, sweat, dirt, and wildlife. The first evening we spent together involved a mud fight with friends on a construction site. (We may or may not have been trespassing.)

That is the man I couldn’t get out of my 20-year-old mind. But now since that 30-year-old me had him securely in my clutches, I was working hard to stifle the very things I fell in love with.

Faced with my sinfulness, I not only had a renewed desire to change because I knew it was right, but amazingly, I started to love Corey’s rugged adventurous side all over again.

The Benefits of Doing the Right Thing

We’ve been married for 16 years now, and it’s been almost a decade since I first grasped how my husband ticks and how unpleasant I can be in reaction to the parts of him I don’t understand.

I almost hate to admit this, but I still struggle to do the right thing. During each trip, I fight the tendency to feel sorry for myself. Every single time.

In practice, the only way for me to successfully combat my wrong attitude was to capture each bitter thought I had toward Corey, evaluate it, and let it go.

But when my right attitude wins out over my selfish one, I am just as blessed by the trip as Corey.

When he smiles and drops his pack in the front entryway, I can clearly see a contented and refreshed, albeit stinky and unshaven, husband. A few days in the wilderness for him can wipe away a month of stress at work. And a few days away from the boys and me recharges his love for us and his desire to be with us. Some of our best family times happen in the days following his trips. That wasn’t the case during those early years when my bitterness and self-pity got in the way.

As our boys have grown older, another benefit has emerged. Some of his “man-trips” now include our sons. Corey takes our boys on an annual weekend canoe trip. Just a couple dads, a few boys, and some canoes. They play in the river, pee in the trees, and sleep on sandbars. And they come home with sand in their ears, stories of cliff-jumping and a deepened father-son relationship. That, my friends, may be the most incredible gift I have received from sacrificing a few days here and there to my man’s trips; boys who are in “man-training” under the care and direction of the most adventurous and loving man I know.

When I do put his interests above my own desires, I am always challenged, but I am equally blessed.

Kim Harms is a freelance writer living in Huxley, Iowa, with her adventure-loving husband, Corey, and their three growing boys. In addition to writing, she runs a ministry called 500 Dresses that sends dresses, shorts, and sewing supplies to the needy around the world. Kim can be found online at KimHarms.net or on Twitter at @kimharmsboymom.