Are you married to a man-child?
By Dr. Juli Slattery 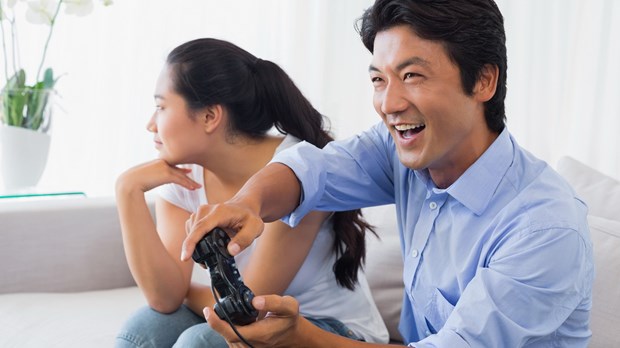 He may be over six feet tall and intimidating to a stranger, but he still behaves like he’s 15. He spends hours a day playing the PS4, can’t make a decision, and throws a temper tantrum when he doesn’t get his way. Does this describe your husband? If so, you’re not alone.

It seems to be more common than not that a young wife finds herself married to a man who resembles an adolescent. There are a lot of reasons why this is a growing trend, so perhaps we will save that analysis for another day and another article. Regardless of how you got there, the question is: What do you do when your husband won’t grow up?

For many women, this represents a pivotal crisis in marriage. The right response will lay the groundwork for healthy intimacy while the wrong response can propel the relationship into a tailspin.

Addressing this problem in your marriage begins by acknowledging that your husband isn’t the only one who needs to grow up. Yes, you can point to a hundred ways you may be more responsible and mature than he is. While your frustration may be justified, it also probably points to your own immaturity. I know because I’ve been there.

Addressing this problem in your marriage begins by acknowledging that your husband isn’t the only one who needs to grow up.

When my husband and I got married, I appeared on the surface to be more mature than he was. I was goal-oriented, knew what I wanted from life, and had been a Christian far longer than my husband. As much as I loved Mike’s laid-back approach to life when we were dating, I fumed about it once we were married. In my internal dialogue, I complained about always having to be the serious one, the responsible one. I remember one incident that represented the early years of our marriage.

Mike and I lived in a two-story townhouse. We agreed we would clean the house together on Saturdays—he would clean the upstairs and I would clean the downstairs. Along came Saturday. After breakfast, I grabbed the cleaning supplies and tackled my part of the house. Mike turned on the TV. Long after I had finished my part of the house, Mike decided to go for a run . . . then lunch . . . then a nap. As the hours wore on, I seethed with anger. By about 9 p.m., I self-righteously grabbed the cleaning supplies and began working on the upstairs. I’m sure I sighed loudly and slammed cupboards, letting my new husband know what a martyr he had married. I was so mad at my husband that I slept on the couch that night. I really lost it when Mike came downstairs the next morning, chuckling at me sprawled on the couch. “Well, I got a good night’s sleep!” he informed me.

In the following days and weeks, Mike and I hashed out this ongoing issue so perfectly displayed by the cleaning episode. I learned my husband wasn’t the only one who needed to grow up—I could be controlling and manipulative in my high standards, sparking my husband to respond with passive-aggressive stubbornness.

Truth be told, we all have a bratty, selfish, sinful kid inside of us. We may be more sophisticated in how we demand our way, but sin is ugly no matter how it is expressed. I’m not suggesting you shouldn’t be upset if your husband refuses to get a job or take responsibility. What I am saying is that a self-righteous approach is doomed to make the problem worse.

You are the one person who ultimately can invite your husband into the challenges of authentic relationship and adult life.

Yes, it’s the age-old “take the log out of your own eye.” You married a man who still has some “boy” in him. And he married a woman who can still be very much a little “girl.” I just turned 45. No matter what the wrinkles around my eyes tell you, I still have pockets of immaturity and selfishness that remind me of my need for grace—God’s and my husband’s. “God opposes the proud, but gives grace to the humble” (James 4:6).

Why does watching ESPN for hours on end appeal to a man? What in the world does he get from playing video games? Why can’t you get him to engage with you in real life, real relationships, and real work?

I may be overgeneralizing here, but I believe the bottom line is fear. Do you know your husband fears failure?

I remember a story my dad once told me. He was 12 years old and had just moved to Brooklyn, Ohio. Although money was tight, his parents sacrificed to buy him a baseball glove so he could play in the neighborhood baseball league and make some friends. He soon found himself playing in the outfield for the city championship. His mom and dad came to the game to cheer his team on under the lights of a city stadium. My dad’s team was ahead by one run in the ninth inning—all they had to do was close it out. My dad will never forget the humiliation of dropping a routine fly ball, giving the other team the winning run. Since those were the days before James Dobson, his parents didn’t hug him or say a word. He was left alone with his failure.

I believe every man has a 12-year-old boy within him that fears what my dad experienced. Self-doubt and fear of failure taunt the average young man, even as visions of being a “hero” bring hope.

Video games and fantasy football offer “safe” ways to be a victorious hero. The virtual world offers risk-free adventure and achievement. The problem is the virtual world isn’t reality. The accomplishments are an illusion. In the real world, your husband can still be rejected, humiliated, and exposed as a failure. His virtual success does nothing to equip him in relationships, work, and leadership. To make matters worse, many young men do not have fathers or mentors to teach them and model manhood.

Nurturing the Boy While Building the Man

Dr. Daniel Levinson wrote a classic book in 1986 called Seasons of a Man’s Life. His conclusion was that every man needs three things to be fulfilled in life: a dream, a wife who believes in him, and a mentor to show him the way. Dr. Levinson’s conclusions are still true of men today.

Even more than the fear of “dropping the ball,” your husband fears failing you.

My friend, I know you may be frustrated by your husband’s lack of maturity at times, but it is key for you to understand that you are one of the most important factors in whether or not he grows up. You are the one person who ultimately can invite your husband into the challenges of authentic relationship and adult life. Even more than the fear of “dropping the ball,” your husband fears failing you.

As his wife, you have the delicate role of protecting your husband’s vulnerabilities while also calling forth his strength. This sounds complicated, but it is accomplished day by day, moment by moment, in how you choose to think about him, pray for him, and respond to him.

The wonderful news is you aren’t the first woman to walk through the challenges of how to bring out the “man” in your man. I’ve seen it done by wise women, and I’m learning the art of doing so in my own marriage. I’ve learned when to step back, when to encourage, and when to confront.

I love the man my husband is becoming. It makes me chuckle to think back on the frustrations and fights we had 20 years ago. I don’t regret for a moment the hard work of seeking God’s wisdom, laying down my pride, and building into this husband who seems to love me more every day.