Believe it or not, conflict is necessary for healthy relationships.
Ann Swindell 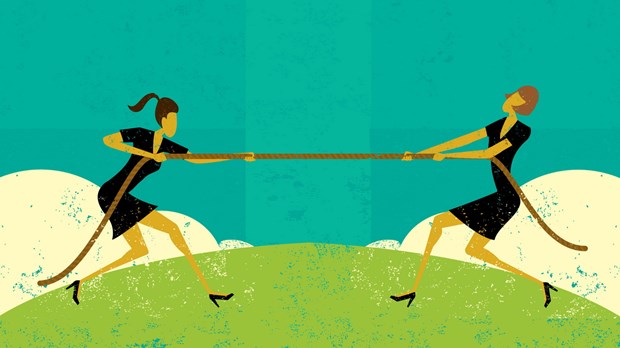 I was out of town when I received a voice message from my friend Gwen. I’d been at a conference all day and couldn’t be reached, so I sat in the hallway and listened to her words. She was hurt, she mentioned, by something I’d said earlier in the week, and she wanted to know my intentions behind it. Had she misunderstood me?

I dislike conflict—especially conflict with people I love. Three or four years ago, words like this from a friend could have sent me into a tailspin. I would have felt anxious and unsure about our relationship, questioning her love for me and our friendship’s footing.

I connected with Gwen, explained my intentions, and repented for where I had sinned. She was more than gracious. She was loving, and she forgave me. And I wasn’t worried about where we stood; I knew our friendship was solid.

For someone who used to avoid any form of argument as much as possible, I felt oddly buoyed by the realization that I was, in fact, getting better at this conflict thing.

The Grace of a Fighting Friend

Gwen is nothing if not honest. When we became friends, it quickly became apparent to me that she never shied away from conflict.

When our friendship grew closer, I learned she also wasn’t afraid of a fight. In fact, she welcomed it. She was never bullheaded or self-righteous, but if there was something between us that didn’t feel healthy to her, she brought it up. I initially had a difficult time reconciling Gwen’s welcoming attitude toward conflict with friendship. The two seemed to be at odds.

But Gwen’s friendship has been a grace in my life. I’ve learned that conflict, handled well, leads to intimacy. And the inverse is also true; intimacy can’t exist honestly without conflict.

What Holds Us Back from Conflict

I wish conflict didn’t exist. My preference is that relationships could roll along without any fights, arguments, or disagreements. But if we get up every morning and actually interact with other humans, we know that conflict—or at least the possibility for conflict—is everywhere.

So what holds us back from diving into arguments, starting disagreements, or engaging in a fight? Why do we shy away from conflict?

If you’re anything like me, fear is often the largest driver that keeps you recoiling from intentional conflict with others, especially with others you love. I’m afraid that if I finally start that difficult conversation—or if I actually push back when I hear my friend say something I disagree with—that friendship might dissolve. I am often afraid that conflict will break a friendship, not strengthen it.

Fear is often the largest driver that keeps you recoiling from intentional conflict with others, especially with others you love.

A lack of having healthy conflict models in our lives often holds many of us back from being willing to step into a fight. If we grew up in a household that didn’t model redemptive conflict, we may not feel like we have the right tools to know how to fight well. Instead, when conflict comes, we may lash out or retreat. We don’t like what we see in ourselves when fights occur—so the thought of initiating conflict with those we love feels scary and destructive.

Fighting with those we love is unavoidable. It may be overt, passive-aggressive, or even suppressed. We don’t all think the same thoughts and hold the exact same opinions, and that’s good. But when we stop working through differences (or don’t ever start working through them in the first place), our relationships stagnate. Friendships that don’t include any real conflict probably aren’t growing.

But it’s painful to fight with a friend, a spouse, or a family member, even if we know that conflict will ultimately bring growth. Like a knight with a weak point in his armor, conflict points out the aspects of a relationship that are insecure, unsure, or hurting. And those pain points are never easy to address. But if we don’t work through them, we can become bitter or resentful in our friendships. It becomes more and more difficult for us to trust and engage with these people. Friendships stagnate. Relationships that once were vibrant start to fade.

It’s important for us to see conflict as God sees conflict. To God, conflict is not something to be avoided; it’s inevitable. It happens because we are sinners. The Bible tells us selfishness and sin are at the root of most of our arguments. The apostle James writes to his readers:

What is causing the quarrels and fights among you? Don’t they come from the evil desires at war within you? You want what you don’t have, so you scheme and kill to get it. You are jealous of what others have, but you can’t get it, so you fight and wage war to take it away from them. Yet you don’t have what you want because you don’t ask God for it. And even when you ask, you don’t get it because your motives are all wrong—you want only what will give you pleasure. (James 4:1–3)

Ultimately, we have conflict in our relationships because we’re broken, and we usually have ourselves and our needs at the center of our lives. Fights, then, are not a question of if in a friendship, but when.

Fights, then, are not a question of if in a friendship, but when.

When conflict arises, Jesus tells his disciples that being sinned against is not something that should turn us away from relationship; it’s an opportunity to forgive. “If another believer sins,” he says, “rebuke that person; then if there is repentance, forgive. Even if that person wrongs you seven times a day and each time turns again and asks forgiveness, you must forgive” (Luke 17:3–4).

Perhaps the response of the apostles is not unlike our own: “The apostles said to the Lord, ‘Show us how to increase our faith’” (Luke 17:5). They were astonished at Jesus’ command, because to continually forgive—and to continually repent—are both difficult things to do. But repenting for the ways we have hurt our friends (intentionally and unintentionally) cultivates humility in us. Forgiving others births Christlikeness in us. Both aspects—repentance and forgiveness—bring necessary growth in our lives, and both should be a normal part of healthy conflict.

And there is the key phrase—healthy conflict. How we handle the conflict in our friendships is what makes all the difference. Jesus tells us in Matthew 18:15 that we cannot ignore hurts and sin in a relationship: “If another believer sins against you, go privately and point out the offense. If the other person listens and confesses it, you have won that person back.” We are called to address the brokenness between us.

Do you need to have loving conflict with a friend? If so, here are some tools for fighting well in friendships:

1. Pray beforehand. Ask God to give you his perspective on the situation and his heart for your friend. Ask God to help you see her as he sees her.

2. Believe the best about the other person. Just as we don’t want others assuming the worst about us, give your friend the benefit of the doubt. Assume that she didn’t mean to hurt you.

3. Own your feelings. Our emotions belong to us, and we shouldn’t push them on anyone else. If you feel mad or angry, don’t try to make your friend feel your anger. Speak the truth in love, but don’t place blame for emotions.

4. Intentionally choose a good time and place for the conflict. It might be wise to avoid public places or times late at night when you’re already tired.

5. Repent when you need to. None of us are blameless. Acknowledge your own sin in the situation or relationship—and don’t try to sugarcoat it.

6. Forgive your friend. We have been forgiven much by Jesus, and so we must forgive others (Matthew 6:15).

7. Press back into the relationship. After a difficult conversation or fight it may feel awkward or scary, but take the first step back into intimacy with that person.

The Growth that Conflict Brings

Gwen’s friendship has taught me that conflict, handled well, leads to intimacy. Just as our awareness of the depth of God’s forgiveness of our sin can—and should—lead us into greater thankfulness and love for him, the forgiveness that we can give and receive from a friend can lead us into greater thankfulness and love for her. When a relationship continues, not in spite of arguments but because those arguments have been worked through, a sense of stability and trust is birthed. And trust and stability usher in greater levels of transparency and honesty in friendship—something all of us want with those we call our friends.

Ann Swindell is a TCW regular contributor. She spends her weekdays as a college instructor of writing, her weekends as a pastor’s wife, and every day of the week as a wife, mom, and coffee drinker. Connect with her at AnnSwindell.com, on Facebook, or on Twitter at @annswindell.