Parenting is part of my calling, but it isn’t my only calling.
Diane Paddison 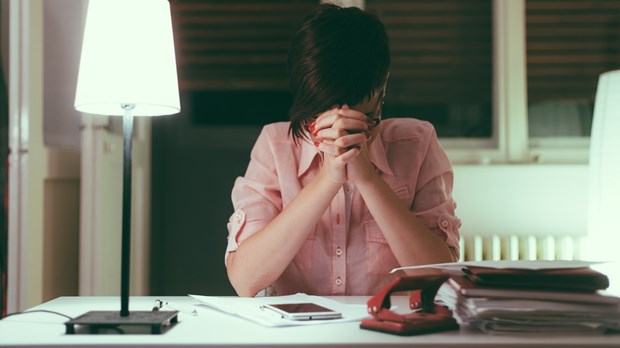 Sometimes when I speak with working moms, I’m surprised by a certain disconnect between the way they think about the callings of work and motherhood. I’m thinking particularly of some strong, confident women I know who feel genuinely called to use their God-given gifts in the marketplace but who are nevertheless overwhelmed by worry and guilt over whether they’re doing enough for their children.

What I want to say to these women is this: “Why are you trusting God with your career but not your parenting?” If God has called you to work, isn’t it possible that he has called your kids to have a working mom? I think it’s time we looked closely at this thing we call “mom guilt.”

A certain amount of healthy guilt has its place in our lives. We’ve all felt the pinch of discomfort that motivates us to right a wrong, apologize to someone, or avoid certain situations in the future. But that feeling is not the same with mom guilt. There is no one right way to be a mom—no biblical prescription for the amount of time you spend with your kids or the number of soccer games you attend. This kind of guilt isn’t a corrective response to some objective wrongdoing. It’s imposed on us by a culture filled with impossible standards—and rather than opening our eyes to truth, mom guilt fills our hearts with lies.

Under strain, it’s tempting to focus on circumstances for a cure: If only I could cut back on my hours, we tell ourselves, or If only the company would give me more flexibility, or If society would just relax already about this “perfect mom” thing, we sigh—then things would be better. It’s true that there are actions that employers and the culture at large could do to relieve some of the external pressures placed on women and families. But external relief alone cannot cure this type of guilt because mom guilt is not an external problem—it’s a heart problem.

If the lies of mom guilt have a hold on you, it doesn’t matter how much or how little you’re working. Just ask the hundreds of thousands of stay-at-home moms who operate small side businesses, take on a few hours of contract work, or earn money blogging. These women are suffering from guilt too, and it’s not because they lack flexibility. We live in a world that will always send conflicting and confusing messages about motherhood.

But while we can’t necessarily control the number of hours we work or how flexible our schedules are, we can address the amount of power we let this guilt have over our lives and hearts. And we must. After all, where is all this guilt getting us? Nowhere. Excessive guilt increases stress, negatively impacts health and well-being, inhibits our ability to connect with God and others, and can even make us worse at our jobs. We need to combat this guilt with God’s truth.

Do you replay your mothering mistakes in your head? Like that time you were late to pick the kids up or missed their recital, or those times you lost your temper or said something hurtful? Mom guilt clings to those mistakes and builds an identity out of them: Those mistakes are you, it whispers in your heart. You are that kind of mom. But that’s not true—not even a little bit.

If anyone could have believed his mistakes defined him, it would have been Paul. Having spent years persecuting God’s people, Paul described himself as the very worst of sinners. But Paul understood that, through Christ, mistakes had lost their power to define him. Christ’s sacrifice offered Paul a new identity. He was still imperfect but looked toward greater hope: “Forgetting the past and looking forward to what lies ahead, I press on to reach the end of the race and receive the heavenly prize for which God, through Christ Jesus, is calling us.” (Philippians 3:13–14). Why does Paul do so? “I press on to possess that perfection for which Christ Jesus first possessed me” (verse 12, NIV).

Like Paul, we must learn to let go of our mistakes, to forget what lies behind, and strain forward toward the good of God’s perfect plan.

3. Guilt says, "Your weakness is shameful.” God says, “I build strength from weakness.”

Children are a huge responsibility, but I believe that part of the reason God gives us the gift (and challenge) of parenthood is to remind us just how limited our own strength and control really are. We live in a world that hates weakness and seeks to hide it, but God looks on our weakness and sees opportunity: “My grace is sufficient for you, for my power is made perfect in weakness” (2 Corinthians 12:9, NIV). In our weakness and our need, we are drawn closer to God and made whole by his perfection.

The Myth of the Perfect Mom

Researchers at Harvard Business School recently published a study that found that children can benefit in certain ways from having a mom who works outside the home. The study correlated growing up with a working mother to generally higher levels of professional accomplishment. It also found that men raised by working mothers are more inclined to help with household chores and child care. Not surprisingly, this study almost instantly became fodder for “mommy war” attacks and justifications. I like the results from the study but not because I think they prove that one way of mothering is better than another. I like the study because it shows that God can work good in every situation—and I’ve seen this firsthand in my own work experience.

When my kids were young, my work demanded a fair amount of travel. Even though I managed to limit time away to no more than one night per week, I bought into feelings of mom guilt whenever I left. Later on, I took a job that required weeks at a time of international travel. Even though my kids were much older by then, I still hated leaving, especially for such a long time. But looking back, I can see how traveling actually helped me have refreshing breaks from the usual home chores. My kids tell me that it also helped them understand that the world didn’t just revolve around them. We had conversations about what I did at work and why I felt that God called me to do it, and my kids gained a sense of independence and self-reliance.

The reality is that God wants us to use all of our gifts to the best of our ability. Parenting is part of my calling, but it isn’t my only calling.

Although it doesn’t always feel like it, our kids are under our care for what is really a relatively short amount of time. Twenty years go by very quickly. Most people typically have about 60 years of adulthood, which leaves 40 years without children at home. It is important to build a full life, and that means not only serving your children and family but serving God and others by using your gifts and passions. Mom guilt narrows our perspective and saps our strength. Women are spending precious energy, time, and worry on these lies, and it’s time to let them go and start living with truth instead.