What does God desire in my weakest moments?
Sherry Surratt 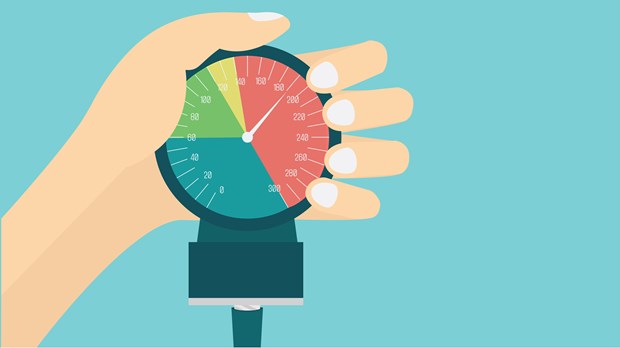 Everybody faces them—the deadlines, the bills, the expectations, the responsibilities. It can feel like your head might explode from all the stress. Having just returned from a frantic trip to Miami, Florida where my daughter had to be suddenly hospitalized for food poisoning (from a chicken quesadilla), I’ve been contemplating my own response to pressure. My daughter was desperately sick, possibly septic, alone in a big city except for the friend who was traveling with her (who coincidentally had eaten a quesadilla too). I had to get to her quick, but I couldn’t find a flight that would get me there as fast as I needed. After selecting the best choice, the weather decided to throw us a curve, and my already-not-fast-enough-flight got delayed three hours. I paced. I fumed. I worried. I developed a headache.

Have you ever found yourself in a situation where you felt trapped and helpless, not sure what to do next? In Daniel 2, I read the story of a guy who knew exactly what this felt like. Pressured by the king’s demands to have his dream explained to him, Daniel not only needed to be wise but he also had to please a crazy man who had already put to death the other men who’d failed him. Talk about a tough situation!

I’ve thought a lot about Daniel and his situation. How was he able to keep his head when others around him were literally losing theirs? As I read the account in Scripture, a few things about Daniel stand out to me.

Even when the pressure got really fierce, Daniel remained calm. The Bible tells us at the moment when the commander of the king’s guard headed out to put to death the other wise men of Babylon, “Daniel spoke to him with wisdom and discretion” (2:14). He didn’t run furiously to the king and demand a reprieve, and he didn’t throw a fit at the commander’s feet. Daniel knew that he could be the next one put to death, and he faced the danger head-on with reason and calm words: “Why has the king issued such a harsh decree?” (verse 15).

Daniel’s response made me think about my own. When my flight delay was announced, I’d sighed and griped to my fellow passengers in the waiting area (who, by the way, were experiencing the same delay I was). I was none too sweet to the person behind the counter with my words, “Isn’t there anything you can do to help me?” My attitude was demanding. My voice was tense. I wasn’t in control, and I didn’t like it.

Daniel Trusted God with His Problem

Daniel didn’t just sit and fume—he took action. Daniel 2:16 tells us he went immediately to the king and requested more time to interpret his dream. After he took time to pray, he then went back and spoke boldly: “There are no wise men, enchanters, magicians, or fortune-tellers who can reveal the king’s secret. But there is a God in heaven who reveals secrets, and he has shown King Nebuchadnezzar what will happen in the future. Now I will tell you your dream and the visions you saw as you lay on your bed” (2:27–28, emphasis added).

I love the statement “but there is a God.” Daniel acknowledged right from the start that his dream interpretation wasn’t coming from his own wisdom. He trusted in a big God, and he declared his trust loudly. There are so many situations in life when we are powerless. We can’t control the weather. We can’t control our children. We can’t make the doctor give us a good report. We can’t turn our financial situation around in time. We can’t heal or fix or save. We can’t, but we know a God who can.

As I think now about my daughter laying in the hospital bed, what power did I have to heal her? Of course I wanted to be there with her and help her navigate the situation. I wanted to hold her hand. But there was nothing I could do to make her body get rid of the infection any faster. Much of my angst was wrapped up in my sense of urgency to get by her side. Me, the almighty mom. Just by walking in the door, all would be well . . . right? The reality was that the God who could do these things was already there.

Daniel Leaned into His Circle

Before Daniel went back to the king with the interpretation, he slowed down long enough to call on his friends for help. Scripture tells us, “Then Daniel went home and told his friends Hananiah, Mishael, and Azariah what had happened. He urged them to ask the God of heaven to show them his mercy by telling them the secret, so they would not be executed along with the other wise men of Babylon” (2:17–18).

I bet you know, just like I do, that God created us with a need for each other. He gave us our friends and mentors, those dear ones who know how to pray, so we can text them right at the intersection of I-don’t-know-what-to-do and I’m-about-to-lose-it. I know this like I know my own name, but in the moment, panic causes me to forget what I know. Luckily my husband didn’t. He immediately reached out to our small group who were already texting me before I had reached my daughter. We are praying for Brittainy. We are asking God to lead the doctors to just the right treatment and to bring people to surround her until you get there.

Now that I’m back home and reflecting on the situation, I can read Daniel’s story with new perspective. We certainly faced some scary moments, but Brittany and her friend both fully recovered from their horrible bout of food poisoning with no long term-effects (other than looking very closely at any dish that contains chicken).

That scary, pressure-filled experience is causing me to ponder some things. Am I allowing what I truly believe to permeate not only my actions but also my responses, even during the moments when panic calls my name?

Here’s what I know for sure: Facing pressure isn’t easy, and it’s hardly ever fun. But there are people who have gone before me who can show me the way, and there is surely a God in heaven who has control in those moments when I don’t. I can trust him.