Christ turns our assumptions upside down and inside out.
Andy Crouch 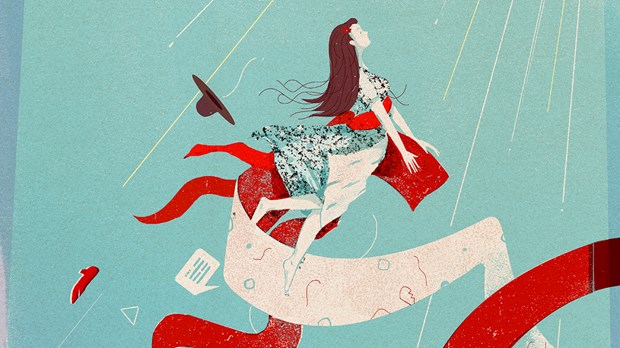 We get just one glimpse of Jesus as a boy: the time when he deserted the family entourage at age 12 in order to settle down in the temple (Luke 2:41–52). After three days of frantic searching, Mary rebuked her child with words any mother could say to a child today: “Child, why have you treated us like this? Look, your father and I have been searching for you in great anxiety” (NRSV).

Jesus posed a question in return. “Why were you searching for me?” he asked his mother in words any 12-year-old boy might say, still innocent of the vulnerability and anxiety of parenthood. And then words not any 12-year-old might say: “Did you not know that I must be in my Father’s house?”

Later on in Luke’s Gospel (Luke 10:38–42), we again see an imperturbably seated Jesus and an extremely agitated family member. His host Martha confronted Jesus and, indirectly, her sister, Mary, who was sitting with him just as the temple scribes did: “Lord, do you not care that my sister has left me to do all the work by myself? Tell her then to help me!”

“Martha, Martha,” Jesus replied—Is this a sign of affection, or does it take two repetitions of her name to break through her anxiety?—“you are worried and distracted by many things; there is need of only one thing.”

We can readily see ourselves in these troubled people—in Jesus’ worried parents and his busy, anxious friend Martha. But the great value of these stories to us is that they help us see Jesus better, and they help us begin to see the world the way he sees it. The Christian life is one long story of disorientation and reorientation, being patiently led by Jesus away from the things we are anxious about and toward the things that matter to him.

This painful disorientation ultimately touches on the things we think we most value—life, honor, power. To follow Jesus is to have our assumptions about all these things turned upside down and to have our hopes for them disappointed—and yet to find that the life he offers is far better than we could have guessed.

To put it another way: Being a disciple of Jesus means losing everything you thought you wanted and gaining more than you ever thought you could have.

Or to put it one more way: Being a disciple of Jesus means taking off our bubble wrap.

To understand that, we must visit with Jesus three more times in the company of more anxious families.

There’s another time we see Mary and Martha together, in the Gospel of John (chapter 11). They sent an urgent message to Jesus about their brother, Lazarus: “Lord, he whom you love is ill.” Delivering such a message would entail a fair amount of travel and searching. And yet, when the message reached him, Jesus stayed put. When he finally arrived, four days after Lazarus’s death, Martha offered a barely veiled reproach, not so different in tone perhaps from Jesus’ mother years before: “Lord, if you had been here, my brother would not have died.”

No matter how urgent your situation, no matter how anxious your search and seemingly great your need, it is quite difficult to get Jesus to budge.

No one discovered this more viscerally than a man named Jairus, one of the leaders of the synagogue. We meet him in Mark 5 at the moment when he fell at Jesus’ feet and begged him—“repeatedly,” Mark says: “My little daughter is at the point of death. Come and lay your hands on her, so that she may be made well, and live.”

For once, Jesus budged. He followed Jairus, a crowd pressing around them as they went.

But in the crowd there was a woman. She had been bleeding for 12 years, and her condition was as chronic as Jairus’s daughter’s was acute. And her approach to Jesus was as indirect as Jairus’s was overt. She threaded her way through the crowd, believing there was no need for a glance or a word, let alone a visit to her home—just the briefest brush with Jesus’ robe.

Whatever we make of this bit of sympathetic magic, the woman was right. The moment she touched Jesus’ robe, she knew she was healed. She began to slip away.

“Who touched my clothes?” he asked.

Now Jesus was the one on a relentless quest.

If you can’t get Jesus to budge when he doesn’t want to, you certainly can’t hide when he wants to find you. The woman came forward, trembling. She fell at Jesus’ feet, where Jairus had been a few minutes earlier, and told him “the whole truth.”

The whole truth of enduring much under many physicians, of spending a life’s savings on health care all the while getting no better but only worse—this whole truth was not told quickly.

Jesus wanted to hear it all. And so, in the presence of the crowd and Jairus, he listened to all the humiliating details of a 12-year medical history. And then he said, “Daughter.”

Well, he said more than that, of course. He pronounced her healed. But that first word is the most remarkable. “Daughter of Abraham” was the conventional phrase, but Jesus—who even at 12 years old called God “Father”—signaled this woman’s membership in an even more extraordinary family. Her faith had not just made her well; she had not just been healed and heard; she had been adopted.

You may know the rest of the story—Jairus’s ashen-faced servants arriving to tell him his own daughter is dead; Jesus’ sudden, more determined resumption of his journey to Jairus’s home; his improbable claim that the girl is just sleeping, prompting general grim hilarity; his secretly taking her cold hand in his, saying, “Little girl, get up”; and the 12-year-old girl suddenly waking, rising, walking; the disciples and parents bound to secrecy.

First He Strips Away Our Security

These stories help us begin the real process of conversion—turning our assumptions about the world, and our place in it, upside down and inside out.

Jesus confounds our assumptions about privilege and exclusion. In a thousand ways, we learned early on that some daughters are more equal than others—that some people have the status, popularity, and position from which others are excluded. Indeed, the very basis of such things is that some are included and others are excluded.

Jesus confounds our desires, so dramatically escalated in this modern technological world, for control and comfort. There’s a saying my wife and I have repeated over and over to help our children navigate the suburban affluence in which they have been brought up at such peril to their souls. We use it to remind them that money can buy insulation from the dangers of life but also from life’s true joys. We tell them, “The only thing money can really buy is bubble wrap.”

Following Jesus will strip you of your bubble wrap, your insulation from anxiety and pain. Jesus has a terrifyingly high tolerance for discomfort, even or especially among those he calls his friends.

Following Jesus strips you of your bubble wrap in another way as well. It strips you of the insulation that prevents you from knowing true life—from the busyness, worry, and self-importance that keep you from having the one true thing that really matters, from everything that prevents you from hearing and telling the whole truth, from all that might keep you from seeing, in the end, the resurrection power of God.

Then He Confers His Authority

Jesus confounds our expectations about authority. We think of authority as vested in people with particular kinds of position and roles—we think, frankly, of power as invested in men. But title and role mean nothing to Jesus, and women and men have equal access to him—equal ability to command his attention and equal inability to command him to do what they want.

The woman Jesus called “daughter” was highly vulnerable in her society, but she acted with almost as much authority and confidence as Jairus, making her way, like him, through the crowd and ending up, like him, at Jesus’ feet. Then she was given far more authority than she ever imagined or feared: the authority to tell Jesus, and everyone listening, “the whole truth”—something Jairus was specifically told, once his own daughter was raised from the dead, not to do. Mary the sister of Martha, too, spent time at Jesus’ feet—and a long Christian tradition says she, as well as her sister and other women, was one of the women at the empty tomb, commissioned with them to become the first heralds of the Resurrection. Follow Jesus—or to put it more precisely in the context of this daughter’s story, pursue Jesus—and you will be granted more authority than you ever dreamed.

Jesus confounds our expectations about vulnerability. Falling at Jesus’ feet, begging him repeatedly to heal his daughter, Jairus, the synagogue leader, was probably more vulnerable than he had ever been in his life. We think of vulnerability as characterizing people who inherit legacies of exclusion and who live on the margins. We think, frankly, of vulnerability as characteristic of women, the “weaker” sex. But before Jesus, women and men, the powerless and the powerful, are equally vulnerable. As Jairus followed Jesus—as Jesus stopped, searched, and refused to budge—Jairus’s worst fears of vulnerability came true. His daughter died as he waited. The healing procession became a funeral procession (until, eventually, Jesus demonstrated miraculous power once again). Follow Jesus, and you will be called to more vulnerability than you ever imagined.

The Real Jesus Is More than We Imagine

Ultimately, Jesus confounds our expectations about—well, about Jesus himself: “Child, why have you treated us like this?” “Teacher, do you not care?” “Lord, if you had been here. . . .”

If you call Jesus your friend and brother, expect to spend a lot of time complaining to him that he isn’t moving.

He doesn’t come when we call.

But in the end, he also listens more intently than anyone has ever listened to us.

And then he speaks.

“Daughter, your faith has made you well.”

“Behold, I make all things new.”

Andy Crouch is executive editor of Christianity Today. His latest book is Strong and Weak: Embracing a Life of Love, Risk and True Flourishing.