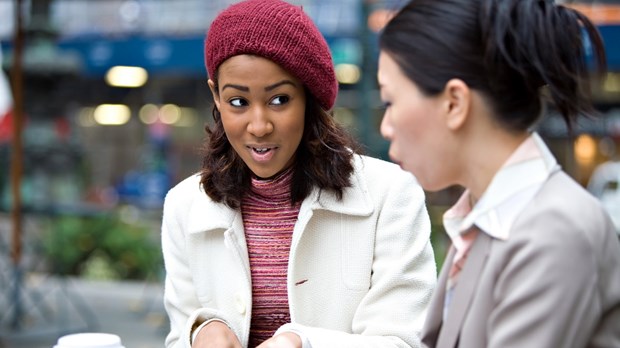 Some years ago, while on a short-term mission trip to China, I became the source of much amusement. During a visit to a McDonald's in Canton, a group of Chinese stopped to stare at me, chattering away in their native tongue while calling their friends over to take a closer look. They weren't rude, just curious. It was probably the first time they'd ever seen an African-American, so I wasn't offended.

Four years later, back in America, I had the same experience—and it's continued to this day. Because it's so rare for African-Americans and Chinese to be friends, people stare whenever my Chinese friend, Minli, and I are together. But we simply ignore the stares because we know God brought us together.

Minli and I first met at the University of Kansas. She came from Beijing, China, and I from Kansas City, Kansas. Neither of us was aware of the other. I moved into "Sunflower House," a student cooperative, and Minli lived with her mother. The following spring, when Minli's mother relocated for a job, Minli moved into Sunflower House.

The first time I saw Minli, I asked her to lunch. Even though we were total strangers, she accepted. Over a meal we shared about our lives, and I told her about my trip to China. Afterwards, we often ran into each other and chatted in the house.

One Friday night, I spotted Minli on my way out to a Bible study, and she asked me where I was going. When I told her, she said she wanted to know more about God. I decided to skip the study and invited her to my room instead so we could talk.

Once in my room, I told her about my faith in Christ. I dug out a Chinese Bible I'd saved as a souvenir from my missions trip and gave it to her. She was amazed I had one—and I was amazed at God's purpose for my saving one!

After that conversation, Minli and I hit it off. We cooked, ate, and talked together. She prepared genuine Chinese meals such as Szechwan Beef and my favorite, Jiaozi Dumplings. I introduced her to sweet potato pie, and her favorites, greens and corn bread. Did our different cultures hinder our relationship? Not at all—they enhanced it!

I never felt led to push Minli into accepting Christ, but soon after we met, I invited her to a retreat for international students sponsored by my church. The special speaker was a Chinese Christian who had a distinguished career as a chemical engineer and chancellor of a major Chinese university. God knew Minli was career-minded, so he allowed her to see she could be both successful and a Christian without compromising being a Chinese. Later, Minli also encountered another Chinese Christian, a successful female professor at Washington University, who exuded the gentleness and peace of a believer. These two events started Minli on the road to wanting what she saw in them and hadn't seen in other Chinese.

Several months later, Minli accepted Christ in the privacy of her room after reading her Bible. When she came over that evening to tell me of her decison, I prayed with her and encouraged her to confess openly that she believed in Jesus as her Lord and Savior.

With this, our relationship deepened. The Lord used me to help disciple her. Minli opened up about how women were treated in her native land and the opportunities they were denied because of their gender. As she told me about the subtle discrimination she faced as a minority in America, as an African-American female, I knew exactly where she was coming from. Minli also talked of the subtle racism she faced on campus because students and colleagues looked upon her as different because she was "Chinese."

As we prayed about these types of events together, Minli became not just my sister in Christ but my friend. I told her about the time I wanted to go to the Philippines to work with an indigenous ministry there, but the Caucasian missionaries told the Filipino pastor I shouldn't be allowed to come because I was "black." Then I told her about an incident on my missionary trip to China. When I shared my testimony in an evangelistic meeting, one of the Caucasian ministers made jokes about me "sliding backwards into the pulpit, dancing and twirling about as I shared," referring to the stereotype that black people use lots of theatrics when they preach. He later apologized.

But as I shared these experiences that had hurt me deeply, I also explained to Minli what I'd learned through them: how important it is to keep focused on God. These incidents—and others—could have turned me away from Christianity, but they didn't, because I'm learning to look to Jesus instead of others for my self-worth. Although Minli's faced a lot of pressure to reject Christianity from nonbelieving Chinese friends, she's always managed to bounce back. But it hasn't always been easy.

One of the things that helped us both in our university days was an international potluck/fellowship I hosted every Thursday night. It included Chinese, Korean, Malaysian, African, Filipino, and African-American student believers. We shared our food, faith, and culture.

Everyone seemed surprised at how an African-American woman could relate to these different cultures. At Minli's baptismal service, a Vietnamese Christian sister told me she was amazed at how the Asian students had bonded to me.

"Why should you be amazed?" I asked. "God's the creator of all cultures and races. If we're truly in Christ, we can relate to all cultures without exalting one over the other."

I truly believe God planned my friendship with Minli. He sent me to China to give me insight into her land, and even to save a Chinese Bible. He put in her heart a desire to know the God she couldn't freely explore in her homeland. He brought us both to the university in the same year and month to attend school. He placed me in Sunflower House and later brought her there. And he allowed Minli to become friends with an African-American woman who could relate to her situation, love her, and help lead her to the very best friend anyone can have—Jesus Christ.

God doesn't do things the way the world does. Too often we're programmed to think we can't be friends with people of other races or people we consider "different." But as my friendship with Minli—now going on six years—has proved, God can arrange a friendship between what the world considers an unlikely pair, and use our individual cultures, experiences, strengths, and weaknesses to forge a relationship that's mutually supportive and strengthening. Minli and I have grown together in a friendship that's always transcended culture to touch the heart. It's a friendship we know is ordained of God.

Janice Swinton is editor of Sistahs, a magazine for African-American Christian women. She and her husband, James, live in Kansas.