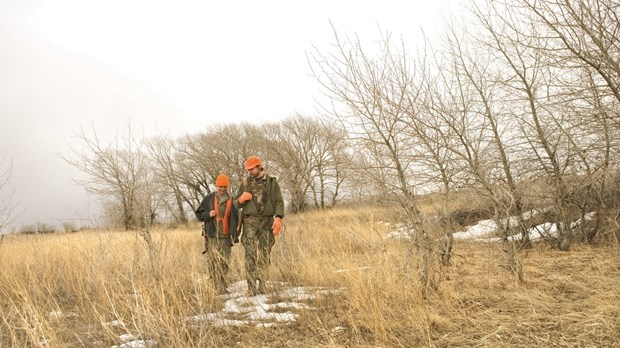 Two hours before our wedding, Steve, my husband-to-be, was frantically tearing through stacks of boxes in our new home, searching for hunting permit applications he had to turn in that day. "This is important!" Steve said to me over the phone. I was at the church, my wedding dress half over my head. As my mother held the phone to my ear through all the layers of lace and organza, I reminded him the photographer was taking pictures before the ceremony.

"I'll be there," he promised. "Just tell me where you put my box of hunting stuff!"

After that episode, it should have come as no surprise my beloved and I had different interpretations of the vows we exchanged that day. I took his promise to love only me to mean exactly that. Steve, however, thought the promise referred to forsaking other women—not hunting.

The Elk that Got Away

As a new wife, I was determined to share Steve's passion for hunting. So when he invited me to go elk hunting not long after our wedding, I was euphoric. I was sure whatever made him happy would make me happy. After loading our jeep, we drove for six hours, every mile taking us farther from civilization. He really wants to be alone with me! I thought happily.

Two hours later, my pleasure dimmed. We'd left pavement long ago and the road was growing less and less discernible. Finally Steve pulled the jeep into a small clearing and turned off the engine. "Come on! Let's set up the tent!" His voice rang with a happy anticipation I couldn't fathom. "Uh, oh!" he sang out cheerily as he unloaded our jeep. "I seem to have forgotten the tent poles! Oh well. We'll sleep under the jeep for tonight."

This can't be happening, I thought in despair. He seemed perfectly normal during the year we dated!

The next morning, I found myself utterly alone. The man who'd vowed to "cleave only unto me" was gone. I was attempting to tie the tent up between two trees when Steve came running out of the woods.

"Quick! I just spotted a huge herd of elk! You gotta see this!" He grabbed my hand and we raced off in pursuit. I'd never seen elk before and didn't know whether to be excited or fearful. I asked Steve to describe them but he shushed me to silence.

I took his promise to love only me to mean exactly that. Steve, however, thought the promise referred to forsaking other women—not hunting.

After a mile of hard uphill climbing, we came to a meadow. He motioned for me to stay put while he circled around to the other side. Too frightened to move, I stayed rooted to the exact spot where Steve left me. Suddenly, a noise on my left jerked me around. There, not twenty feet away, stood the most massive creature I'd ever seen outside a zoo. In horror, I realized this monstrous beast had to be an elk.

Not knowing what else to do, I screamed. The sound echoed back from the mountain with such force it sounded like there were a thousand of me.

Magically my protector appeared—screaming also—at me! I had scared away the trophy elk he'd been stalking. Steve didn't speak to me until we were back in camp, and then it was only to tell me he couldn't build a fire because he'd forgotten matches as well as the tent poles.

Twenty-one years later, I still love Steve, and he still loves me (despite the elk that got away). But while time has changed my definition of love to be more realistic, I've discovered that some truths about love remain constant:

Early in our marriage, I resented the lack of balance in how we spent our time together. If I compared all the time I'd spent hunting with Steve with the time he spent doing what I love, there'd be no contest.

Then in Philippians 2:5-8 I read: "Your attitude should be the kind that was shown us by Jesus Christ, who, though he was God, did not demand and cling to his rights as God, but laid aside his mighty power and glory … going so far as actually to die a criminal's death on a cross" (TLB).

After that, when resentful thoughts crept in, I gave them to God, praying, "Teach me to have your attitude, Father, which refuses to keep score or demand equality."

Our first night home from our honeymoon, Steve volunteered to help with the dishes. Immediately I began offering "constructive" criticism. "You put in way too much soap. You missed a spot. Your water needs to be hotter. . ."

Finally he looked at me and said quietly, "It seems easier for you to criticize me than to understand I've never done this before."

The people I love respond more readily to me when I try to see things from their perspective before I correct them.

Steve was right. Instead of being grateful for his willingness to help, I criticized his ineptness. It didn't make him eager to help with other chores.

Through the years, I've learned—sometimes the hard way—that the people I love respond more readily to me when I try to see things from their perspective before I correct them.

True Love Believes in Each Other.

Long before I had anything published, Steve believed in me as a writer. When my first article sold, he showed no surprise, only pleasure. "I knew you could do it!" he said.

His faith in me goes beyond mere words. Many times he's come home from work to find me glued to my computer and no savory smells coming from the kitchen. Not once has he made me feel guilty. "I have a great idea!" he'll say. "How about we go out for dinner?"

Last summer he needed a new welder for his well drilling business and decided to sell one of our vehicles to pay for it. Just when it sold, my computer ceased working. "Let's use the money for a new computer," he told me. "I can make do with my old welder awhile longer."

Steve's always seen possibilities in me I don't see. I feel his pride, and I strive to live up to it. His faith in me—his love for me—work together to help me achieve God's purpose for my life.

A friend of mine recently celebrated her fiftieth wedding anniversary. "If there's one thing I've learned about marriage, it's to never get so comfortable you cease to cultivate it," she told me.

"If there's one thing I've learned about marriage, it's to never get so comfortable you cease to cultivate it."

One Friday evening, Steve arranged for a sitter and told me to be home at precisely 6 p.m. I walked in to the flicker of candlelight, soft music, and a catered dinner for two.

Such an extravagant "coat of love" is rare. Usually it's something small and simple—the unexpected gift of a book by a favorite author, or a pizza-and-video night at home by ourselves. Sometimes it's nothing more than doing a chore we know the other one dreads.

True Love Hangs in There.

There have been times—particularly during hunting season!—when I've asked myself, Why did I take this man? Yet I know that without Steve, I'd miss the unique blessings that are the rewards of staying commited—even when you don't feel like "hanging in there."

When our sons were younger, time alone was rare. Now they're both nearly grown and Steve and I find ourselves alone more and more. Slowly but surely we're rediscovering leisurely dinners in quiet restaurants instead of the noisy chaos of fast food, and the pleasures of long evenings at home with no one to please but each other!

Time has a way of shrinking differences—and enlarging similarities.

Recently, Steve and I looked through our stack of photo albums. We laughed as we reminisced our way through an entire evening. As he eagerly turned the album pages, I thought, There's no other person in this entire world who would share the same pleasure in these memories as I do. My heart swelled with a new level of love for Steve.

Time has a way of shrinking differences—and enlarging similarities. And experience has a way of teaching us how to survive the differences that still exist. For instance, Steve is still as passionate about hunting as he was on our wedding day. I'll never derive the same pleasure he does from these outings, but I've learned at least one secret to make them more tolerable: Always pack the tent poles and matches myself.

Mayo Mathers is a TCW contributing editor and freelance writer living in Oregon.