but should
Verla Wallace 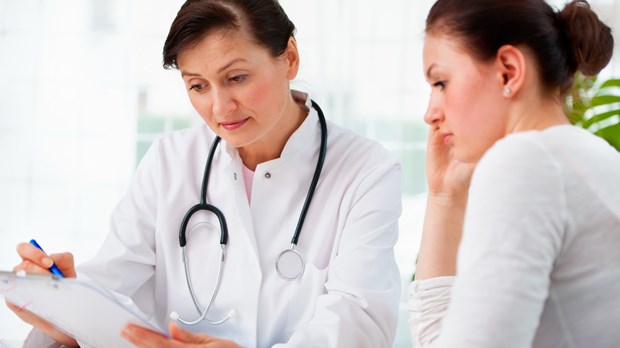 Sitting in a paper gown atop the examination table, I began to fidget. My internist—probably ten years younger than I—scanned my medical data. "Well, I'm not telling you anything you don't know. Your heart and lungs sound fine. The Pap smear results will be back in a couple days. Your mammogram looks fine. But your cholesterol's up, your weight's creeping up, and the Tagamet apparently isn't helping your stomach troubles. Then there's the insomnia … " He closed the folder, folded his hands, and looked me in the eye.

"You know, Verla, each of your symptoms has a stress component. Is there anything else you'd like to share about what's going on with you?"

Involuntary tears trickled down my cheeks as I stared at the floor. Why was it so hard to tell him? My marriage was in crisis, and I was humiliated by my inability to "fix" the most important relationship in my life. I was depressed, heartbroken, and didn't know what to say. As it turned out, I didn't have to. My body announced it for me.

When thirty-eight-year-old Margaret, single mom to three active boys, sought the help of a healthcare professional for emotional stress, she was eventually asked, "Could you be an alcoholic?" Margaret vehemently denied it. "When I got back to my car," she says, "I remember being shocked that she knew! But instead of dealing with my problems, I spent my next several appointments letting her know she couldn't possibly be right. I was determined to protect my image. That was all that mattered."

Despite a society willing to "tell all" on Oprah or Hard Copy, many women—especially Christians—have a hard time opening up to healthcare professionals committed to their wellness. Physicians and their patients agree that it happens. Why it happens is more complicated.

Betty, a vibrant, attractive sixty-four year old, says there isn't always a fancy reason. Something as basic as an age difference can get in the way. "I have an assigned female HMO doctor who's usually in a hurry," Betty says. "She's young, single, and not a Christian. There are times when I would like to ask questions about sexual relations with my husband, but because of our age difference and different value system, I can't do it."

Dr. Katherine Hodgman, a family practice physician for twenty-four years in Barrington, Illinois, says Betty isn't unusual. Women over age thirty-five often have trouble talking about subjects they were taught were not "nice" to discuss. "I've had women tell me, after years as my patient, that they've never even consummated their marriages. Younger women, on the other hand, are more open to talking about sex."

"Often women struggle with insecurity," Christian psychotherapist David Carlson of Palatine, Illinois, says. "They don't believe in themselves enough to say, 'Hey, listen to me! This is important. I'm hurting here.' It's even tougher for Christian women who are trying to live out their church's teachings on what constitutes a godly woman."

Dr. James Stough, a gynecologist for thirty-eight years, goes one step further. "Think about the kind of things women have the most trouble discussing with their doctor—domestic violence, alcoholism, STDs, incontinence, depression, weight. They all involve a woman's view of herself, or at least what she's been told about herself by people in her life. Even a medical condition like a sexually transmitted disease may have been acquired in the course of expressing deep feelings to an unfaithful husband who infects her. As medical professionals, we need to remember a woman's never struggling with just a medical condition. She's talking about her whole person."

"I know women who have struggled with weight for a long time," Dr. Hodgman says, "and they've never been able to discuss it. It's a physical condition that causes great emotional pain. They don't want to get undressed for a physical. They'll avoid getting a Pap smear or a breast exam—all because they're too embarrassed and ashamed of their bodies."

Christian medical professionals interviewed for this article unanimously agreed that faith—which should be a plus in a person's life—can be another reason women don't open up to their doctors.

As much as I hate to admit it, I realize that's been true in my life as well. Over the years I've led Bible studies and women's groups and discipled women on the fruits of the Spirit. So when my marriage crumbled, I felt an overwhelming sense of failure at not being able to handle this painful life event more successfully.

Dr. Stough says welcome to the club. "I see lots of Christian women who feel that if they were 'right with God,' they wouldn't have this problem—or that they should be able to handle it. Maybe they've had someone at church read them a passage of Scripture and intimate it's the answer to their problem. It may be full of truth and wise counsel, but it doesn't make their problem go away. So they feel guilty."

According to Dr. Hodgman, this is even more true when a woman's own choices are responsible in some measure for her medical condition. "She may have an addiction to food, alcohol, or something else she's not ready to give up. She may be hiding the fact that her husband's cheating on her because she's not ready to abandon her carefully cultivated image of the perfect happy marriage. She's certain people will judge her harshly or urge her to do something she's not ready to do, so she doesn't tell her doctor what the doctor really needs to know."

Margaret, the single mom, says, "I can't imagine sitting in my women's Bible study and saying, 'I have a problem with alcohol' without people verbally and physically detaching from me. For all the talk of redemption and forgiveness, the people I know still consider it a spiritual or moral flaw."

Finally, Dr. Stough says doctors are partly to blame for a woman's inability to open up. "We were trained in medical school to make our diagnosis, prescribe our treatment, then move on to the next case."

Darcy, a twenty-seven-year-old secretary, agrees. "I went to see my doctor recently for a knee injury. Everything he did, every question he asked, was strictly about that knee. He never even looked me in the eye. You leave and think, I wanted to ask about my jaw, but you figure, His time is too valuable. Hey, I guess all my fifteen minutes buys is a look at the knee."

Dr. Stough admits it happens. "Doctors—in fact, men in general—are not as experienced with communicating with a woman on a feeling level. Even if he is sensitive, the woman may have already struck out trying to talk to her husband, her father, or her pastor. So by the time she reaches her doctor, she doesn't expect to be taken seriously and doesn't even try."

What You Can Do

Discovering the cause of your reticence will help you know how to tackle it and what options to consider first. You may even have to acknowledge that part of the problem is outside your control, and work around that reality. For example, Dr. Stough says the changing healthcare environment is making matters worse. "Since more patients are forced to go to a doctor in their employer's 'network,' physicians contract with those insurers in order not to lose patients. But those insurers may pay them only 40 percent of what they used to charge. To make up for it, doctors have to see two or three times as many patients just to break even." That's not a system that fosters much empathizing. Still, if you do have a choice, search for a physician you trust who's willing to listen to you.

If you're fortunate enough to have a compassionate, caring doctor, ask yourself if you are the problem. If so:

Take the initiative and get help. "A doctor can't fix a problem if he doesn't know what it is," says Dr. Stough. "If you take a car into a mechanic and tell him it doesn't work, but you don't tell him how it's been acting, he's at a disadvantage in trying to fix it. A woman needs to divulge what's really going on or her doctor can't fully help her."

Face your fears. Take the small-step approach. What one thing can you do today to address this problem? Can you journal about what seems so scary to help you focus your thoughts? If you don't yet have the courage to be totally honest with your doctor, is there one trusted friend with whom you can be truthful? Someone with whom you could role-play what you'd like to say to your doctor?

Thirty-one-year-old Jeannine had been married two years and had been afraid to tell anyone that sexual intercourse with her husband was painful. "I was raised in a family where we didn't talk about such things. But when it began to affect my relationship with my husband, I took a deep breath and sought out the counsel and prayers of a trusted older Christian woman I knew could keep a confidence. That gave me the courage to talk to my doctor. God used both the prayers and the doctor to solve the problem. But it took me two years to ask for their help."

Forgive yourself. Whether it's guilt for having a medical problem you think you as a Christian should be able to handle, or guilt for keeping it hidden or denying a serious problem exists, give yourself the same measure of grace God extends to you. Ephesians 1:7,8 says, "In him we have … the forgiveness of sins, in accordance with the riches of God's grace that he lavished on us." No puny forgiveness allowed. Be lavish. That's his model.

If being more assertive and honest with your doctor still seems too big a leap, therapist Carlson urges women to consider the high cost of silence. "Keeping silent reinforces a sense of hopelessness and of never being understood."

Dr. Hodgman says the consequences of silence or procrastination can even become a matter of life and death. "One woman who was spending the winter in Florida ignored severe abdominal pain and cramps because she wanted to wait until she came back up North for the summer to see her regular doctor. When she got home she found she had advanced uterine cancer."

Christian author Elizabeth O'Connor, in her book, Cry Hope, Cry Pain, reflects on her own frustrations in getting medical help during a severe siege of crippling arthritis that lasted twenty months. "Today, to qualify as my doctor," she writes, "a physician must indicate by gesture or word that I am an esteemed consultant and partner in my body's healing process. Despite the physician's years of study and practice, there is an experience that only I know—the one of being inside the body of the patient."

I've taken O'Connor's words to heart. Today I'm a more aggressive medical consumer. I go to see my doctor with a list of questions or concerns in hand. I remind myself that if it's important to me, it's important. And I actively reject inappropriate shame and guilt. If I've contributed to my difficulty, I work hard to "own" my part before I face the doctor and discard the condemnation that doesn't come from God. It's a new discipline, but one I believe our heavenly Father—who highly values women and their wholeness—will eagerly support.

Verla Wallace is an author, speaker, and spiritual life coach. You may contact her through her blog, Pilgrim on the Loose, at www.pilgrimontheloose.com, or at verla@verlawallace.com.