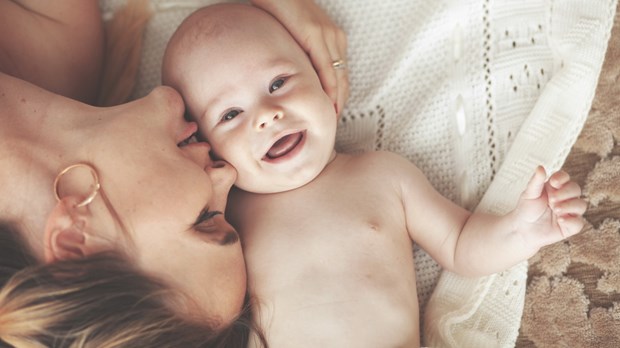 My husband, Jim, and I are new parents. And like all new parents, we hit a wall of exhaustion around 8 p.m. That's when we finally get our sweet little Emily to bed and can have some "couple time." For us, "couple time" consists of figuring out who has the energy to get plates out of the cupboard so we can eat a real meal and who gets to pick up Emily's trail of books, toys, and assorted shoes (she's into shoes right now).

Before long, we drag ourselves off to bed, more than ready for some sleep. As we turn out the lights and fade into dreamland, we look at each other and say, "Isn't she wonderful?"

People tend to think of the first year of parenting as a fraternity hazing—a test you have to get through before you can join the ranks of real parents. Near the end of my pregnancy, other mothers felt the need to tell me all the difficult parts of being a mother—the lack of sleep, the mess, the stress, the absence of a sex life. Their intent was to prepare me for the sometimes-rough road ahead. But nobody told me how amazing that first year is.

No one ever told me that watching a child grow and change is one of God's greatest gifts. Even if they had, I don't think I could have grasped what they meant. Really, there aren't words for what it feels like to be a parent. Our vocabulary can't wholly explain the wonder of the first year.

The other night, Jim and I were talking about Emily, like we usually do. He asked me, "What's been the best part of being a mom?"

I thought a while, then answered, "It's watching another person become."

Think about it: In every other relationship, we meet a person at a point along their journey through life. My friends are people I met when we were 8 or 19 or 27. We know only parts of each other's lives.

Even the most intimate relationships start in the midst of a life being lived. I met Jim when he had a good 24 years under his belt. I "met" my parents when they were a third of the way into their lives.

But with our children, we are there from the get-go. We are there for the firsts, for the moments that shape them, for the most amazing changes of their entire lives.

As our daughter shows us who God made her to be, we will uncover more about ourselves.

Like all mothers feel, the moment I first looked into my baby's eyes will never leave me. Even now, more than a year since that early morning, I can feel the intensity of meeting this child who had been given to me. I get teary at the memory of her sweet face, her bright eyes seeing my face, the only one she'd ever seen, for the first time.

But what I remember most about that moment is seeing in Emily the face of my maternal grandmother, who died four years ago. As the doctor handed Emily to me, I thought, I know this face. She shares the rosebud-shaped mouth and big brown eyes of my grandmother, my mother, several of my aunts and cousins, and me. People remark how much she looks like me. It would be easy to see Emily as an extension of me. But if nothing else, her first year of life has shown me that Emily is not me.

Over the course of Emily's first year, she has grown from tiny infant to a little girl who can think, communicate, and act by herself. She has begun to understand a complex language. She has figured out a range of physical skills without our help. She has developed a personality that shows traces of mine, traces of her father's, and plenty that is all her own.

From the first few weeks of her life, we saw glimpses of Emily's personality. She was incredibly alert. Most of the pictures (and there are plenty!) from those first weeks show Emily wide-eyed and awake, taking in the action around her. We knew she was going to be curious and interested in everything around her. Sure enough, as she's gotten older, she's wanted to see, touch, and taste everything she can get her hands on.

We've also seen in her a determination to accomplish whatever she sets her mind to. Take the day she learned to roll from her back to her tummy. With her parents watching and cheering her on, she moved her arms, her head, her legs and got so close, only to tip onto her back again. Again she rolled, we gasped, she tipped. But finally, as we sat with the phone in hand, ready to call grandmas, she maneuvered herself to the fulcrum of the flip and successfully landed on her tummy to much applause from the gallery. For the rest of the day, she rolled and rolled and rolled, so proud of her big accomplishment.

We saw that same determination as she learned to scootch across the floor in a masterful army crawl, as she began to rock on her hands and knees in an attempt to move on all-fours, and as she strained to pull her top-heavy little self from sitting to standing. At each stage, Emily has shown that when she sets her mind to something, she will get it done, no matter what.

We have also seen Emily's sense of humor. Once, I was changing her diaper, so her onesie was pulled up around her tummy. She grabbed the edge of her onesie and pulled it to her face. The next thing I knew, she had covered her face and was lying there, waiting for me to play my part. "Where's my Emily?" I said to her, and down came the shirt to reveal a laughing girl, tickled that she'd made her mom play a game.

God has graced Jim and me: We get to watch one of his precious children grow. We have the privilege of sharing her moments of discovery and her wonder at what she finds. She is a gift to us, one we will learn from daily. As she shows us who God made her to be, we will undoubtedly uncover more about ourselves as well.

The first time Emily stood at the coffee table, I thought, How can my little baby be doing that? She still looked like the babe in arms she had been just a few months earlier, but there she was, standing up, exploring the world from a few inches higher. She was becoming her own person, and I was there to see it.

Carla Barnhill is an associate editor for Campus Life magazine. She and her family live in the Chicago area.

Copyright ©1998 by the author and Christianity Today.