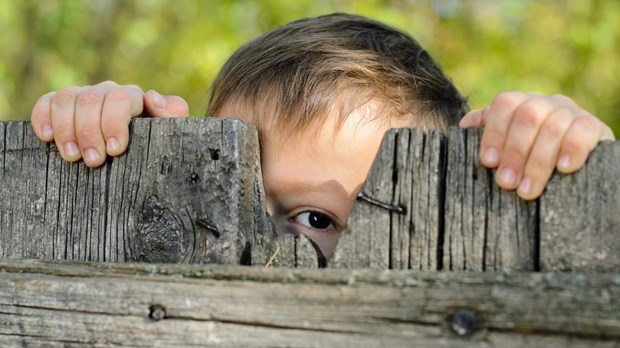 There I was, just a young girl sitting in the back seat of a 1970 Plymouth Duster, leaning forward to eavesdrop on my older sister's conversation in the front seat.

I strained to hear every word as my sister's friend, Janet, described missionary life. Tales of smuggling Bibles in suitcases behind the Iron Curtain and being arrested by the KGB sounded more like an espionage movie than missionary work. Sign me up! I thought. But then another thought followed: I'm just a kid. I can't do anything now. I'll have to wait. I was wrong.

We tend to underestimate the spiritual abilities of children. And who can blame us? In an age where kids go from watching Barney to piercing their bellybuttons, we wonder how God can possibly use children to spread the Good News.

It's even harder to imagine our own children as "called" or "anointed" to do God's work when we can't even get them to sit still for nightly prayers. Yet God has not limited his calling to the educated and mature. Instead, he calls the honest, obedient and pure in heart. I don't think it's a coincidence that these are often characteristics of children.

They might not be ready to smuggle Bibles into closed countries, but our children are more than ready to act as missionaries in their own communities. I know because I've seen my own children reach out to their friends and neighbors with a confidence and purity not often seen in even the most spiritually mature adults. And they've done it by acting as God's very own secret servants.

Our family lives in an apartment, so we see lots of people each day. When we first moved in, the kids and I realized there were all kinds of ways we could reach out to our neighbors. But we didn't want to just go knocking on doors. Instead we wanted to find ways to really help people and meet their needs. That meant conducting a little spy work.

First, the children got our neighbors' names off the mailboxes and prayed for them. Then we watched and listened. Who had small children or babies? Who was single? Which people listened to rock music or watched sports? What languages did they speak (several nations were represented in our building)? Knowing these things helped us know how to minister to each person.

For example, one family had a new baby (everyone in the building knew this, since the baby cried all the time). On my next trip to the grocery store, I picked up a can of baby formula to give to the mother. When the kids and I delivered the formula, the mother was extremely grateful that someone cared. We made a point of occasionally giving her baby food. Through this small gesture, she knew we cared about her. And God answered our prayers too, as her baby began to sleep through the night.

While visiting a Christian bookstore, the children found a Bible tract and gift to suit a single man living upstairs who loved sports (we heard every sports broadcast through the screened windows). Other neighbors who didn't speak English received Bible tracts in Spanish or Creole. For families with children, we bought small toys and tracts for children. In prayer, we sensed God directing us in each step.

While ministering in our neighborhood, God taught our family some important lessons.

First, our children's innocence disarmed the neighbors we approached. Taking a Bible tract from a child's hand was less threatening. In fact, no one refused it. (Who can say no to such sweet faces?)

Second, the children spoke the truth without fear of what others might think. Let's face it, children tell it like it is. Most of us have experienced an embarrassing moment at one time or another? when little Amanda announces that Aunt Bessie's teeth are falling out or Uncle Ernie's cigar breath stinks. But on the flip side of those moments are the times when children's lack of pretense makes them the perfect messengers for God's truth. In offering tracts or other gifts of a spiritual nature, our children shared the Gospel without hesitation.

Third, our children developed a deeper love for God through serving others and discovered a world of needs far greater than their own. When they made sandwiches and fed the homeless people on the street corners, they were confronted with physical evidence of how much they had. My children realized how blessed they were and, in turn, were grateful to God for it.

Finally, the simplicity and purity of the children's prayers proved that God can use children to fulfill his Great Commission. Without the fancy words, my children prayed daily for our neighbors and our community, and souls were saved as a result.

Children don't have to wait until adulthood to answer God's call. And they don't have to travel around the world to act as missionaries. People in need aren't only hidden behind walls of stone and barbed wire, but are living behind the chain-link fences of our neighborhoods. God is ready to use the unique gifts he's given our children. It's up to us to help them find ways to do just that.

Rebecca Totilo is a former missionary, as well as an author and homeschooling mother of four. She lives with her family in Miami, Florida.