Help your family create a code of behavior everyone can live with
Kari Smalley Gibson, with Stanley C. Baldwin 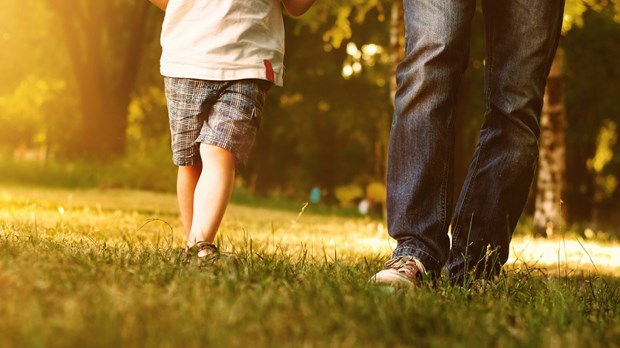 Recently, my 2-year-old daughter, Hannah, was with me in a discount department store when she decided she had to have a Barbie doll. I said no. She cried and screamed, and guess what I did? I bought her the doll. Big mistake.

Like most parents, I have wonderful intentions of negotiating with my children when they beg for things such as Barbie dolls. And, like most parents, I occasionally do something I wish I hadn't—such as give in to a screaming toddler. Those are the times I'm re-minded how valuable it is to have a family contract.

My dad is Gary Smalley, who is widely known for the Love is a Decision seminars he presents across the country and on video. While my family wasn't perfect, I had the benefit of growing up in a home that was filled with love. My brothers and I knew the importance of valuing and caring for each family member. Even Dad, the "expert", wasn't immune from needing to relearn this lesson.

Take "the flick," for example. Dad had this habit of snapping his finger against our heads to get our attention or to show he was displeased with our behavior—the flick, we called it. My brothers and I hated the flick and decided we wanted Dad to stop. My brother Michael agreed to take the first step. "We all met," Michael informed Dad, "and we don't like it."

There was one overriding principle in our family. Everyone was to be valued as a person and treated with respect. Mom and Dad taught us: "Love each other, and that means be kind to each other."

So Michael told Dad, "Not only do we not like it when you flick us, but we also don't feel valued or respected."

We knew Dad would keep his word. After all, we had a contract.

My parents introduced us to the idea of a family contract when I was quite young. The contract was a list of behaviors that we all agreed on and a list of consequences for misbehavior. Once we had a contract written out, we'd sign our names and post it where we could all see it. So, when my dad agreed to stop flicking us, we added it to the contract. Since Dad had to have a consequence if he flicked anybody again, it was agreed he would have to pay the "flickee" one dollar.

As you can imagine, my brothers and I were ready to catch Dad in any infraction of the flicking agreement. Not long after we agreed to the penalty, someone came to our front door selling candy. Michael answered the door and wanted to buy some candy. He ran to our father and cried, "Flick me, Dad; I need a dollar!"

It became a standing joke. Whenever we needed money, we'd say, "Flick me, Dad." I don't think Dad ever did it again.

I didn't know it then, but through the family contracts, my parents were creatively instilling their values in us. The contracts were based on Jesus' teaching that one of the most important things God requires of us is that we love one another. My parents asked themselves, "What kind of home will we have if we give priority to loving one another? How will that play out in how we relate to each other?" The answers to those questions formed the basis for the terms of our contracts.

Making a family contract may sound formal or legalistic. To some it smacks of rules, conformity and conditional acceptance. Wrongly used it could carry all of those negative characteristics. But in our house, it was a positive thing, often providing great fun.

A contract doesn't have to be a long, exhaustive list of rules. When I was 6, and my brothers were 5 and 3, our family contract was posted on a "Snoopy" white board. To help us remember our agreements, my parents listed the terms under five "C's".

The first was "Conforming." We agreed to conform to what was stated in the contract. That eliminated a great deal of whining, arguing and negotiating. We had already stipulated what was expected of each family member and had all agreed to live by those expectations

The second "C" stood for "Cleaning." Since we were young, "cleaning" entailed straightening our rooms each morning, putting away our toys and cleaning up our own messes.

Third was age-appropriate "Chores." For me, a 6-year-old, it involved setting the table or clearing it after a meal. Our chores didn't take long or require much of us, but they did make us responsible for helping the household run smoothly. We were expected to do our chores without complaining since we had agreed to them when we drew up the contract.

Fourth was "Courtesy." Valuing other people meant being courteous to them, which ruled out hitting or hurting with blows or words.

The last C stood for "Caring." To value others meant we cared about them—not just about each other's ultimate outcome but also about the daily concerns each of us faced.

For violations of the contract, we devised appropriate consequences. For instance, failure to clean one's room might mean losing TV privileges for an hour.

Each evening after dinner, we had a brief contract meeting. Mom and Dad would praise us for the things we'd done well. If any of us broke the contract, nobody made a federal case of it. We simply paid the consequences. These meetings were often my favorite part of the day—it felt good to have my parents' attention and to be able to talk about what I'd done that day.

Each of the five C's was something we all were capable of doing. Each was something we agreed was important to our well-being as a family. The terms of the contract changed as circumstances changed and as we grew older, and it worked because we children always participated in developing it.

To some busy parents, the idea of a family contract sounds overwhelming, like one more big project to squeeze into an already stretched schedule. But a family contract is really just the opposite: it can save you significant amounts of time and energy. Sure, it takes effort to draw up and implement a family contract. But it's effort spent in direct, purposeful interaction as a family. As each family member talks about what makes him or her feel valued—and devalued—both children and parents feel affirmed and nurtured.

In the long run, the contract saves a great deal of time and effort by eliminating the "crisis management" style of parenting. There is much less agonizing and parent-child wrangling over what behaviors are acceptable and what penalties will be imposed. Those details are already spelled out. And that's the kind of thing that helps parents get through toy-store tantrums and other tricky parenting moments.

Of course contracts, like other parenting techniques, fall short of guaranteeing perfect results. The points of the contract have to be age-appropriate and realistic. Parents also need to recognize that contracts probably won't apply to every situation. And they certainly don't have to be hard-and-fast rules for every aspect of family life. For example, my parents never did set an age at which I could date. Instead, they watched for evidence that I was ready. We didn't add "dating" to the family contract, we just played it by ear.

Contracts give parents a useful tool to help their children love others, especially other family members. Jesus said the first commandment is to love God, and the second is to love one another. I can't help but be thankful for parents who nurtured both of those when I was growing up.

Kari Smalley Gibson is the co-author, with Gary Smalley, of the Forest Tales series of children's books (Gold 'n' Honey). She and her husband, Roger, live with their two young children in Missouri. Stanley C. Baldwin is a writer and lecturer living in Portland, Oregon.