And they last all year long!
Susan Alexander Yates 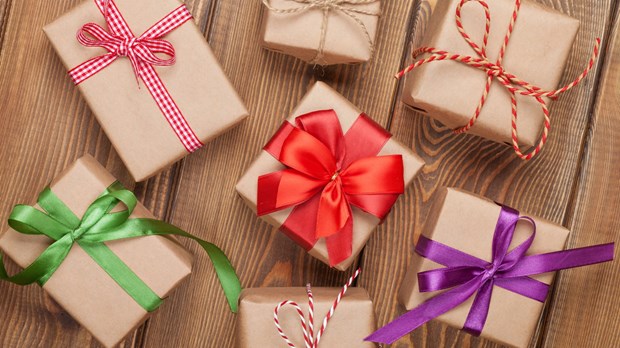 It was almost Christmas, and I was sick of shopping. But here I was at the mall, waiting for someone to move so I could snag her parking spot before another last-minute shopper grabbed it. Why was I here again?

It was because my then 11-year-old son, John, was desperate for a new paintball set. "It's the only thing I want!" he exclaimed. I knew he'd probably use it once and then the attraction would fade.

Gifts like that don't have a long shelf life. Instead, it's the intangible gifts we give our kids every day of the year that have a far greater impact than any Christmas toy. Here are nine of them.

The Gift of Affection

When I was young, my father often pulled me into his arms and said, "Susan, I love you so much!" "Why?" I'd ask. "Just because you're mine," he'd respond. Dad was always verbally and physically affectionate. That affection gave me a glimpse of a God who loves me simply because I belong to him.

Even if you didn't grow up in an outwardly affectionate home, hug your kid often and tell her regularly that you love her. While it may feel awkward at first, you'll get used to it. No matter where you came from, you can be the first of a generation of healthy families.

The Gift of Family Traditions

Whether you plan a special family dinner one night a week or have a nightly bedtime "ritual," traditions don't have to be big. But their payoff is tremendous!

For example, my friend Lolly, who has four young sons, takes a few minutes each night as she puts them to bed to write messages with her finger on their backs. Since they're learning to read, they guess what she's telling them. As she spells out messages such as "I love you," their excitement grows. Can you imagine what her sons will be doing with their sons in 20 years? Mom's alphabet game!

The Gift of Discipline

A child who calls the shots at home becomes insecure, not secure. The true goal of loving discipline is to teach our child to obey us—so ultimately she'll obey God.

The Gift of Laughter

Teach your child to laugh. Collect funny lists and read them at dinner. Check out a joke book from the library. Pray for a sense of humor in your child. Develop friendships with people gifted in humor. But take care your humor isn't tinged with sarcasm. Sarcasm appears to be funny, but it causes pain.

The Gift of Involvement

Get involved with your child's school. When our son, John, was in student government, I went along on his high-school student leadership retreat as a chaperone so I could develop relationships with some of the school personnel and encourage them. I was also able to become acquainted with some of the kids my son saw daily.

For 17 years, I hosted a weekly prayer group of moms whose kids were in the same public school system. We prayed for our kids, the school staff, and teachers. We've seen a teacher come to Christ, a staff prayer group begin at the school, and wonderful happenings in our own hearts and in the lives of our kids and their teachers.

The Gift of Hospitality

As your child reaches the teen years, you may have to make the choice to limit your weekend social life in order to be at home so he can have his friends at your place. Do all you can to make your home the teen center of the neighborhood. Have lots of food—that'll guarantee their appearance!

One of the most important purchases I ever made cost $10. It's big, ugly, and takes up room I'd rather use for something else. It's a ping pong table I got at a garage sale. But it's a kid magnet. Many a night I've been kept up late by the noise of an intense game. But the kids were at my house!

The Gift of Hope

All kids need hope—but especially teens. They don't like their looks, their personality, their friends (or lack of!), their siblings, even their parents. I remember bursting into tears in eighth grade and saying to my mother, "I'll never be popular! I'll never have friends!" My wise mom responded, "Your turn will come." She gave me hope. She didn't panic; she knew I was normal. Her confidence gave me confidence.

Study your child; observe how God's packaged him. Then give him ideas on how to develop his gifts.

The Gift of Adult Friends

I'm forever grateful to our youth minister, Jeff, who for four years discipled our boys. He studied the Bible with them, prayed with them, shot basketball with them, talked with them about sex, lust, girls, integrity, and other tough topics. The boys needed an older adult who wasn't a parent—someone they could bounce things off.

Encourage your child to be involved in a fellowship group with older positive role models, especially during the teen years! And don't feel threatened because your child wants to talk to someone else instead of you. Be grateful. Parents need God's people to fill in the gaps.

The Gift of Forgiveness

Our kids know their parents aren't perfect. But they're not looking for perfection—they're looking for a mom who's willing to say, "I blew it. I'm sorry. Will you forgive me?"

Forgiveness is the most important ingredient in the family. If our children see it practiced in their home, they'll be more likely to practice it with their spouse and children one day.

Susan Alexander Yates, the mother of five, is the author of And Then I Had Kids and What Really Matters at Home (both Word).

1999 by the author or Christianity Today/Today's Christian Woman magazine.