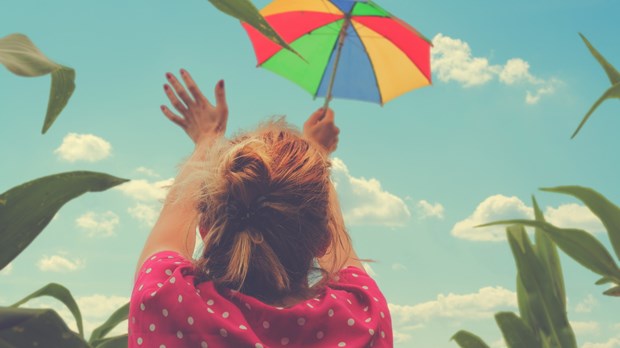 It started out like every other lunch I'd had with my friend Ann: I ordered mu shu pork; she ordered beef in oyster sauce. I asked for fried rice; she wanted white. Then with chopsticks in hand, we dug into our food. Nothing unusual, nothing surprising … that is, until we were halfway through the meal.

I'd just lifted my little round teacup to my lips when Ann looked me straight in the eye and said, "There's something I need to tell you about me."

"Sure. Shoot," I said, shrugging. What could she tell me I didn't already know? After all, we'd been good friends since high school, more than a decade ago. I remembered those days of boy-watching, deciding which guys were "hunks" and which were "nerds" while we munched matching cones of Baskin-Robbins ice cream. We talked about God, too. Or at least I talked about him. Usually Ann gave me her "that's nice for you" look, then suggested a trip to the mall. I'd gotten used to her disinterest in Christ, just as she'd become accustomed to my "guess what I learned at Bible study" stories. Maybe we'd grown older in the several years, but our friendship hadn't changed, had it?

Ann's gaze didn't waver as I set down my teacup and leaned forward expectantly. Then she dropped the bomb. "Marlo," she stated, her voice shaking a little, "I'm a lesbian." Boom. Just like that.

"Um, uh, you're a … gulp," was my oh-so-articulate response. Then, as I sat and stared at her, dumbstruck, the words of an old memory verse flitted through my mind: "Be prepared in season and out of season; correct, rebuke and encourage—with great patience and careful instruction" (2 Tim. 4:2). In truth, I was anything but prepared, so I simply said "Oh," then stuffed another bite of mu shu pork in my mouth.

After Ann's startling revelation, I had no clue what to say next. Should I blast her with my convictions? Tell her the gay lifestyle is sinful? Or nod and say, "Gee, that's great," even though such words would be a lie? How would Jesus want me to respond? What would he say if he were in my place?

So she's a lesbian … now what?


According to Kate, a spokesperson for Grace Unlimited (a ministry that helps homosexuals leave the gay lifestyle), it's important to remember that God condemns homosexual behavior, not homosexual people. Because of his love for us, he prohibits behaviors he knows will harm us. So, instead of responding with disgust or condemnation, suggests Linda Schultz, who ministers to many lesbian friends, we need to exemplify God's love for the person.

Today, Ann can tell me how she felt when she dropped her bombshell over mu shu pork and beef in oyster sauce. "I was so nervous about telling you because I knew you were involved in Christian groups," she says. "Coming out to a friend can be frightening. It means exposing your deep feelings and risking rejection. You didn't say very much, so I wondered if you were thinking, You're going to go to hell, but didn't say it because you were being polite."


But I can't agree with her lifestyle …

So instead of saying something such as, "How could you?" or "That's a sin," it's best to let the person who's coming out simply talk. She may not have had a chance to talk about this to anyone yet.

Rather than give Ann the dumbstruck look, I should have asked questions: "How long have you been thinking about this?" "Have you told your family?" "How long have you considered yourself a lesbian?" "What factors led you to think about homosexuality?" By responding with questions and being a caring listener, I not only could have exemplified God's love, but earned the right to share more deeply about my relationship with Christ.

After I'd gotten over my initial shock, I began wondering how far I should go in arguing my beliefs with Ann.


I had to see past the "gay" label to the real person.


According to Anita Worthen and Bob Davies, authors of Someone I Love Is Gay (IVP), "Sometimes the best argument is a loving action done in silence." And Linda Schultz of Grace Unlimited insists we don't have to compromise our belief in Scripture's stance on the subject of homosexuality. Rather, we can simply agree to disagree. She suggests saying, "One of us is wrong. So why not let the Holy Spirit be the one to let us know who is right?"

The important thing, asserts Kate of Grace Unlimited, is to maintain an open dialogue in which both parties feel respected. "Many lesbians who've been condemned, ridiculed, or rejected by Christians turn to homosexual organizations for the support they feel they need, thus becoming more entrenched in their beliefs and behavior," she says.

Eventually, I learned I could accept Ann's choice of lifestyle without condoning it. To do that, I had to see past the "gay" label to the real person.

To be honest, at first I found my relationship with Ann uncomfortable. There we'd be, picking at our Chinese food, sitting in a movie theater, or hanging out at the coffee shop while I wondered how to act, what to say. Should I mention her homosexuality? Should I ask about her social life? How should I treat her girlfriend? Could I discuss what I was learning in my Bible study without her feeling as though I was condemning her?


I feel so awkward.


Meeting her girlfriend, Sue, was the most difficult. They held hands. I fidgeted. They talked about a recent trip to the West Coast. I stared at my hands, the ground—anything but Sue and Ann. But as the evening progressed, I discovered that even Sue was just another person with likes and dislikes, hobbies, hopes, and pet peeves. Being a lesbian was part of her life, not all of it. She was simply a woman who needed Christ. Just like Ann.

As Ann continued to see the importance of Christ and Scripture in my life, the issues of the Bible and homosexuality came up naturally, without me having to force the subject.

One day, while we sat and stirred coffee, Ann looked straight at me and said, "Marlo, why are Christians so judgmental about homosexuality?"

Unlike when she first dropped the "I'm a lesbian" bomb, this time I was prepared. "It's not being judgmental," I replied. "It's having integrity. If I say I believe what the Bible says, I have to believe all of it, not just the parts I like, or the parts that are convenient to believe. So when I read passages like Leviticus 18:22 and especially Romans 1:26-27, I have to believe the homosexual lifestyle is wrong. If I were to say 'it's okay,' then I'd be a hypocrite, wouldn't I?"

Ann nodded. "I guess so. So, you really think being a lesbian is a sin?"

"I believe that engaging in the lesbian lifestyle is a sin, yes. But I also think that committing adultery is a sin, lusting is a sin, getting drunk is a sin, and hating someone else is a sin. In fact, we're all sinners. If we say we're not, then we're liars. But through Christ, God can forgive us. It's as simple as that."

Ann lifted her coffee cup. "Guess I hadn't thought of it quite that way," she murmured and took a sip.

As time has passed, the answer I've found to all my questions turns out to be a simple one—just be honest. As Ralph Waldo Emerson says, "A friend is a person with whom I may be sincere. Before him, I may think aloud."

Today, Ann and I both know we can share openly with each other. Sure, she knows I don't approve of her lifestyle, but she also knows I love her anyway. And though our jobs have taken us to different cities, and we don't get together as often as we once did, I still haven't given up hope that Ann will accept Christ someday, too.

I continue to show Ann God's love and pray that one day she'll choose to give her life to him. And on that day, I'll be rejoicing with the angels in heaven.

How to be The Kind of Friend She Needs

Here are 8 tips to help you maintain a healthy relationship with your lesbian friend and steer clear of trouble:

Check out these great resources:

For more information, contact Exodus International (206-784-7799) or www.exodusinternational.org, a Christian referral and resource network that can direct you to ex-gay ministries in your area.