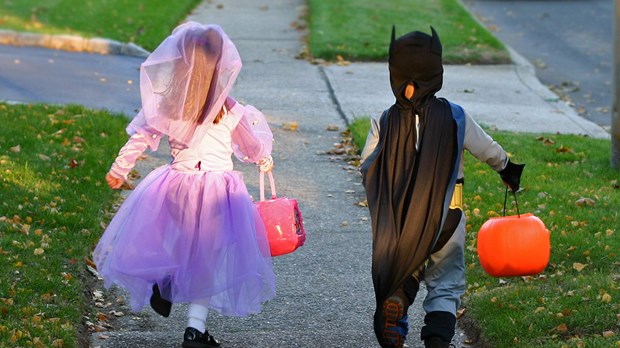 I can recall October 31, 1992, quite vividly. My daughter, Paris, was five, our son, Jordan, was three, and my baby, Capri, was only five months old. While Paris knew all about costumes and free candy, my husband, Frank, and I made sure she also knew why our family didn't celebrate Halloween.

Earlier that month, we'd politely informed Paris's kindergarten teacher she wouldn't be participating in any songs or activities that involved jack-o-lanterns, witches, black cats, or goblins. And we'd reassured Paris she could get candy from us any day of the year. Nonetheless, not wanting to seem unfriendly to our neighbors, I readied bags of candy to pass out to the other children who populated our tree-lined street.

At 4:30 P.M., our first flock of visitors arrived: Snow White, a Teenage Mutant Ninja Turtle, Yogi Bear with Boo Boo (brothers in real life), a ballerina, and a sailor. They looked so cute! Then, just before dark, the doorbell rang five times—obviously an impatient trick-or-treater. There at my open door stood a herd of about a dozen eager children, cautiously watched from the street by moms I'd met at PTA meetings. As my two children distributed the candy, I cradled the baby and stepped past the crowded doorway and onto the stoop.

"Hi, Ellie!" shouted Debbie, the PTA president. "We haven't seen you at any meetings recently. We're starting to plan for the spring fair. Let me know which booth you'd like to man. I recall you have some talent!"

I continued to burp the newborn and assured Debbie I'd attend the next meeting. Then, as I headed into the house, Debbie called out, "Hey, why aren't your kids trick-or-treating? No costume? No candy? No fun?"

I swallowed hard. She and her entourage were waiting—and wondering. Their herd of kids had run to the next house, the women had grown quiet, and for a moment, I could hear the autumn air.

They turned and walked away, but not before Debbie threw up her arms and shouted back with raw emotion, "But they're only children!"

"They're only children." Debbie's words provoked in me a strange sense of sorrow for myself and my kids. After all, Frank's one of four children, and I'm one of five. Growing up, we trick-or-treated our heads off—and it was fun.

Granted, those were different days. Safety was not an issue. And the evil that some now associate with Halloween didn't seem to exist. Today we live in a more hostile, less predictable world. Still, Debbie's retort kept echoing in my mind.

The next year, our children dressed as Bible characters and went to the Harvest Party at church. Eight girls in princess costumes identified themselves as Queen Esther, and an awful lot of candy was consumed that night. A year after that, we left New York for the kinder, gentler lifestyle of Virginia.

We'd only been living in our new home for three months when Halloween rolled around. Our children—now two, five, and seven—no longer believed it was more fun to stay inside and hand out candy. They shed tears that night, not whining, manipulative tears, but tears of true sadness. Paris came forward, her lip quivering, and said, "Mommy and Daddy—we're only children!"

My heart jumped and sank all at once.

"Please let us go trick-or-treating next year. We always play dress up and we have so many hats and costumes and wigs, so you don't have to buy any and we only want to get some candy and have fun with our friends! We know Satan is bad and we love Jesus, and I'm sure he'd walk around with us and get candy if he was here."

I wiped her wet face and held her closely. As I stroked her hair, I smiled as I pictured Jesus, as a boy, walking through Nazareth and receiving sweets from the local women during the Feast of Purim, a celebration of the Jewish people's deliverance from destruction at the hands of Haman. My thoughts were interrupted as the younger two approached the couch to show support. Jordan spoke first.

"We won't do any bad things. We'll be Christians for Halloween." Capri shuffled anxiously and said, "We weally just want a wittle candy and I'm gonna be Pooh Bear. Pooh is vewy nice."

So that year the Lofaro children went trick-or-treating for the first time. They dressed as a clown, a pirate, and, of course, Pooh Bear. The innocence and wonder of childhood are too brief.

I decided that since there's so much in this world that's been corrupted or distorted, we as Christians need to "take back" our religious and cultural celebrations such as All Hallows Eve (the night before the memorial celebration of martyred Christians known as All Saints' Day). While darkness permeates many areas of life, is this a reason for Christians to retreat? The abuse of inanimate objects such as pumpkins or cats mustn't reduce us to feelings of fear, anger, or confusion. After all, desserts aren't evil because some people overeat. Phones aren't evil because some people make death threats or prank calls. Nuclear power in itself isn't evil.

Similarly, there are no evil spirits in our pumpkins, nor do they roam in my neighbor's black cat. As for witches and black magic, the Bible is clear. All Hallows Eve ought to be a social, wholesome, and yes, even joyful time. For our family, it is.

Ellie Lofaro, a freelance writer and speaker, lives with her family in Virginia.