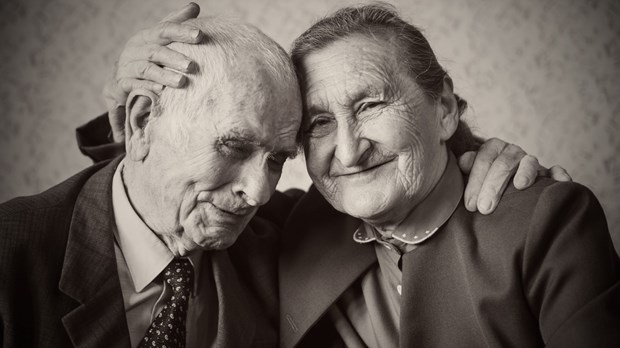 Several years ago, my husband, Robert, and I were shopping at Wal-Mart with our three kids. While waiting in the checkout line, my husband spotted an old friend and said hello.

"This is my new wife," his high-school buddy proudly announced, introducing the woman next to him in line. "We just got back from our honeymoon," he added, beaming.

Tell me something I don't know, I thought wryly. Three things gave them away: their tans, their blushes, and their smiles.

For a split second I envied that fresh, romantic phase of marriage. It only took another split second, however, for me to come back to reality. First of all, it's easy to smile at Wal-Mart when you're not chasing kids around. Second—and this is the clincher—I'd gladly trade newlywed blushing for being further along in marriage any day. Those newlyweds were still blissfully unaware blushes and butterflies turn into ritual and routine. In the 16 years Robert and I have been married, I've learned that it's by working through marriage's ups and downs that you develop the skills needed to build a lasting, loving relationship. Here are six tools we've discovered.

"Boy!" my husband, Robert, exclaimed when he opened the laundry room door recently and saw piles of neatly folded clothes. "You must've been in the mood to do laundry today!"

Of all the things I'm in the mood to do each day, laundry is never one of them. Rest assured, I quickly set the record straight: I only do the laundry because it has to be done. My family is under the impression I wash underwear and clean toilets because that's what I like to do. The truth is, being a good wife and mom often means living a life of self-denial.

Consequently, I find I sometimes need a time-out from the daily routine to keep myself going. I don't mean having regular quiet times with God—that's a given! But I've found it's also important to do something occasionally for myself outside of caring for my family. Even simple things can give me a boost, such as my private stash of chocolate hidden behind the frozen vegetables, a good cup of coffee, a dinner out once in a while, an annual getaway. On days when I feel ready to resign as a wife and mother, I take a few minutes, hours, or (if possible) days to refresh myself. Find out what rejuvenates you and let your family know when you need to kick back from the daily grind. Everyone needs a pick-me-up once in a while.

"What's wrong?" my husband asked, giving one final stab at prying information out of me as we lay in bed one evening shortly after we were married.

Robert's remark at dinner about the fish still being frozen had hurt my feelings, but I certainly wasn't going to tell him! After all, he should realize when he's being too harsh. Men are supposed to know these things, aren't they?

"Fine!" Robert said, giving up. "If you aren't going to tell me what's wrong, I'll give you the silent treatment, and you can see how it feels!" With that he clammed up and rolled over.

I didn't like it, but his approach worked. As tears began to flow, I crept over to him and whispered an apology.

That night comes back to me every time I'm tempted to resort to the silent treatment. My husband can't fix something he doesn't know is broken. Telling my spouse when something's wrong may prompt a disagreement, but as my mother-in-law says, "When you don't care enough to disagree, it's time to start worrying." I recall her words during the most heated arguments; they remind me that disagreements aren't all bad. Tell your spouse when something's bothering you, and keep talking.

3. Be Open to Counsel

If there's any issue on which Robert and I disagree the most, it's how to discipline our seven children. Our approaches are the opposite—Robert analyzes everything to death, while I'm often too hasty in my decisions. With children ranging from ages 1 to 13, conflict's inevitable.

For instance, when one of our sons continually interrupted our conversation recently, I thought my husband's rebuke was too harsh. I wasn't shy about saying so—right in front of my son. "Honey," Robert told me later when we had a moment alone, "if you correct me when I'm in the middle of correcting one of them, they won't see us as a team."

Though we agree we must be a team, child-rearing issues still challenge us. Every marriage faces issues that aren't easily resolved. When that happens, be open to counsel, whether from each other or an outside source. Find a godly friend or Christian counselor to confide in, someone you know will give you wise advice when you struggle with finding a resolution.

When we were first married, I often interrupted Robert when he presented his side of a disagreement. I knew it got under his skin, but I felt what I had to say was too important.

Then one Sunday morning, our Sunday school teacher said, "Don't think about the point you need to make the whole time your spouse is presenting his/her side. That's not really listening." I resolved to make a conscious effort to change my bad habit.

When another disagreement evolved, this time I listened attentively. "Well," my husband said when he finished, obviously astounded at my reserve, "aren't you going to say anything?" My response wasn't the usual whatever-pops-into-my-head; it was well-thought-out and deliberate. Because I wasn't reacting off-the-cuff, Robert found it easier to listen to what I had to say. Since then, I've found being slow to speak keeps strong disagreements from turning into heated debates.

"Do nothing out of selfish ambition or vain conceit," Philippians 2:3 – 4 reminds us, "but in humility consider others better than yourselves. Each of you should look not only to your own interests, but also to the interest of others."

5. Maintain Your Sense of Humor

For the first nine years of our marriage, I balanced our checking account. To say numbers don't come easily to me is an understatement, but Robert's long work hours left the responsibility mine. "Our finances are driving me crazy!" I blurted out after wrestling with our checkbook balance one evening.

Robert looked at me blankly, a bowl of vanilla ice cream in his hand. "I'm just glad it's you and not me!" he said jokingly, and we both burst out laughing. Laughter was exactly what I needed to ease my anxiety. Then Robert quickly assured me that if I needed him to, he would take over the bookkeeping.

Whether it's a tight budget, love-life ups and downs, or plain exhaustion, life can leave you both feeling haggard at times. As my mother says, "If I don't laugh, I'll cry." Humor not only eases tension, but also provides a lighter perspective on a situation.

As our wedding day approached, I smugly mused over what I considered to be the necessary ingredients for a successful marriage: God's blessing, God's timing, God's man. Surely nothing less than a carefree life of happily-ever-after awaited this bride and groom! Needless to say, I was shocked when our first argument evolved on our honeymoon and our second came shortly upon our return. I'm certain we averaged at least five arguments a week those first few months of matrimony.

"This is harder than I thought it would be," I moaned one day as Robert and I drove home up our bumpy gravel drive, fittingly symbolic of our new marriage. Though slightly offended, Robert admitted it was true. While neither of us expected things to be so rough during our "adjustment phase," we'd committed ourselves to each other before God, our families, and our friends. We were in it for the long haul.

Now, 25 years later, we know it's the strength of that commitment that keeps us together. Divorce simply isn't an option. Certainly God in his mercy permits divorce under certain circumstances, such as infidelity or desertion. But we do what it takes to make our marriage stand the test of time. We do it because God wants us to ("What God has joined together, let man not separate," Matthew 19:6); we do it for ourselves, our kids, and others who watch to see if Christ really makes a difference in our lives.

"I'm glad we didn't give up on us those first few years of marriage," I told Robert over our last anniversary dinner. "I'm thankful we hung in there long enough to realize marriage really does get better with time." Not that we've arrived at 100 percent peace, of course, but reaching this point in our marriage has been well worth the trip. Judging by those first few years, I never would have guessed we could learn how to argue fairly, give each other space, and depend on each other so freely. I'm glad we've got a marriage built to last.

Margie Sims, a freelance writer, lives with her family in Tennessee.

Copyright © 2002 by the author or Christianity Today/Today's Christian Woman magazine.