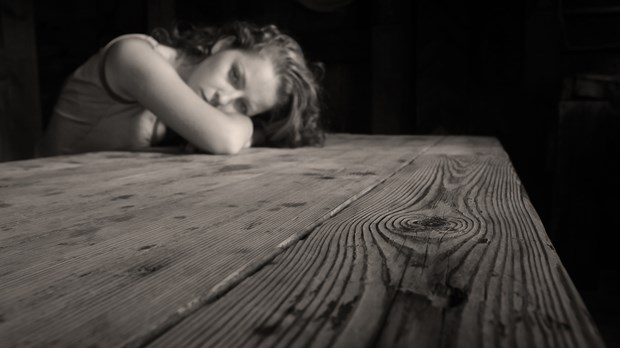 In my mind’s eye it’s as clear as if it happened yesterday . . . only in slow motion.

On the morning of that sunny California day, life seemed wonderful and bright. I was one month away from turning 21, a junior in college with a great summer job at Disneyland, and I was preparing to go away the next day with friends on a four-day water-skiing trip. But in 10 minutes of pure terror, all my hope and enthusiasm for life shattered.

I was home alone that afternoon. My parents were at work, and I was doing laundry before leaving for my waitressing shift at 4:00 P.M. I spent most of the afternoon going back and forth between the laundry room in our garage and the family room where I was folding clothes. I’d just sat down to watch a TV show when the door from the garage burst open. It happened so fast, all I saw was the man’s white pants and large black shoes. He had a cloth over his head, which he immediately flung over mine. I never saw his face. I was sitting a mere five feet from the door he entered, so I didn’t have time to respond. He gripped my neck with his thick, firm hands, nearly choking the breath from me. I must have screamed loudly because he kept yelling, “Shut up!” I remember his voice to this day. The neighbors heard me scream but didn’t respond. With great force, he knocked me onto the floor and threatened to kill me with his knife.

I pleaded for my life, offering him money, my brand new Minolta camera, the stereo. I didn’t care what he wanted, I just wanted him to leave me alone. I kept begging, “Please don’t hurt me.” He poked my back and shoulders with the knife and hit my upper body. But his plan wasn’t to steal; his plan was to rape.

Even in this moment of sheer terror, I silently prayed, Lord, let me live. Dear God, I want to live. When he was finished with me, he walked me around the house, his hands still gripping my throat, the blindfold over my face, the knife to my side. Evidently he was looking for a place to stash me. (The police later said I was fortunate. Usually when a perpetrator moves a victim from one room to another, his plan is murder.) He finally stuffed me in a kitchen cabinet.

As quietly as possible, I took the cloth off my head and listened. When I felt fairly certain he was gone, I carefully opened the cupboard. I feared his return, or even worse, that he might still be in the house. Crying helplessly, I reached for the phone and dialed my dad’s office number, almost on instinct. His secretary answered the phone, and I had to compose myself enough to ask to speak to my father. When I heard his voice, I came unglued. “Somebody broke into the house and raped me,” I said. He told me to call the police and said he’d be right home. So I dialed 911 and told the woman who answered the phone that someone had broken into my house and raped me.

The next hour moved quickly. The police and my parents arrived within a few minutes of each other. The officers questioned me, talked to the neighbors, and inspected the locks on the house, garage, and gate. They concluded that the rapist parked around the corner, jumped the neighbor’s fence and our fence, and entered through our garage’s side door. The door between the garage and the family room was unlocked because I was doing laundry. Obviously the attacker had watched the house long enough to know there was only one female home that afternoon. During the next year, I learned seven other women had been attacked before me within a 30-mile radius. I heard the ninth victim died. To my knowledge, our attacker never was caught.

The police officer asked if our family ever considered owning a dog, explaining that’s the best deterrent to a home invasion. My heart sank because our beloved shepherd mix had died just three weeks earlier. We had a new dog by the end of the weekend, a Doberman/shepherd mix I named Angel.

The police officers then escorted my mom and me to the county rape crisis center. The rape clinic personnel knew I was coming and immediately led me to a private room where I was given a complete physical exam, including a pap smear to collect for evidence and a blood test for sexually transmitted diseases. They told me I was in shock, which explained my uncontrollable shakes and shivers. They asked me more questions and gave me literature on rape, emphasizing it wasn’t my fault. I also received antibiotics to prevent sexually transmitted diseases and was asked to come back in 30 days for a pregnancy test and follow-up blood tests for diseases. Thankfully none of the tests ever came back positive.

When I finally returned home, I took a hot shower to wash off the filth I felt was consuming me. I had my mother stand in the door because I was so frightened to be alone, even while showering. I feared being in the house by myself for many months.

That first night was quite fretful. I was too scared to turn off my bedroom light. I slept with my door open and my parents kept their door open across the hall, where my mom had stashed a large kitchen knife under the head of her bed. I couldn’t sleep. I kept reminding myself I was grateful to be alive, but I wondered how God could allow such awful things to happen to people. I wondered how I would move forward with my life. A few times I dozed off and dreamed someone was in the house, and I jolted out of bed. I wondered if I would ever sleep soundly again.

I couldn’t fathom sitting around the house for the next four days crying or feeling sorry for myself, so I went on my water-skiing trip. Being several hundred miles away from home offered a sense of security, but when I returned home I completely panicked as I approached the house. Arrangements were made for me to stay with family friends across town for a few weeks. I also saw a counselor, a regular procedure for victims treated at the rape crisis center.

While I was on my trip, my parents went door to door and told dozens of neighbors about what had happened. They also announced it in church. They were trying to alert the community that crime was happening in their upper-middle class neighborhood. So by the time I returned, everybody knew what had happened. I felt so embarrassed and ashamed.

I continued with my schooling and graduated a year and a half later, but I resigned my post on the editorial staff of the college newspaper. I was too fearful to make the mile walk to my car in the dark each evening. I didn’t even want the security personnel to escort me, since I was afraid of most everyone I didn’t know personally.

My pastor was great. He would meet me at my parents’ house after school (I was staying across town), walk into the house with me to get my new dog, and we’d take her to the park and talk. I attended church regularly, but I still was pursuing a solid relationship with God. My spiritual seeking continued and I frequently questioned, “Why, God?” But I also remember thanking him frequently for letting me live. I truly thought I was going to die that day, so I was grateful simply to still be alive.

During the next two years, I suffered miserably. I experienced the typical symptoms of grief and depression, and I had severe nightmares and insomnia. I didn’t feel like eating and got so skinny people accused me of being anorexic. I trembled and shook, was constantly in tears, and was desperately fearful to be alone. Former boyfriends and guy friends would come to visit and “babysit” me whenever my parents were out of the house. I still dated some, but I felt tainted and sure no one could ever love me.

In my years of grief, I was consoled by the story of Job in the Bible. His suffering and agony seemed similar to mine. Job struggled through the complete destruction of his home, his land, and the death of his children. Finally his body was so diseased and disfigured, he was unrecognizable by his friends. Yet in his suffering, Job didn’t curse God. Job remained steadfast, patient, and faithful to his Redeemer. Job became to me a model of faith, courage, and strength during my time of suffering. Through his story, I learned a few basic principles for overcoming grief: talk about it, allow plenty of time for healing (it took me more than 14 years to speak openly about my trauma), be honest with God and friends about how you feel, and maintain faith in God. In my years of searching for answers and hope, my meager faith grew. Finally, 10 years after the attack, I accepted Jesus as my Savior and embarked on a relationship with him that brought me the peace I so desperately needed.

From Job’s story, I also learned I could be honest with God. Job talked about his affliction, describing how hopeless he felt and how confused he was that this affliction had befallen him. I questioned God, “What did I do to deserve this?” I have since recognized we all live in a world raging with sin, and I’m not immune to its affects. Finally, Job showed me that in deep hopelessness and doom, there is hope in God. I never thought I would survive the physical and emotional scars of that terrible day, but God had a plan for my life: he allowed me to live.

A couple years ago I began to share my story one-on-one with a few women. Eventually I worked up the nerve to share about my attack in a Bible study group of seven women. It was a big step to speak openly about it. To my amazement, two women called me to share their hidden stories of being sexually abused as children. I realized that if sharing my story could help others heal, then maybe revealing this part of my life could be a good thing. In the past several years, I’ve shared my story with hundreds of women at Bible studies, church meetings, and conferences. Women from all backgrounds who have never shared their story before have told me about the rape or sexual abuse they’ve suffered. I’m convinced that when a sufferer can speak about her pain and tell her story, the healing process can begin. God has granted me peace over what happened, and he’s opened the door for me to share my story.

Today, one of the biggest supporters of my speaking ministry is my husband, Bill. When he asked me to marry him, he told me he accepted and loved me just as I was, and he assured me we would overcome the obstacles of my past together. Hearing that was another step forward in my healing process.

We now have three children, and I own my own business, which requires me to interview male and female clients in my office. I even stay home alone (with my dog). To this day I’m cautious of strangers, especially those near my home, and I’m concerned about my children’s safety. Though we still lock our doors and keep a watchful eye, I now know ultimately my family and I are in God’s hands.

Diane Hudson-Burns, a business owner and speaker, lives in Maryland. This article was originally published in 2002.