Should I think with my heart or my head?
Camerin Courtney 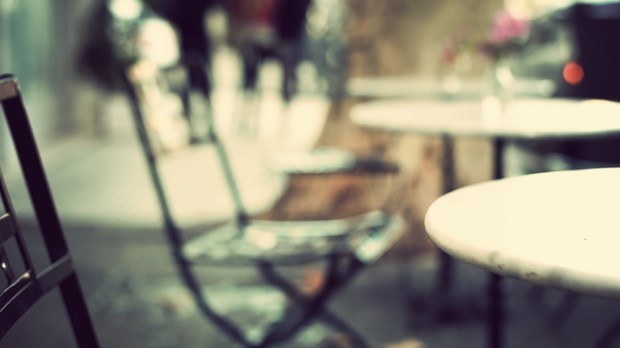 I didn't see it coming. At all.

Perhaps it's because I'd known George for a couple years before I started to notice a certain flutter when we talked, a desire to dress cuter when I knew I'd see him, a slight blush when he asked me to meet for coffee to discuss a project we were both working on. It was several years ago, so I don't quite remember the exact moment when I realized I was crushing on George. But I remember the resulting feeling of dread quite clearly.

Sure, George was a great man who shared my faith and my passion for cross–cultural ministry, a man whose intellect, integrity, and humility I really respected. But he was also very married.

I was surprised by my feelings for George … and appalled. As a Christian, I know married men are so not an option. One of the first things I usually try to notice when I first meet a guy is whether or not he's wearing a ring. It just helps me put our interactions in context. When there's a ring present, so are a certain set of boundaries. Because that's just been truth for me for as long as I can remember, my romantic feelings for George hit me out of the blue.

A flood of emotions accompanied this realization. Embarrassment. Guilt. Perplexity. And, I hate to admit, a bit of that delicious excitement when there's a new love interest. After having no one trip my trigger for so long, it was kind of fun finally to have someone to think about whenever I heard love songs or whenever I'd lie in bed at night and daydream about some possible future before drifting off to sleep. These thoughts came unbidden, but I didn't always chase them away as fast as I should have. The guilt they'd cause was always close–by. Into the darkness of my bedroom I'd confess my emotions aloud to God, and (sometimes reluctantly) ask him to steal them away.

Questions swirled in my head in those moments alone with my conflicting emotions. Was this just a harmless crush? Or was this the slow–burn beginning of an emotional (or even physical) affair—as those things always start with secret emotions in someone's mind? Should I run away from our common circles? Or would that draw too much attention to something that could ultimately be harmless—and that would leave me with less community? Was George sensing my feelings? Did he share any of them—and what was the better of the two possible answers to that question? Of all the guys in my life, why was this one attracting me? And why wasn't God answering my prayers and melting these ragingly inappropriate feelings?

Just after I recognized these feelings, it felt as though I ran into George practically everywhere I went. He was in the cereal aisle during my impromptu grocery store run. He was at the party of a friend I didn't even know he also knew—with his beautiful wife, of course. He was in the lobby of church one Sunday morning sharing an endearingly sweet moment with his toddler daughter as I fruitlessly scanned the lobby for any of my lunch buddies. I pondered whether or not to say hello and enjoy some of the conversation with him I savored so much, and finally opted just to let them have their sweet moment while I snuck away from church. Alone.

A few semi–tormenting weeks into this weird journey, I was talking with my fellow Christian singleton friend Abby. We were chatting about singleness issues when I suddenly blurted out, "Lately I've been battling the married crush."

It hung there between us for a long moment while I felt all the oxygen leave the room. It was relieving and terrifying to have this truth exist in someone else's presence. I braced myself for her reply.

Instead of the reproach I feared and knew I deserved, she looked at me incredulously and said, "Me too." I voiced the feeling of being betrayed by my own emotions, as well as all of my questions about why and how and what on earth to do. Abby nodded in agreement and understanding.

The details came before the names. Her married crush was a coworker. One who shared her love of tennis and cooking. One whose wife was "pregnant and brilliant," Abby said with resignation. She'd been sensing reciprocal feelings from the guy—as well as mutual avoidance.

Mine, I cautiously shared, was a church friend who ran in similar circles. After the details and the questions and the frustrations we confessed the names, which was risky because we knew each other's crushes. We were entrusting a lot to each other—and then carrying a lot for each other with this knowledge.

"I wonder if I'm attracted to married men partly because they're safe and unavailable," Abby thought aloud. I speculated that part of the appeal was because these guys had lived with someone of our gender for years.

Abby told me about a recent work function where she saw her crush with his wife. "I was struck with the notion that she got to him first," Abby said. "And then I wondered what she's brought to his life that's part of what I like about him. Would I still like him without her presence in his life?"

Abby and I parted with an agreement to pray for one another and to check in on one another in the weeks and months ahead. Just having someone who understood my conundrum was helpful.

I noticed a funny thing the next time I saw George. I didn't feel so alone and outnumbered by my feelings and George's presence. Somehow Abby was there with me asking the tough questions and bringing our shared values into the picture. Talking about the crush had taken away some of its power over me. And it did so each time we chatted about it during coffee–house get–togethers in the weeks that followed, asking tough accountability questions about our hearts and our heads.

Flopped on my bed one night after seeing George, I had it out with God again about the whole situation. I confessed, wondered aloud where George's single counterpart was, and asked for help in doing what I knew I needed to do: let him go. Picture his wife next to him whenever we talked. Not dress cuter when I knew I'd see him. Reread scriptural descriptions of the purposes and parameters of marriage and love, and theologians' words about the need for spiritual discipline. And let God's unending supply of love saturate the dry parts of me by showering my mind and soul with his biblical words of love for me.

In the following weeks and months, the appeal fizzled—because I let it and because I made it. I was inspired by Martin Luther's words: "I can't stop the birds from flying overhead, but I can keep them from building a nest in my hair." Smothered by God's truths, Abby's accountability, and my sometimes–reluctant efforts, the flames sputtered out. I grieved what I was giving up. It wasn't like I could dig deeper into a marriage or dating relationship to quell these ill–placed feelings. So denying them was denying romance and relational closeness in that season of my life altogether. It was sad—but necessary.

And yet I took what George—and God—had given me a glimpse of: a sense of what I want in a relationship. My feelings for George showed me how much I was drawn by a guy's intellect and wisdom. Armed with this knowledge, I'd be better able to spot the right guy—a single one—when he came along.

It was also another reminder always to be on guard against temptation, which often strikes when and where we least expect it. And a reminder that when opposite–gender attention is in short supply and romantic options seem non–existent and never to appear again, how important it is to dive deeper into God's unending, unfailing love.

With each step away from George, I grew stronger in my resolve—and felt less alone on this tough journey as God's presence with me became more and more apparent. I also felt him smiling on my acts of obedience, even when they were done begrudgingly. Somewhere deep inside I knew this was equipping me to handle the next George who crosses my path and tugs on my heart. Whether I'm single or married, I know there's likely to be one. And the wisdom I've gained with—and without—George has hopefully given me eyes to see him coming, and the strength to pass him by.