How I learned to embrace my "boring" spiritual journey.
Karen Langley 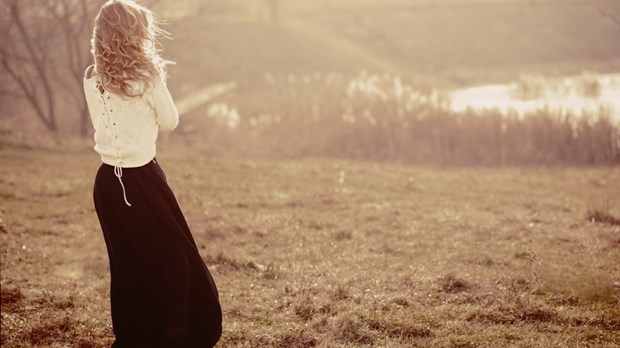 I sat motionless in my chair, listening to the speaker give his testimony. Joe's story held us spellbound. It was the kind that totally mesmerizes hundreds of people for an hour. The kind that tugs at heartstrings and sends silent tears trickling down cheeks throughout the auditorium. The kind that leads to repentance and faith rededications at the end of a service.

I left the chapel service amazed and inspired. And frustrated. God had so obviously worked in this man's life, and his powerful story touched hearts. Of course, his wasn't the first incredible testimony I'd heard. Growing up in the church, I listened to many men and women tell of God's grace in their life. The most powerful stories always involved pain and heartache—women who had abortions, men who battled pornography addictions, teens who escaped a life of drugs and alcohol. These Christian brothers and sisters told how they saw God's hand in the midst of suffering and sorrow. Their stories always inspired and encouraged me. They also made me resent my own dull testimony.

As a pastor's daughter, I grew up in a stable Christian home. At four years old, I prayed with my mother to ask Christ to be the Savior and Lord of my life. I can count on one hand the number of Sundays I missed church from infancy through high school. I never went through a rebellious period, hung around the bad crowd, had a shady boyfriend, or tried drugs or cigarettes. For a couple years during college, I struggled with doubt and cynicism about Christianity, but that eventually solidified my faith and grew my relationship with God.

How would that story inspire anything but a yawn? If only I had a little drama in my life. An accident or addiction. An adolescent run-in with the cops. I felt ridiculous wishing for bad things to happen, but I did just the same. I even asked God to cause something dramatic to happen in my life. Nothing too terrible, of course. Just enough to give my testimony some punch.

A few months after that chapel service, I had an opportunity to talk with Joe, the speaker who'd given his powerful testimony. I told him I sometimes felt guilty for having such an uneventful spiritual life while others suffered.

"Sometimes I pray something bad will happen to me," I confessed. I felt embarrassed telling my secret to someone I hardly knew, but I was desperate to sort out my feelings.

Joe's eyes expressed sadness, but his words came out strong and urgent: "I would never in a million years want anyone else to go through what I did." Joe pointed out that my "easy" life was a blessing from God, not something to regret. He was blunt with me: "Don't you dare waste God's blessings by wishing for harm. Use what God has given you."

I knew Joe was right. I asked God to forgive my ingratitude and foolishness. Still, I couldn't shake my feelings of guilt for having such an easy life compared to so many others. I felt bored and restless. I didn't see how my mostly pain-free life demonstrated God's mercy and grace. I needed to be rescued from something. Didn't I?

Several years later at a Christian writer's conference, the moderator invited all the attendees to share briefly about ourselves, including how we became a Christian. One young woman spoke familiar words.

"I grew up in a Christian home," she said. "For as long as I can remember, my parents loved the Lord and taught me to do the same."

"Praise God!" bellowed the moderator. "Thank the Lord for godly parents. What a testimony to God's grace!"

He commented as each person shared, but the stories of a Christian heritage elicited the loudest, most heartfelt praise. As I listened to this big, outspoken man praise God for demonstrating his grace in godly families, my heart felt as if it might burst. Sorrow, relief, and joy jumbled together, and understanding flooded over me.

God doesn't need heartbreak or tragedy to demonstrate his grace. He placed me in a loving, godly family and a solid church; he spared me from extensive pain; he guarded me and guided me in my choices. God rescued me before I made many lousy choices or faced tragedy.

I've probably heard Noah's story 100 times, but I recently read it with a new perspective. In a world so corrupt that God decided to wipe out everything and start over, one speck of goodness remained. Noah was "a righteous man, blameless among the people of his time" (Genesis 6:9). So God cut a deal with him: Build a big boat, and you'll survive this worldwide flood—"you and your sons and your wife and your sons' wives with you" (Genesis 6:18). What about Noah's sons and their wives? I wondered. What did they do to deserve a spot on the ark? Maybe they believed their father and/or God and faithfully swung hammers and hauled lumber. Or perhaps they thought old man Noah had lost his marbles and ducked their heads in embarrassment when they went to the marketplace. Either way, when the flood waters receded, Noah's kids were alive. Why? They had a righteous dad, and they obeyed him at least enough to enter the ark.

I can relate to Noah's kids. Devoted Christian parents showed me how to love God, and I obeyed them—sometimes out of a desire to do right, and sometimes because I was a bit of a goody-goody. As a result, God has showered my life with undeserved blessings. I've stopped wasting time and energy feeling guilty. Instead, I thank God for my Christian heritage and for all the blessings that come along with it.

I can still hear Joe's advice: "Use what God has given you." I'm discovering that the best way to say "Thanks, God" is by sharing what God has given me through service to others. My church offers free English classes to immigrants. Teaching these classes twice a week reminds me how fortunate I am to have had such wonderful educational opportunities. I recently started volunteering at an after-school program for "at-risk" kids, so I can love a group of third graders who don't receive the abundance of love I did at their age.

Every Christian has a different story, but the best part of anyone's story is always the same—that through Christ, she became a cherished daughter of the King. And that's amazing!