Patricia Raybon, author of I Told the Mountain to Move, reveals what she learned the hard way about the power of prayer.
Lisa Ann Cockrel 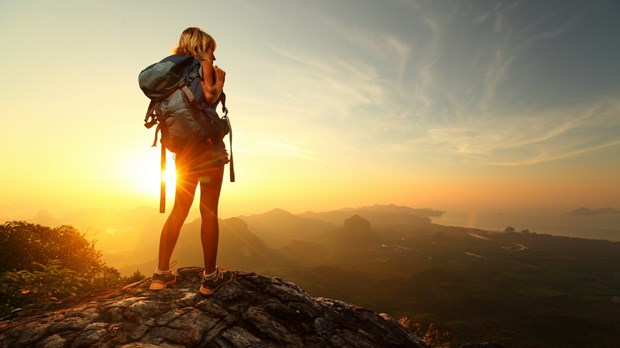 It's 9 p.m., and a busy hotel isn't the best place to conduct an interview. So Patricia Raybon has a simple idea: "Let's call it a day and try again later," she says. "We'll find a better time."

Patricia's learned a thing or two about the importance of timing. She knows waiting can be a good thing, even when it involves waiting for answers to prayer. But her wisdom on this subject is hard-earned; just a few years ago, at age 50, Patricia was at the end of her rope. A wife, mother to two adult daughters, journalism professor at the University of Colorado, and author of the celebrated memoir about forgiveness, My First White Friend, Patricia found herself fumbling spiritually. "In Matthew 17, Jesus says we can tell our mountain to move with even the smallest amount of faith. But my prayers weren't moving my mountain. And I didn't have just one mountain; I had a whole range," she says.

Her eldest daughter had announced she was pregnant out of wedlock. Her youngest daughter had donned a headscarf and converted to Islam. Patricia's mother, in her 80s, needed her care. Meanwhile, her marriage of 25 years was fraught with tension. And her prayers weren't changing any of it.

"I'd grown up in the church and had a relationship with Christ, but for the first time, I asked God to change me instead of my circumstances. I asked him to teach me how to pray," remembers Patricia. "That's when things got interesting."

She immersed herself in classic books on prayer—My Utmost for His Highest by Oswald Chambers, With Christ in the School of Prayer by Andrew Murray, Celebration of Discipline by Richard Foster, among others. "But what they all said was, Stop trying so hard to fix everything yourself. That in prayer, it's OK to take it slow and easy. Let God work. He knows our battles. But he wants us to pursue him more than we pursue his answers."

So Patricia began to pray to know God. Every morning, she started praising God's names, names she'd heard all her life but never stopped to think about: "Jehovah Jireh, my Provider! Jehovah Rapha, my Healer! Jehovah Nissi, my Banner in times of war!" Then something happened. "For the first time in my life I felt God listening. Suddenly, I realized this is prayer."

Then her husband, Dan, almost died.

"It dawned on me this wasn't the end of my story on prayer. This was just the first chapter," says Patricia. "My husband and my family needed me to love them. To pray for them. To discover the secrets of prayer."

In her fiercely candid 2005 memoir, I Told the Mountain to Move (Tyndale), Patricia set out to tell the story of this prayer journey. Recently retired, she speaks to groups across the country about prayer and about the practice of writing. Patricia talked to TCW about finding God in failure, the freedom of forgiveness, and the ways we can move mountains in our life.

You attended church all your life, yet you've said you never learned how to pray. What do you mean?

Even though I was a believer, I'd become a carnal Christian. For years I prayed with wrong motives—Grant me that job promotion! Or, Help us buy that house! But the Lord says he rewards those who seek him. The prayer experts say we pray not to get, but to know God. So real prayer is less talking, more listening to God; less asking, more dwelling with God, enjoying his amazing presence. Matthew 6:33 says it beautifully: "Seek first his kingdom and his righteousness, and all these things will be given to you as well." Somehow I'd never learned to first seek.

God-seeking prayer isn't an act; it's a lifestyle. It's about living for God's glory. Loving others and seeing what God is up to in the world. And when we do that, it changes our prayers. It's not me, me, me. It's about God.

There's that great story in Mark 10. The Zebedee brothers, James and John, ask Jesus for a favor: "Let one of us sit at your right and the other at your left in your glory." Jesus basically replies, "Wrong prayer, guys." Then here comes blind Bartimaeus a couple verses later. When Jesus asks what he wants, Bartimaeus says, "Rabbi, I want to see." I think that's what seeking prayer is all about. It's us asking to see the world as God sees it. When we know God's perspective, we know how to pray.

Do prayer chains and groups promote this personal work of seeing?

Praying with others teaches us to love. We have to listen, wait our turn, offer compassion, withhold judgment, show up on time. No wonder Jesus says in Matthew 18:20 that when two or three of us get together in his name, he'll be in our midst!

But I think the Lord's pleased with these efforts. And what he wants most is to be glorified by his creation. People who understand that can pray powerfully together. Even if God delays his answer, waiting together is better than waiting alone!

But what's the point of persistent prayer if God doesn't seem to answer?

Because, along the way, we change.

Recently, my best friend was praying for an old college buddy who was terminally ill. She even flew clear across country to pray over her beloved friend. A few weeks later, the college buddy died in a hospice and my friend was devastated—and angry at God. Why did he send her in faith if he wasn't going to answer? But as we talked, she recalled how grateful her friend was that she'd traveled so far to comfort her. My friend learned the healing was in her willingness to go and be a friend.

It's the process of prayer that refines us. We go out in faith, and God takes care of the outcome.

But aren't we supposed to ask God for the things we want?

Well, Jesus doesn't say that! He said in John 15:7, "If you remain in me and my words remain in you, ask whatever you wish, and it will be given to you." Prayer is being in process before God. It's keep on asking. Keep on seeking. Keep on knocking. And our transformation is what glorifies God.

Are you saying the outcome isn't important?

What's more important is to surrender to God. The other things? He'll add them, but in his way and in his time. This is trusting and paying attention. I've overlooked answers I wasn't expecting.

You're candid about your marriage being strained before Dan became ill. How did prayer heal him and your marriage?

It's funny, when I realized my husband could die from his illness, I suddenly understood how much I loved that man!

Talk about a wake-up call. I'm forever grateful he was healed from a complicated illness. But I had to learn to love him with God's love along the way. It was hard; I studied 1 Corinthians 13 backwards and forwards, up and down. And I prayed: Oh Lord! What is love? How does it look, feel, sound, act? Then one day I realized love is a lifestyle. It starts with loving God, then yourself and others as yourself. This is mountain-moving work. But the struggle and the lifestyle glorify God. Today our marriage is better than it's ever been, but that was made possible by first seeking God in prayer.

Did you feel responsible for your children straying from the faith?

Like many moms, I confused being in church with being in Christ. For my girls, that meant church every Sunday, youth activities, choir, VBS … the whole nine yards. I introduced them to organized activities under the roof of a church, not to Jesus. When you know him, you don't walk away from him. So, yes, I felt responsible.

What would you do differently?

Love them! I was a strict, inflexible parent. In hindsight, I'd love them like crazy. Then I'd make sure they understood why—because finally I know who love is: His name is Jesus. That's what praying in his name means—to walk in his character. A woman can change her entire household this way.

How do you pray for your daughters now?

Well, first I listen to God. Then I ask him to show me how to pray in this situation. I never prayed like that when they were younger. Mostly I prayed God would keep them safe and bless them in school—that sort of thing. Those are good prayers. But if I could go back and do it over again, I'd go for the power! I'd seek to know and follow Jesus so I could make him known to them.

While your eldest daughter has reaffirmed her Christian faith, your younger daughter is now a devout Muslim. How did you respond to her conversion?

With God's good grace. Her conversion to Islam has challenged, humbled, and even broken me. But God used it to help me admit I didn't know enough about him or my faith. When she left the church, we argued constantly about religion. In truth, I didn't know enough basic Christian theology to even argue for it. So I set out to learn. And the more I studied, the less I debated; the more I trusted, the more I loved. I don't have to arm wrestle my daughter back to Jesus. I love her—and let God handle the rest.

What's your advice for parents dealing with a prodigal child?

I'd say take that problem to the altar and leave it there—then stand back! Because the Lord will first change you. That's the spiritual answer.

The practical answer is to ask God to show you how to love her. I heard a preacher call this the "meantime," because an unresolved problem can feel "mean." So in this "meantime," I love my beloved daughter. Frankly, we have a closer relationship now than when she was attending church as a teen. She lives in Houston with her husband, and we talk on the phone all the time. We take vacations together. I listen when she talks. I'm not exhausted with sorrow and I don't preach. I'm trusting in God's love for her.

How did prayer help you come to terms with your failures—large and small?

Prayer helped me hear the Lord's forgiving voice. I stopped condemning myself. Broken, failed people are people God can redeem and use. The Bible's filled with them—David, Peter, Paul, Moses, even Eve! When we fail, the Lord offers another way to become better at being usable … but only after prayer. Oswald Chambers says it so perfectly: "Prayer doesn't equip us for greater works, prayer is the greater work."

To learn more about Patricia's books and speaking ministry, check out her website: www.patriciaraybon.com.