How I radically shifted my view of our relationship
Carolyn Arends 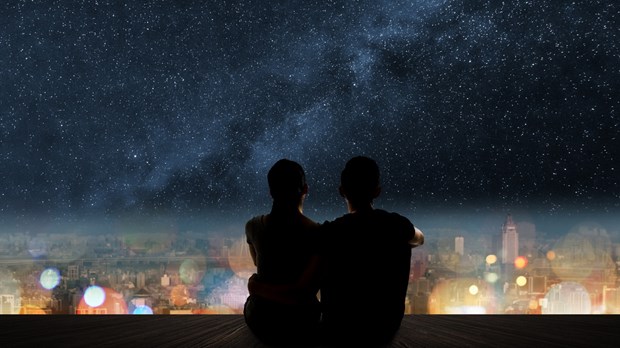 For the first several years of my marriage, I was fond of paraphrasing C.S. Lewis on the difference between romantic love and friendship. In The Four Loves, I'd tell whoever might (or might not) be interested, "Lewis points out that friends stand side by side and look out at the world, while lovers stand face-to-face and look at each other." I often cited this concept in support of date nights; there's nothing like candlelight and a little eye gazing to bolster a marriage.

But time, as the song says, goes by. Eventually, I found myself wondering just how many years of marital experience C.S. Lewis actually had.

Don't get me wrong, Lewis is still my literary hero. And my husband, Mark, still has highly gaze-able eyes. They're blue with gray flecks, or gray with blue, depending on his mood and the color of his T-shirt. When he's angry, his eyes turn cold; it's like the sun's been lost in cloud cover. But when he's content, his eyes are warm and alive, and I, to quote a hundred corny love poems, get happily lost in them.

Still, when two people are face-to-face for an extended period of time, they start to notice things. My husband, for example, has observed over the years that I'm never on time for anything, that I don't fold towels correctly, that I leave a trail of half-consumed Diet Pepsis in my wake, and that I'm incapable of backing the car into the garage in an appropriate fashion. (Three side-view mirrors have been sacrificed to date.) I, on the other hand, have come to realize that Mark never remembers to turn on his cell phone, that he keeps our bedroom at Icelandic temperatures, that he reloads dishes I've already placed in the dishwasher (according to his exacting specifications) when he thinks I'm not looking, and that he's unnaturally legalistic about backing the car into the garage. (Driving in nose-first works just fine, thank you, and not a single mirror need be lost.)

Every marriage has its quirks, of course. Two humans can only cohabitate for so long before weak spots and rough edges start to show. But add in a couple kids, stir in life's stresses and pressures, mix with some trauma and tragedy, glaze with the basic selfishness of human nature, and voilà—you've got a recipe for trouble.

A few years ago, Mark and I cooked up some trouble that no amount of eye gazing could fix. Neither of us intentionally sabotaged our marriage, but over-extended schedules, miscommunication, and conflicting goals gradually boiled over into estrangement and confusion. I cannot remember a more miserable time.

One of our problems was that I was traveling too much, performing concerts around North America.

Mark felt abandoned: Can't she see she's sacrificing the needs of our family for her ministry and career?

I felt unsupported: Doesn't he understand I'm doing everything humanly possible, burning the candle at both ends, in order to still be there for the family and live up to my spiritual calling and professional obligations?

The only thing we could agree on was that we weren't meeting each other's needs.

I found myself on a flight to Chicago for yet another concert, hunched in my seat, staring out the window, trying to hide my tears from my seatmates. Three hours earlier I'd raced out of the house (late as usual); Mark and I had exchanged a cold goodbye. I felt defensive and hopeless and very lonely. I knew something had to change. Mark, preferably.

I'd been carrying a book around in my travel bag for months—As For Me and My House by Walter Wangerin. A friend had recommended it to me as her favorite tome on marriage, and I kept meaning to read it. I wrestled it from beneath the seat in front of me and cracked open the cover, skeptical about the possibility of finding any real help in the pages. But by the time the plane landed, my understanding of marriage had begun to radically shift.

The idea I'll always remember from Wangerin's book was his suggestion that there are three entities in a marriage: the husband, the wife, and a new, holy creation—the marriage itself. Wangerin pointed out that as long as the focus is on whether each individual's needs are being met, the marriage will be filled with defensiveness and accusation. But if the focus is on what a couple can do to best serve the marriage, to deepen and widen it and help it flourish, then both partners can work unselfishly to that end.

Crammed into the second-to-last row of a 737, I began to see that our marriage wasn't just about Mark and Carolyn. God had invited us to work with him in creating something new and precious; our relationship was a being that needed care. We wouldn't think of ignoring the children God had entrusted to us. Why had it been okay to neglect the relationship he'd given us? I'd been focused on the kids, on ministry, on work, and I expected my marriage to support and sustain me through a busy time. I'd forgotten that a marriage, like all living things, needs nourishment to grow.

I came home to a distant husband and a chaotic house, and I wondered how I was going to put my paradigm shift into any useful practice. But I haltingly shared it with Mark, and I saw a flicker of something in his gray-blue eyes. I think it was hope.

It took a long time to rebuild what we'd let fall into disrepair. We had to stand, side by side, and look at our marriage as if it were a fixer-upper we were going to remodel. I began to put better boundaries between work and family; Mark worked to move from a position of guardedness back into trust. Slowly we became a team again, aiming for the same goals. And one day, 18 months after my Chicago flight, Mark murmured as we drifted off to sleep, "Hey. Things are good." And, reloaded dishwashers notwithstanding, they were.

But that's not the end of the story. In the intervening years, it's dawned on us that God calls us to look beyond ourselves not only to learn how we can serve our marriage, but also to discover how our marriage can serve the world. We're blessed in order to be a blessing; that's the way God's been running things since the days of Abraham and Sarah. Every good gift we're given—time, talents, resources—is meant to be passed on in some way. The gift of a good marriage is no exception.

So Mark and I have begun to ask some pulse-quickening questions: How is our marriage adding to the kingdom of God? Who is our marriage blessing? What are we part of that's bigger than ourselves?

This new vision of what our marriage is even for works itself out in a variety of ways. During football season, it means that I take a larger share of the domestic load so Mark can enhance his work as a high school counselor by being a volunteer coach. During my own touring season, our roles are reversed. But the best times are when we get to serve, in big and small ways, together.

A couple of spring breaks ago, Mark took a group of 11th grade students to Juarez, Mexico, to build a playground for children living in an incredibly impoverished area called The Kilometers. I came along, and we brought our young son and daughter as well. Conditions weren't the stuff of romantic get-aways—we slept on the floor of a rustic church basement, listening to the scurry of cockroaches and the whistle of desert winds through the holes in the walls. Fine dining was not in the cards; almost every person on the trip became violently ill throughout the 10 days we were there.

Still, there was an unmistakable sense of being a part of something holy. The high school students weren't church kids, but they met Mexican Christians who were deeply in love with Jesus, and they were intrigued. All of us wept for the indignities we saw, but we were thrilled to feel, in some small way, we were making a difference.

One night we worked on our job site long into the evening, spreading out newly poured concrete with rakes and shovels and dirty bare feet. Our backs ached, our eyes and skin stung from the constant assault of sand and wind. But a Mexican sunset is beautiful even in The Kilometers, and as pinks and oranges streaked the sky, I looked around for my husband. He was in a huddle of teenagers, all of them giddy with the power of doing something good. Our four-year-old was tugging on his sleeve, eager for him to meet her new Mexican friend. He was busy. But I managed to catch his blue-gray eyes, and for a long, romantic moment, he held my gaze. Then we looked out together, friends and lovers, at the work left to be done.

Copyright © 2008 by the author or Christianity Today/Today's Christian Woman magazine.