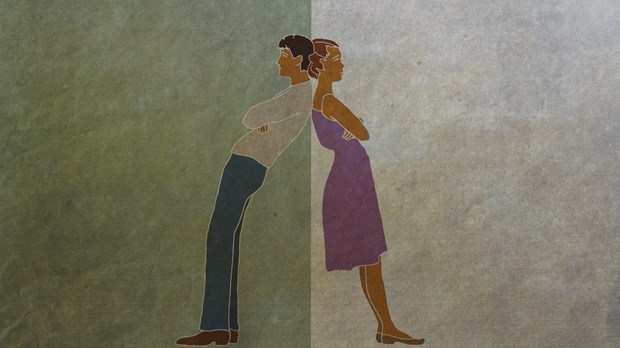 From the looks of things, Jenny* was the proverbial have-it-all-together woman. She was attractive, lived in a nice house, and didn't need to worry about money. She even had a caring husband, two healthy children, and was very "needed" at her church.

But as the marital therapy began, it did not take long to understand one of her husband's frustrations—Jenny was negative about almost everything, especially about everything her husband, Ron, did. Jenny expected that sooner or later, all aspects of her life would turn sour. The children would become ill, her husband would have an affair, their money would run out, and she knew she wasn't really attractive. Ron's brief attempts at encouragement were always met with an argument. Rarely a day passed that Ron didn't hear how his way of doing things was somehow wrong or disliked by Jenny.

Therapy for them had two challenges. The first was to help Jenny realize the reasons behind her behavior and how to make healthy changes. The second was to help Ron live with her in an understanding and yet maritally beneficial way. That second part cannot be overlooked. It is not uncommon for a negative, fault-finding spouse to avoid changing at the beginning of therapy, primarily because they don't want to. That being the case, the other spouse is often left wondering, "Is there anything I can do that can encourage them, help me, and ultimately improve our marriage?" And the answer is yes.

Why Do People Become Negative?

From a very early age, we learn to act or not act a certain way because a behavior benefits us. A baby cries and gets fed; a child brings home a good report card and gets praised; an adult works hard and gets promoted and a raise; and a person learns to see things from a negative vantage point because that is what their family did, it brought them attention, or it is where they find confidence or validate their lack of confidence. In short, spouses who are always finding fault with their mates do so out of what it gets them—good or bad. It is the way they feel most secure in life.

We could also have a long discussion as to why a person would marry someone who continually shows their disapproval, and the reasons are similar. For example, it is common for a woman who had a critical father to marry a man who will continue to be critical of her. First, it is what she knows, and, second, she is still trying to find the approval from a significant male who has eluded her all her life. All of this is to say that there is more to why we choose to marry someone than we may think.

Still, if you are in a situation where you have realized that the recurrent, abject criticism that exists in your marriage needs to change in order for you and your mate to experience the kind of marriage that God intends for you to have, then it is more important to discuss what you can do from here.

Many types of negative spouses abound, including the constant critic, the authority, the victim, the perfectionist, and the pessimist—none of which are easier than the others to deal with. Jenny would best be described as a pessimist. Almost every idea or suggestion gets countered by the "bad" that could possibly occur. The future is bleak. Any proposal to better their marriage was instantly met with a dozen reasons why it wouldn't work.

Reasons for Jenny's pessimism were easy to discover. As a child, she had been molested by a family member, the pet dog in whom she had found security ran away, and, when she was a teenager, her father had several affairs and left the family to live with a woman 15 years younger than he. To Jenny, this was life. Expecting the worst to occur was how she protected herself.

What helped Jenny start her battle against her pessimism was when she began to understand that her view of almost everything had been skewed by the events of her life. Ron's task was not to argue with her or name-call; rather, it was to point out lovingly how many of her negative predictions of the past have not come true and carefully encourage her to give new ideas a chance. Above all, Ron needed to reassure her constantly of his love and commitment to her. He needed to demonstrate daily the promise of Christ to us—that he would never forsake her. With time, the atmosphere of the marriage began to change.

Are there any guarantees that by doing some of the things Ron and Jenny did your mate will change? No. The only guarantee is that God loves you both despite your shortcomings. Which brings up the question, "What do you do if, despite your best efforts, your negative spouse remains negative?" It may not be the answer you want, but here it is: You do what you can to make the marriage better and trust God for the rest. And to provide hope, I can honestly say that everybody I've ever encountered who committed to loving their negative mate over the long haul without expectation of return, has received a positive return—even if that return was only a peace within themselves that comes from loving our mates as God intended.

Does that mean we should put up with any type of abusive behavior from a negative mate? Absolutely not. And if you find yourself in that situation, you should seek competent help. And let me stress again, I said commit to loving over the "long haul." It is common for someone to whom I've given this counsel to come storming into my office and declare that loving his mate unconditionally "did not work." "How long did you try it?" I'll ask. "For at least three days," he'll answer. "And she is still the same!" Sorry, but it takes a little longer than that—like months, even years, not days.

According to a study by the Mayo Clinic, people who see life from a more negative, pessimistic viewpoint, do not live as long as their more optimistic counterparts. As a matter of fact, their study found that those who are high on the pessimistic scale had a 19 percent greater risk of dying. Their lives are one-fifth shorter than those who take a more positive view of today—and tomorrow. The health benefits alone are a great motivation to change. Additionally, a change of attitude can certainly improve the health of your marriage as well as make it a more enjoyable experience for both. —T.G.

Remember, the only change you can control is what you do. You must ask, "How can I love my mate more consistently? How have my patterns of interaction allowed the behavior of my mate to continue? And how can I communicate to my spouse my concern for his well-being, the health of the marriage, and how his behavior is affecting me?"

Above all, as the apostle Paul wrote, we must love. All of these changes come about by patience, faith, and love. And if changes do not occur, we can still love. For years, Jenny had refused to change. And for years Ron had argued and tried to coerce change. As Ron began to learn that no matter what Jenny did, he could still love her, the first thing that actually changed was his attitude toward her. Ron knew he loved her, and his new patience showed it. And as his assurance that God loved him no matter what grew, Ron began to grow in his trust that change—of both he and Jenny—was up to God and not him.

In this case, Jenny did begin to change. As Ron's love became more secure and "safe" for Jenny, the need to protect herself by expecting the worse began to diminish. Combined with the cognitive adjustments she made by connecting past experiences with her present outlook, Jenny began to see life—albeit slowly at first —from a more positive perspective. They were even able to form a marital pact in which they agreed to help each other lovingly in their attempts to change.

Jenny needed patience, prayer, and love. And that is what your negative mate needs too.

Dr. Tim A. Gardner is author of Sacred Sex (WaterBrook) and Director of The Marriage Education and Policy Center at the Indiana Family Institute (an affiliate of Focus on the Family).

Copyright © 2000 by the author or Christianity Today/Marriage Partnership magazine.