We never even really liked each other. How would our marriage last?
Cindy Wilson, as told to Simon Presland 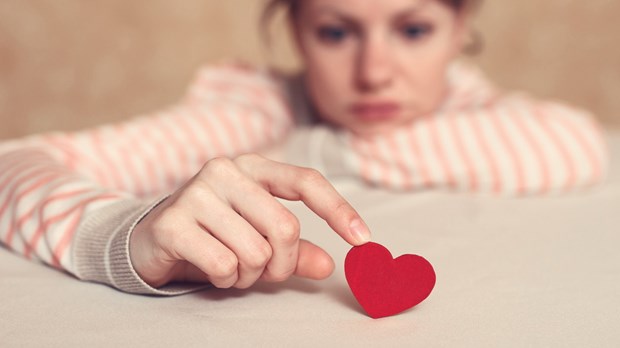 We never set out to be wrong for each other. When Pete* and I married, however, we couldn't have been more incompatible. We met at church. I found Pete attractive, and I admired his love for God. But I soon found that he could be loud and belligerent. I hated confrontation, so when Pete's anger flashed, I cringed, but said nothing.

Growing up, anger ruled my home. Dad harshly punished my siblings and me. I feared him, but learned to shut off my feelings. By focusing on others, I could bury my fears.

Pete's childhood had been just as painful. "I hated my parents for getting divorced and the countless relationships that followed," he said. "I was tossed between them, bounced into group homes, and dumped onto friends. I never felt loved."

In the ensuing months, I tried to help him work through his sorrow. But the closer I drew, the more attention he demanded. When I contemplated breaking up with him, I trembled at thoughts of his anger. After a year of dating, Pete asked me if I was happy. Finally, I found my way out. "No," I mumbled. He broke down in tears but finally let me go.

About a month later, a friend phoned me. Pete had been telling people that we'd eventually marry. "It's God's will," he said.

I'd been taught that if I didn't follow God's plans, I'd end up in hell. Had Pete really heard from God? Would God punish me for not going back to him? Guilt, fear, and confusion plagued me.

The memory of Pete's eyes began to haunt me, and I berated myself for increasing his anguish. He needs me, I thought. Besides, maybe God wants us together. Finally, I called him and soon we started dating again. When his anger arose, I overlooked it. He's had a rough past, I told myself. I can help him.

Six months later, Pete proposed marriage. "Why not," I said. But while making plans for October nuptials my heart kept crying, You're making a mistake! Don't do this! I argued with myself: "If I marry him, I can help heal his wounds."

I never talked about my feelings and doubts to anyone. I didn't even seriously pray about them. I guess I just accepted that Pete had heard from God.

On our wedding night, reality sank in as I sobbed in the hotel bathroom. What have I done? I thought. I don't love him—I don't even like him!

I couldn't share my thoughts with Pete; they'd crush him. In the ensuing days of our honeymoon, my anguish turned into depression. During the daytime I masked my feelings by joking around, trying to have fun. I kept him out late; just thinking about sex nauseated me. When he became amorous, I said we'd have sex in the morning. When the sun arose, I jumped out of bed before he awoke. As the days dragged on, he started to sulk, then grew livid.

"You hate me!" he seethed. "You're just like everyone else!" Speechless, I cowered under his tirade. By the end of the week, we couldn't even speak to each other.

We'd bought a house just before our wedding, and when we returned from our honeymoon, it was cold and empty. Just like my heart, I thought.

A Façade of Happiness

After Pete left for work the next day, I fled to my sister's house. Tears and remorse poured out. "What should I do?" I asked.

We prayed and hugged and cried together.

At home, Pete constantly spewed anger and bitterness. I retaliated by staying home during the day and leaving at night. A girlfriend needed help. Someone from church called. I'd leave supper and a note on the table.

For the next year, Pete and I kept up a façade of happiness when others were around. If anyone asked, "How are the newlyweds?" "Fine," was our pat answer. Our plastic smiles fooled family and friends. But I couldn't deceive God. During my devotional times, I'd beg: "Please, God, take my life. Maybe then Pete will find someone who can love him." I wasn't really suicidal. I just didn't think I could handle my emotional pain I felt any longer.

Meanwhile, Pete exploded at home over the slightest thing. Sometimes he'd apologize and want to make love. The next day he'd find something to belittle me about. Finally, I had enough and grabbed some clothes, then left for a friend's home. After a couple of weeks, my friend asked if I'd be willing to meet with Pete.

"Okay, but I don't know what good it will do," I told her. She phoned Pete and set up a meeting for the following week.

"Love isn't a feeling, although feelings follow love," she told us. "You both have some deep-rooted issues that you'd have to face no matter who you'd married. You have a tough decision to make. Either your covenant before God matters and you'll try to work things out, or you'll become another divorce statistic."

We decided to pray separately for a few days, then meet again. During this time, I read the biblical story of Esther. She was trapped in an unwanted marriage. I don't know if she ever learned to love King Xerxes, but she did what was right.

When our meeting night arrived, I'd made my decision. "Pete, I married you out of fear and selfishness, and I hate myself for doing that. However, I made a commitment before God. While I don't know the outcome, I'm willing to work on our relationship."

"I married you because I didn't think anyone else would want me," he replied. "I can't say I love you—I don't know what love is. But a divorce would be too painful." It wasn't much, but it was a start.

We agreed that I'd move back home and we'd find individual, then marital counseling. Finding the right counselors took time and money, but we were willing to sacrifice.

Over time, I learned that my need to rescue others stemmed from my childhood despair. I also realized something else: Jesus said to love our neighbors as ourselves, but how could I love my neighbor—and Pete was my neighbor—when I didn't love myself?

To help me do this, I devoured the Bible and personal growth books. I confided in trusted friends who helped me explore and heal my emotions through hours of prayer. Slowly, I realized my self-worth didn't depend on others.

Pete's personal revelations were just as great. He spent the next two years in counseling, dealing with the repercussions of his childhood neglect.

Desperate to be loved, Pete pursued relationships he knew subconsciously would fail, reinforcing his internal message: I'm unwanted and unlovable. The pain of rejection fueled his anger. For him, our marriage was an act of self-destruction.

During Pete's sessions, one lesson really struck home: he couldn't blame his past any longer, or shirk responsibility for his present actions. His counselor showed him that he was choosing to act out, and he could choose to control his emotions. As they worked through his issues, his anger abated.

Learning to accept myself helped me see Pete as God's child. I countered negative thoughts about him with Scripture, such as Philipians 4:8: "Whatever is true . . . whatever is right . . . whatever is admirable—if anything is excellent or praiseworthy—think about such things." I decided to learn how to love him. That meant throwing away my ideas of the perfect husband and concentrating on Pete's good traits. As I continued resolving my fears, he no longer intimidated me. Slowly, my feelings for him grew.

When I first reached out, Pete pulled away. If I snuggled up to him while watching TV, he looked at me suspiciously and moved to another chair. When I asked him to go for a walk, he'd find something to do in the garage. But if I became upset over something he'd done, he acted like a puppy dog wanting my attention and smothered me with affection. Our relationship turned into a push-pull affair, and we spent countless hours unraveling our tangled web of emotions.

Our healing process continued through counseling and prayer, and slowly we began to love each other. We spent the next two years with a counselor who taught us two foundational principles: the only one you can change is yourself, and marriage is spelled W-O-R-K.

Honest communication replaced harbored misconceptions. One time I was engrossed in my work, and Pete thought my silence meant I was angry with him. Instead of storming off, he asked me if anything was wrong. Connecting this way brought down barriers between us, leading to frank discussions about more sensitive issues. Little by little our mutual understanding deepened, and so did our intimacy.

By our tenth anniversary, our marriage was on firm ground. Over the next several years, when issues cropped up that we couldn't handle, we immediately sought help.

We've now been married for 20 years, and Pete and I have a deep, passionate love. This past fall, Pete surprised me with tickets for a cruise to celebrate our anniversary. I love how romantic he's become.

We also counsel others in troubled marriages. "You started with love," we tell them. "We had nothing. We chose to learn how to love each other and rebuilt our lives together. You can do the same, if you're willing."

I can honestly say, I am so glad we were willing.

Cindy Wilson is a pseudonym. Simon Presland, a freelance author, lives in Canada.