Happy wife, happy life? Or is his mom still queen of the castle?
Thorp Frances 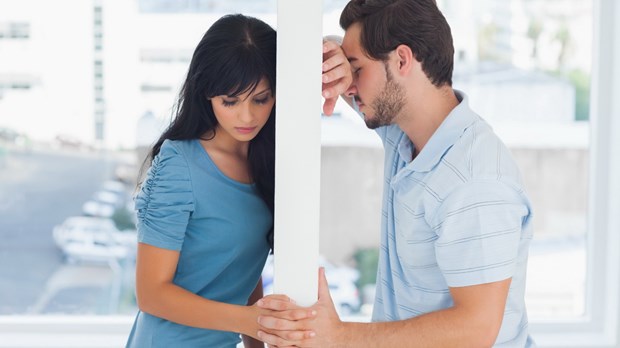 What do you mean, 'Pack for the drive home'? We're going to visit your parents every weekend?" my new bride exclaimed.

We'd just returned from our honeymoon when it began: the tug-of-war over my loyalties between my wife and my parents.

Before, I'd driven the eight-hour round trip every weekend in order to lead worship and the college group in my church. It was a demanding schedule—but one my father, the senior pastor and my boss, expected. And I'd always complied.

Now that I was married, Dad expected me to continue the drill, while Carrie* wanted to enjoy our first weekends together as a couple, setting up house, and delighting in the newness of it all. It was our first fight, and she lost.

As we neared each weekend, she'd withdraw and quietly endure the travel to my parents' home, where I'd slide back into the warm familiarity of my "son" role. Instead of opening a place for her in our family, my parents—and I—defaulted to our shared history, often leaving her out of conversations.

One evening during dinner at my parents' house, Carrie spoke up to be part of the discussion and asked Mom a question. Mom answered—to me! As if Carrie wasn't there.

After graduation from seminary, I was "promoted" to a full-time position on my father's staff. As my church commitments grew and Dad demanded more of my time, Carrie began to see him as her enemy and the cause of our growing separateness. The gulf between them hardened into predictable patterns of isolation. A polite hug. A few pleasantries. And then a quick dismissal.

Several years into our marriage, my father pulled a doozy. He volunteered me to teach at a worship conference—in Romania! While I was excited, I knew Carrie would have "issues" with the trip.

"Hi, honey," I beamed as I walked into the kitchen. Annie and Alley, my four- and two-year-old girls, made a mad rush for my kneecaps. Meanwhile, Carrie was juggling our two-month-old boy, Trey, on one hip while she stirred the bubbling pasta sauce.

Carrie forced a weary smile. "Hi. Can you hand me the colander?"

It was two baths and a nursing later that evening before I broached the topic of my intended trip. Fire flashed in her eyes. "Are you crazy? You're going to leave me for 10 days with three small children while you gallivant across the planet? I don't think so."

Carrie wouldn't budge this time. And I dreaded saying no to my father.

The following day I gave Dad the bad news: "The Romania trip isn't going to work for our family. It's too long for Carrie to deal with the kids alone."

With a surprised, hard look on his face, he pressed me to reconsider, "If you were being a strong and effective leader, Carrie would recognize how God's business requires personal sacrifice!"

Knowing Carrie wouldn't back down, I held the line. While I'd finally told my father no, there was no tangible victory for my marriage. And the tension between Carrie and me grew as I seethed inwardly toward her for making me take sides.

Five years into our marriage, the conflict came to a head. I was in a meeting when Carrie came by the church to drop off something. As she struggled to get the baby and our active two year old buckled into car seats, someone accidentally hit the power door lock and the kids were trapped inside the car, engine running.

Carrie pulled me out of the meeting, nearly hysterical. It eventually took a police officer and someone from the Ford dealership before the door could be forced open.

That night we had a no-holds-barred fight.

"You weren't there for me today," Carrie complained. "Just like every other time I need you."

"What are you talking about? I was there."

"You were there physically. But you're not on my side. And it makes me feel completely alone. I feel as if I'm a single mom! It was a battle just to get you out of that meeting! Why do you always choose your parents over me? Doesn't Genesis say that the man is supposed to leave his parents and cleave to his wife? You've never left them! And it's killing our marriage."

I was stunned. The weight of that truth slowly overwhelmed me with a mixture of horror and guilt.

We both grew quiet as we let her words hang in the air.

Finally, I had to admit it. "You're right," I said quietly. "I never did leave—not physically, not emotionally. I still process my entire world through the grid of what I believe Dad will think and say."

For the first time, I understood that my divided loyalties could cost me my marriage. Somehow, some way, things had to change.

As Carrie saw my genuine remorse, her heart softened. "So what do we do now?"

"I'm not sure," I said. "I guess we talk to my parents. We need to establish some boundaries."

The next evening we went to their home to explain our revelation. "I never left you guys in my heart," I said timidly. "Yet that's what God established in the Garden of Eden as a prerequisite for marriage."

My parents struggled to grasp our intentions. How could the family closeness they'd cultivated all my life be a bad thing?

In the months ahead we tried to set boundaries to protect our relationship. The physical ones were easy—limiting my nights out, cutting back on time spent with my parents. But because we still didn't know how to set clear emotional boundaries with my folks, little changed.

As our children grew, we began to look for a larger house to buy. "We want you in our neighborhood," my parents declared. "If you do that, we'll co-sign the note so you can get a bigger, nicer house."

The house was a dream home for Carrie, making it all the easier to entangle us deeper in their control.

"We need to talk," Carrie told me one evening. We were at a conference with my parents. I could tell she was upset, so to keep peace we left (without telling Mom and Dad) and went to a restaurant.

"I'm tired of your parents controlling our lives," Carrie said. "What would your life be like without your dad's influence?" My mind spun. The thought of breaking free was electrifying. But family loyalty pulled painfully, terrifyingly upon me.

"The truth is," Carrie said, "I won't live this way anymore. I love you, but you're still so connected to your parents that I feel as though I'm married to three people. You have to make a break, or I'm not sure we'll have a marriage anymore."

I didn't know what to say. Although we'd had this discussion many times, nothing ever changed. Now I was afraid she was going to make things change. Would she leave me? Had it come to that?

Finally, she said, "I've thought a lot about this. If this marriage means anything to you, then we need some serious time away. I'm not talking about a week's vacation. I'm talking about something more extreme. I think we should move to a different city, maybe even a different state."

I looked across the table at my wife—this woman who'd put up with ten years of taking second place to my parents. I knew this would crush my family. But I also knew we were desperate. Was my parents' approval really worth the loss of my wife?

Carrie was right. We needed an extreme change. We decided to take a year-long sabbatical out West.

Now I had to break the news to Mom and Dad.

"I don't understand why you have to leave," said my mother, starting to cry.

They fought our intentions to leave with every resource they had. Dad took me off the board of a family business, cutting off part of our financial flow. He marshaled the pastoral staff to pressure me to change my mind. A small severance package initially offered was later revoked.

But miraculously, we sold our house for full price without even placing it on the market. The money we made paid for our sabbatical.

Those first months in Colorado were the hardest and most rewarding of our lives. It became our full-time job to pray, read, talk, journal, cry, and heal. Because we knew no one else in our new community, we were completely dependent on God and each other, undistracted by work and busyness.

"I know how badly I've hurt you," I confessed when we'd been there a few weeks.

"I hope you can forgive me. I promise that from now on you'll be second only to God in my life."

"I want to believe that, but it's hard for me to trust you," Carrie admitted tearfully. "For years I couldn't count on you to back me up. When I think about the way you treated me, I get so angry."

We still had arguments and tensions. But one evening, after we'd been in Colorado four months, Carrie approached me.

"While I was praying today," she said, "I felt God tell me to forgive you and release my pain. When I finally said 'yes' to God, I felt this unexplainable purging. I want you to know I forgive you completely."

From that point, it felt as though we were starting our marriage afresh. We began to dream together, to laugh, to be honest, and to grow together intimately and spiritually. We became friends.

We eventually returned to Virginia (though not to the same town or church) very different people. Our lives are slower, more deliberate. We spend more time in prayer and listening than in planning and doing. Intimacy is our priority, with God and each other. And at the heart of it all: an unshakable pursuit of becoming "one flesh." Neither of us will make a decision until we reach agreement. We are finally becoming a team.

We still have bumps in the road. At times I catch myself drifting toward old patterns with my parents, but the corrections are easier. It's still awkward when we visit my parents' home, and Carrie often feels on the outside looking in. But because we're together, it's not so bad any more.

I'm not sure my relationship with my parents will ever be what it was before; in truth, I'm determined that it won't be. Instead, Carrie and I will go only as deep and far with them as we're able to go together.

In the meantime, Carrie now knows my loyalty belongs securely to her, and that's like a comforting, warm blanket over us both.

* Names and locations have been changed.

Thorp Frances is a pseudonym.