What do you do when you discover your husband has been seeing another woman? Read how one couple found healing for their hurting marriage
Elizabeth Walker 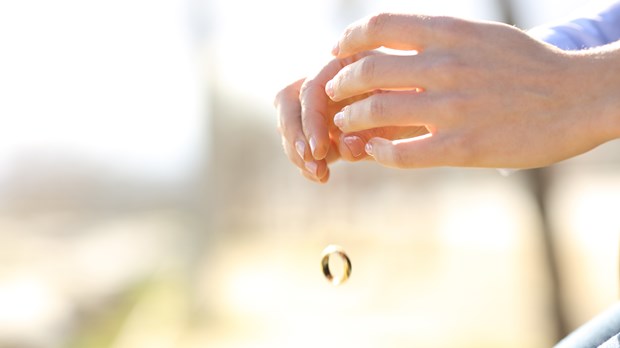 Tortured. I'd been barraged with thoughts of another man from our church. I prayed about it—with no reprieve. I tried not to think of him, but the thoughts wormed their way into my obsessed brain. After an internally trying month, I called my best friend who urged me to tell my husband, Colin.* But I hesitated. What if he rejects me or never trusts me again? I thought.

Finally, that night I mustered a scrap of courage and said, "I have feelings for another man."

Once the words left my tongue, I knew I was free.

Colin responded with uncanny grace. Then he hesitatingly said, "There was someone else for me, too." I knew immediately to whom he was referring. "Your former secretary, Gloria?" I asked.

And just like that it was out of the bag. No longer tortured with thoughts of another man, now I fretted about Colin's ambiguous admission. But I didn't want to know any details. Perhaps it was my relief at his prompt forgiveness of me, that if I pushed the issue, he'd withdraw it. Perhaps it was my insecurity that caused me to pretend all was well. Whatever the reason, I didn't ask him what had happened between them.

Winter turned to spring and the subject of Gloria remained unplowed.

Then one day six months later, Colin phoned me from work. We'd just spent a fabulous weekend at a marriage conference, and I assumed he was calling to tell me he loved me. "Elizabeth" he said. "I got a card today—from Gloria."

"She enclosed a self-addressed stamped envelope and wants me to write back."

"I don't understand. Why would she do that?" Even as I asked, I realized there was more to this relationship than I'd let myself believe. My stomach knotted. "Did you kiss her?"

I threw the phone to the ground.

Within minutes Colin was home, shaky. I wanted to scream, to hit him, to run away. I called my friend again and pled with her, "Please tell me to stay. I don't know what to do."

"I can't make that decision for you, Elizabeth. I'll pray for you, but you have to take this to God." I knew she was right, but first I needed to interrogate Colin before I could even think straight. After recounting everything, he broke down and wept. Although the affair hadn't been fully sexual, the physical contact that did occur sickened me.

"How could you kiss another woman? How could you woo her in such a way that she said she loved you?" I yelled.

Colin's only reply came in stilted "I'm so sorrys" punctuated by head-in-hands sobbing.

I just kept thinking, What kind of man did I marry? How can I ever trust him when he's deceived me for months?

Within the next few days, I talked to a counselor friend who advised me to vent my emotions and ask every question; she cautioned that if we stuffed it all now, we'd have to revisit it later. Not wanting to ever revisit this, Colin and I spent blurry-eyed weeks reconstructing the affair. I yelled. I sat quietly in dark rooms. I prayed. I contemplated walking out the door and never returning. But every time I considered that, I'd look at our children, and their innocence restrained me. I grew up in a home of three divorces, all of which dealt debilitating blows to me, so I determined not to do that to our kids. But Colin was sure I'd leave—every time I went to the grocery store alone, he'd watch the clock and wonder, Will she come back this time?

Surprisingly, during those tortuous weeks, I was drawn to him. For the first time in our marriage, I knew my husband was fully open and truthful. I saw the real Colin, the Colin who loved Jesus, the Colin I'd prayed for. His vulnerability and repentance was something I had rare glimpses of in the past, but now was seeing the full picture, unadorned and raw. He stammered, "Even if you never touch me again, I won't leave you. I'm here. I'll wait for you."

The affair had started three years earlier with hot, buried anger. We had one child then and had discussed having another, but hadn't yet made the decision. One night we left caution to the wind, and I knew I was ovulating. When I got pregnant, Colin felt as if I'd tricked him and became filled with contempt.

Instead of talking it out, Colin let his resentment fester. He plunged into his job, which at times bordered on obsession. He worked long hours, often volunteering for overtime. I became demandingly needy and used guilt with abandon. In bed, I'd try to hold him, but he'd elbow me and roll over. I asked him what was wrong, but he refused to respond. Eventually I gave up. I discovered my husband wasn't going to fill my needs, so I immersed myself in prayer and a ladies' Bible study. Despite that realization, I still tried to change him in subtle ways, even asking other men in our church to talk to him.

His relationship with Gloria began innocently enough. They talked easily and their friendship developed into romance. They went out of their way to see each other. He left for work early to see her at her home. At work, they flirted, stealing kisses when no one was looking. They had private lunches together. She called him at home when I was at Bible study.

During that time, I watched helplessly as our marriage crumbled and suspected something was happening with Gloria. But when I'd bring her up in conversation, he'd adamantly tear her down, saying she was stupid and ugly. Since he was so negative about her, I surmised that his indifference toward me must be his obsession with his job. I believed him and prayed for Gloria. I even asked Colin to invite her to church because I knew she didn't know Christ.

And I continued to pray for our marriage.

Then about four months into the affair, Gloria mentioned to Colin, "My friend told me I'm going to be a good stepmother!" That jarred him. Soon after, he had a dream in which our children asked him, "Why did you leave us, Daddy?" This "woke him up" and he ended the relationship. But since he worked in such close proximity to Gloria, he endured her angry glares and caustic notes—such as a post-it that read, "How can you look at yourself in the mirror?"—for another year.

At the same time, God had been urging me to confront a close friend about some gossip she'd been spreading. She wasn't an easy person to confront, so I turned to my husband in vulnerability and asked for his prayers. When he prayed for me, he felt God say, You need to be there for her.

Of all the paradoxes in life, I think the greatest one is this: When I tried to change my husband by nagging and manipulating him, I failed. But when I stopped and concentrated on what God wanted me to do, God used that to bring back my husband. Later Colin told me that seeing my friend badger me after I confronted her illuminated his sin and made him sorry. Yet, he didn't see the need to confess his "affair" because he felt it was old news, a box he didn't want to open.

Soon after that, Colin landed another job—one that took us out of state and gave us a fresh start. Then a year later I received Colin's phone call.

After weeks of incessant conversation about the affair, I knew I had a choice: To reject and flee, or to forgive and embrace. I've lived with bitterness from my past, and I knew I didn't want to become cold-hearted and distant toward Colin. I didn't want our marriage to go down the same craggy road, this time with me confessing the indiscretion.

While I knew I needed to forgive him, the "how" of it eluded me—until one night, when I made a small, willful choice to touch Colin's hand. Unexpectedly, I felt as if Jesus was enabling me to forgive him. There are still consequences to Colin's actions, especially emotionally, so I have to continue to choose to reach out to him.

That phone call was three years ago. Now our marriage isn't perfect, but it's revolutionized. We've built affair-proofing safeguards into our relationship. Colin never compliments a woman, and neither of us do things alone with members of the opposite sex. We speak frankly about our struggles and keep short accounts between us. Colin's a new man, unfettered by closeted skeletons. We both revisit the dark time in our marriage, he in sometimes-overwhelming regret, and me in issues of trust.

Tortured no longer, God used the timid confession of my own sin to start us back on the rocky path toward completeness. We've realized it's God's goodness that enabled us to be excruciatingly honest, wrapped in his outrageous forgiveness that's brought us through these dark times. Looking back, we can only grab hands more tightly and whisper our praises to him.

*Names changed to protect identities. Elizabeth Walker is a pseudonym.

2002 by the author or Christianity Today/Marriage Partnership magazine.