20 tips and tricks to improve your time in the bedroom.
By TCW Editorial Staff 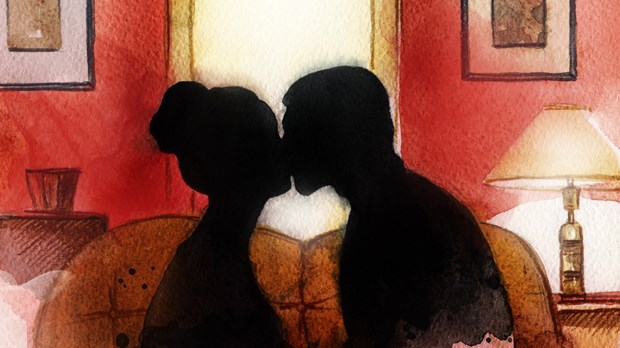 It's funny—a wife will put great effort and planning into meal preparation, but we think sex should be spontaneous. It's as if you were to go into the kitchen blindfolded and start taking things off the shelf and say, "Okay, we're going to have a spontaneous meal." It doesn't work that way. You have to plan for it, set an attitude for it.

The same is true of sex, but we don't do it. We think that, without energy or planning, we can get into bed when we're the most tired and have wonderfully fulfilled sex. If we want wonderful sex, we have to plan for it—and then communicate to our spouse what we think is wonderful.

We need to be careful we aren't always putting something else ahead of sex: Nightline, paying the bills, getting our child her third drink of water. It's too easy to think, Oh, well, there's always tomorrow. Sometimes we need to heed the feelings-follow-actions dictum and decide to have sex.

As a man ages he will require direct penile stiumation to get an erection, rather than responding to visual stimuli or thought stimulus. This may actually enhance lovemaking for the couple, because the man and the woman will become more similar in their arousal responses.

Expressing positive messages during sex enhances the experience for both spouses. In contrast, criticism and sexual arousal just don't mix. When we're aroused, we are open and vulnerable. So avoid making negative comment about your husband's approach while the two of you are making love.

If there are times when you feel you must take "corrective action" during sex, state your desires positively. For example, instead of saying, "You're pressing too hard," try saying, "A lighter, whispery touch would feel wonderful."

Consider the importance of nonverbal communication during your sexual times together. Once you've taught each other what is most effective and enjoyable for each of you, then you can incorporate that knowledge into your lovemaking by using nonverbal signals. You can lovingly move each other's hands to the place where your body hungers touch. You can move your own body to get the stimulation you desire. You can also decide to use prearranged signals to let each other know when some activity has become negative, or when some other touching would be more positive.

The myth that simultaneous orgasm is the epitome of sexual fulfillment is based on a number of false assumptions. First, it assumes that two people get aroused and then respond at the same pace. That is highly unlikely. Second, it assumes that goal-oriented sex is more fulfilling than pleasure-oriented sex. On the contrary, goal-oriented sex can interfere with fulfillment by introducing demand, anxiety, and often a feeling of failure, all of which hinder the body's natural response mechanism.

Keep kissing, passionately, every day. Kissing is the barometer of the state of your sexual relationship.

Sometimes I wonder if women really understand how intense the male sex drive is or how intrinsic a man's sexual fulfillment is to his self-acceptance. Remember men and women are different. If our wives had our testosterone levels, they'd be a lot more interested in sex. Of course they'd also have beards and hair on their chests. It could also cause liver damage—so don't slip testosterone into your wife's coffee.

Sleep-deprived spouses are not sexy, so before you can revitalize your love life you'll need to get some rest. Take a nap. Go to bed tonight when you get the kids to sleep. We actually have advised parents to have a sleep date. Get away for 24 hours, but spend the first part of it sleeping. Until you overcome some of your sleep deprivation, you won't be alert enough to concentrate on loving each other.

In marriage a couple may do anything in their sexual play that meets five specific criteria: (1) It's just the two of you. (2) You allow mutual respect and agreement to guide your choices of sexual play. (3) It causes no pain physically, emotionally, or spiritually. (4) You keep the focus on your relationship. When having sexual release becomes an addiction driven to levels of compulsive behavior, replacing the connection to your spouse with various stimuli that are essentially fantasy based, you rob your marriage of the most crucial part of intimacy—the blend of relational and sexual connectedness. (5) It doesn't always take the place of genital union.

How often is normal?

It's as if there's some grand scale of "normalcy" that everyone wants to fit in. Just because you don't have the same libido as your wife's friends' husbands doesn't indicate an "abnormality." This isn't a competition. There's no normal frequency of intercourse. It's whatever is right for you as a couple.

Men can become aroused in 2 to 3 minutes (and sometimes 30 seconds!)—but women take 10 times a long. That's 20 to 30 minutes to become as aroused as her man. Marriage won't turn a Crock-Pot into a microwave! Remember, the first description of love in 1 Corinthians 13 is, "Love is patient."

Become a student of your spouse's sexual zones. A woman has more erogenous zones than just her breasts and vagina. Explore with her, and discover where she's most responsive. Kiss, stroke, or caress each body part. Ask, "How does this feel? Does it make you tingle? What would make you feel even more tingly—if I caressed less or more?" Remember that although it's good to work toward climax, the journey is pretty unbelievable too.

So often couples feel the pressure to have "perfect" sex—complete with earthquake, fireworks, and multiple orgasms. Not every time you have sex will be a "bell ringer." And that's okay, because you're both connecting. Sometimes sex will be a quickie to meet the need of the moment. Sometimes it will be functional sex, or just because sex, when you think, I'm not in the mood, but my spouse needs me right now. Sometimes it may be comfort sex, when life has brought devastation and the only comfort and security is to be found in the arms of your spouse as a lover. You'll be ahead when you understand that the different kinds of sex point to the ultimate reason for sex: the relationship. The goal is not whether you end with a climax. The goal is that you're connecting as a couple.

What if you started to say, "Why not" to your spouse? Let's say your husband calls you and announces, "I'll meet you at home; we'll enjoy some lunch—and each other." Instead of lamenting the lost opportunity to run an errand, respond, "Why not?" Or when your wife e-mails you and announces, "The kids are going to be at sports practice for two hours. If you come home early, I'll make it worth your while," don't think of that backlog of paperwork on your desk. Respond, "Why not?"

Every couple except maybe one or two in the entire universe will have sexual problems at some point in their marriage. Anyone who tells you otherwise is misleading you. Every man is going to suffer from three major issues at some point: impotence, premature ejaculation, and delayed ejaculation. The good news is there are ways to work through those, so don't spend so much time fretting over them.

Initiating sex isn't the only way to express sexual desire

Most of us typically think of sexual desire as a hunger for sex—often with sexual thoughts or fantasies—that prompts us to initiate sex.

It turns out, however, that most women experience a receptive type of sexual desire. For many women desire is "triggered" by thoughts and emotions arising during sexual excitement, not before. So when a husband becomes frustrated because he wants his wife to pursue him sexually and he believes that she has no interest in sex because she doesn't do that, he's actually not giving her enough credit! Most women will respond positively to sexual advances—they just don't initiate them because that's not the way they were designed. By recognizing that most men are proactive with sex and most women are reactive, and then by accepting and respecting those differences, we can allow a woman's type of sexual desire to "count."

We have to fight against taking our sexual responsibilities for granted. On the day we marry, we gain a monopoly. Our spouse commits to have sexual relations with no one else. Regardless of whether we act thoughtfully, creatively, or selfishly in bed, they receive only what we provide. Without any competitions, some of us, quite frankly, simply stop making an effort. Do I want to reward my wife's commitment to me, or do I want to make her regret it? Do I want to bless her, or take her for granted? Do I want to be a generous, enthusiastic lover, or a miser reluctantly doling out occasional "favors"? When the Bible tells us in Hebrews 13:4 to keep the marriage bed "pure," the application goes far beyond avoiding physical acts of immorality to include inner virtue.