7 ways to get real without dishonoring your spouse
Caryn Rivadeneira 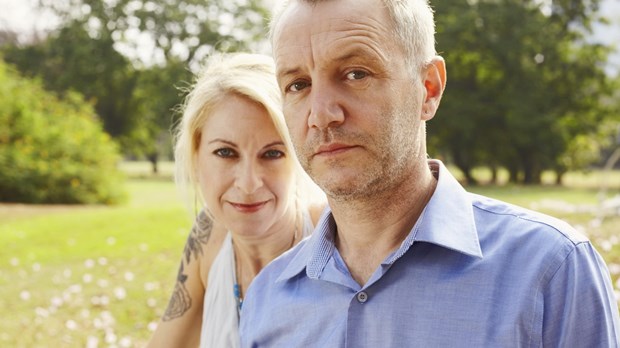 Last fall I gave my husband an early draft of a marriage article I was working on. After reading it, he said, "Good article. But we seem so happy." I laughed out loud; I knew exactly what he meant.

Truth was, when I was working on that article, we were going through what one might call a bad patch, a negative rut, a rough spell, an icky time, or you know, the throes of a real marriage! Brought on by the combination of little kids, little sleep, little time, and a whole lot of stress and work, we'd spent the better part of that summer snipping and snapping and just generally being disagreeable with—and unpleasant to—each other.

So it came as a shock to my husband to read about himself in such kind, loving language. Not that he didn't appreciate it. But he did wonder if it was right, my perpetuating this image of yet another tra-la-la, happily married Christian couple, when that wasn't necessarily the case, at least not as I wrote it.

While I would've stopped short of calling us unhappily married, let's just say when I heard about another young couple from our church who were splitting up during that time, my reaction wasn't the normal, "How could that happen?" Although it broke my heart and I disagreed with their decision to dissolve their marriage, I understood. Marriage is tough. Even for good Christian couples. Especially for good Christian couples.

Because on top of the usual rigmarole of dealing with life, negotiating relationships, trying to please, getting over hurts, juggling schedules, and managing expectations, Christians have this added burden of "image," right? If our marriages aren't in the right places, not only do we stink at being husbands or wives, we stink at being Christians as well! When Christian marriages flounder or fail, our entire faith is questioned.

Of course, this is ridiculous. Not to say that our "walk" with God is never an issue (we struggle in marriage just like in everything else because we're sinners after all!), but a quick glance at some biblical marriages and you can see that plenty of faithful people had plenty of problems in their marriage or (ahem) marriages.

So if "righteous" people of the Bible, people whom we know God loved and blessed, had less-than-stellar marriages, why do we feel the need to pretend, to perpetuate the image of the happy-all-the-time marriage? Why must we stifle the rough parts—while we're going through them? Why is it so difficult—or so wrong—to say, "I'm committed, but right now it's tough and heading for those hills doesn't sound half-bad"?

I can't help but think this reality-shot would go a long way in ministering to others because we'd show a picture of what working at a marriage and honoring vows looks like.

Of course, the biggest danger of unmasking your marriage is falling into trash-talking your marriage. That never helps anyone. So how can we be real without dishonoring our spouses and ruining their reputations? I've got a few ideas that may work:

Stop trying to look perfect. I don't mean you should carry your argument out of the car and into the restaurant where the rest of us are trying to enjoy a nice meal. What I mean is that while kind smiles and loving touches are always called for even when you're angry or hurt or struggling, the excessive fakeness and the energy expended trying to look and play a perfect part help no one.

I remember being at a church event with my husband years ago. A man gave a lengthy presentation. When he got back to his seat, I noticed that his wife (sitting next to him) didn't even look at him, let alone give a "good job" smile or pat. He actually scooted his chair away from her a bit.

Oooh. Chilly, I thought. What's happening there? But I knew their marriage was stable enough for them to be ticked at each other in public.

And when I saw them again a few weeks later at church—and they were smiling and laughing with each other—it warmed me right up. Their body language told the truth about where they were in their relationship, and frankly, it was refreshing.

Be honest about your marriage, but keep it about you. While it's fair to share with others that you're going through a rough spell, it's not fair—or right—to list all the ways your spouse messes things up. Take ownership of your role in the struggle.

A friend once confided in me about a nasty argument she and her husband had.

Don't spill secrets. Taking off the mask and revealing that you don't have the picture-perfect marriage doesn't mean every part of family life is fair game. In fact, most of it is off limits. Your spouse and your kids all have a right to privacy. If they want to open up about something or if they give you permission to share, that's one thing, but still be careful.

For instance, I know a woman whose husband has a nonexistent libido—and she walks around making comments about it to anyone who will listen. Obviously, she's taken off the mask of her marriage, but TMI (too much information)! What she's doing is in no way building her marriage or respect for her husband—or his respect for her.

Don't gossip about other people's marriages. Gossiping reinforces that the other couple has it wrong and we have it all right. Make marriage—and weaknesses within it—safe for people. Help create a culture of real marriages by not talking about those who become vulnerable. If someone starts to tell you something about somebody else's marriage, stop them. Though it may feel awkward, just say, "We all have our issues. If they want me to know theirs, I'm sure they'll tell me." I learned this one the hard way when my parents' marriage fell apart after 35 years. While I used to think it perfectly within bounds to talk about other people's broken-down marriages behind closed doors or in prayer circles, when my family became the object of this talk, I realized how hurtful it was.

It hurts to know that people who are supposed to love and support you might be analyzing, criticizing, and spreading unknowns about your loved ones. There's a fine line between gossip and concern, of course, so if you're wondering where the line is, apply that old wisdom: "If you're neither part of the problem nor the solution, it's gossip."

Add some distance. If you're in the middle of major ugliness and can't be real without being nasty, go to one or two trusted people for prayer and support, but don't go public until you've gained space, time, and perspective. Don't be hasty in taking off the mask if it's going to hurt the ones you love—or at least promised to love.

I've talked or written about marriage, when frankly, some wounds were still raw and my attitude was still sharp. If I had tried talking—or writing—about our struggles then, all the other rules would've gotten thrown out the window. As things start to cool down and you gain perspective, the honesty will be encouraging and not degrading.

Take your little gripes to God. Taking off the mask doesn't mean becoming a public complainer about every little thing that's wrong with your marriage—or your spouse. A good way to keep those things from driving you insane is to complain to God about them. A word to the wise: Instead of asking God to remove the things that bother you, ask him to change your attitude about them. God seems to answer those prayers quicker.

I've found the best place to pray those prayers: in the shower. If I'm annoyed by my husband, I silently (and this is key since often I've got a young child or two lingering outside my shower door!) "converse" with God. I talk it out—everything I'm bothered by—often even throwing in a "Can you believe that?" And then I end it with these words: "But help me love him and be a blessing to him today." Some days go better than others—not because God doesn't step in, mind you, but simply because some days I'm better at following God's step than others.

Keep sight of the positive. Taking off a mask doesn't mean there's only ugly underneath. Pretty people wear masks, too, you know. Same with marriage. Even the ugliest relationships have some beauty here and there, so make sure you let people see that. More important, let people see that just as your troubles are real, so are your commitment to each other and your hope for a brighter future together. This should be the hallmark of a Christian marriage.

For the record, I love my husband. I love how smart he is, how well he plays with the kids, how he thinks out of the box, how he loves a good conversation, and how he supports me and my crazy dreams. Sometimes these things get lost under the rush of our lives, but in the moments when he and I sit and dream and share about us, I remember what brought us together in the first place and why I love the idea of our future.

Back in those months when my husband and I were less than cheery with each other, I remember thinking, So this is why we take vows to stay together. (I confess, this wasn't the first time I'd thought this.)

No matter how great a relationship we have (and my husband and I do have a great one), every marriage—every life!—gets messy, and that makes everything look cracked and worn and ugly. And that makes a lot of people run from it—or throw on that mask. A lot of times when we're in that mess, others look at us and think if we had more faith or prayed more or were better at couple's devotions, we'd be spic and span.

I think differently. Jesus tells us that in this world we'll have troubles, so pretending otherwise is silly (John 16:33). But more important, seeing those masks robs others of a good illustration of what a real Christian marriage looks like—one that's not free of pain, sorrow, anger, or irritation, but that can nonetheless be full of love, commitment, and trust in God's sustenance and grace. Real Christian marriages have couples who understand and believe what Jesus says in the last part of John 16:33: "But take heart! I have overcome the world."

So take heart and take off that mask.