7 ways to get beyond "yup" and "nope"
Elaine Creasman 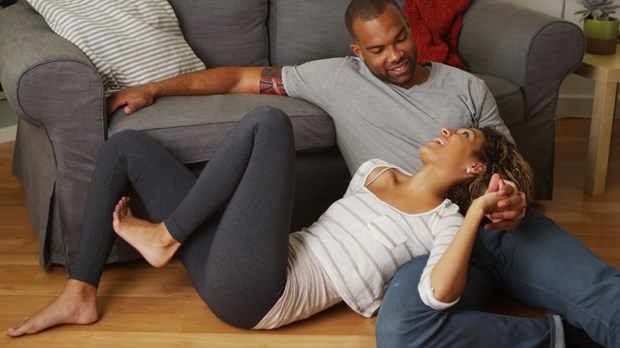 While we were dating and early in our marriage, Steve and I talked for hours, sometimes late into the night. As the years passed, however, he backed off. When we did talk, we ended up arguing, or it seemed he kept conversations superficial. I often wondered, Why doesn't he talk to me anymore?

Then I discovered, through trial and error, that I was engaging in conversation-stoppers such as being a bad listener, a conversation hog, and at times, a nag. So I began a quest to encourage meaningful communication with my husband once again. Here's what I learned.

"Honey, you never tell me how you feel," I repeatedly complained to Steve.

Finally, one day he started to. But as soon as he mentioned his first feeling about a family conflict, I blew it by blurting, "You shouldn't feel that way."

The apostle James says we need to be "quick to listen, slow to speak" (James 1:19). When I put this advice into practice and don't make quick judgments or think about what I want to say next instead of listening to what he's saying now, Steve opens up more freely.

2. Letting him lead brings us closer.

My dissatisfaction with our communication came not so much from the fact that Steve didn't want to talk, but that he didn't talk about what I wanted to discuss. Often I'd muse mournfully, My girlfriends think what I say is interesting; why doesn't my husband?

He doesn't because he's not one of my girlfriends. Steve just can't get excited over hearing about people he doesn't know or about what happened at my women's Bible study like my girlfriends can.

But I still wanted to talk with him! In Ephesians 5:21, Paul says we're to "submit to one another out of reverence for Christ." For me, part of that submission means I adopt a "What do you want to talk about?" attitude. For instance, Steve loves sports. While I usually find sports boring, I love people, so I read about athletes and tell Steve about what I've read.

He also enjoys reading the newspaper, so I try to read it as often as I can. We discuss the stories, which often leads to conversations about how they relate to our lives.

I've also learned to let Steve decide when and where he wants to talk. While I crave face-to-face, intimate conversations, often he talks while he's doing tasks around the house or while we're on errands together. I've learned to say "yes" when he asks, "How would you like to help me with the yard work?" or "Will you go with me to the store?" because I know the task will also include conversation.

When I let Steve take the conversation reins, I was amazed to find he talked more, especially about his frustrations. He then felt more comfortable discussing what I want to. When I let Steve choose the topic, I get to know him better and I feel closer to him.

I used to tell Steve immediately when something was broken, when the kids misbehaved, or when I was facing an emotional crisis. But focusing only on bad news in conversations is a downer, which is a definite conversation-stopper. If bad news must be told, a better way is to save it for an appropriate time, such as when Steve's not stressed or tired, and I'm no longer emotionally distraught. Humor is a good way to keep things positive. Steve and I share comic strips, which often help start conversations about family matters. If I find a funny Dave Barry column in the paper, I share it with him. I try to remember to tell him jokes I've heard. Or we discuss the funny things that have happened to our children or pets.

A funny movie can get us laughing and then talking. The other day I asked Steve, "What's the funniest movie you've ever seen?" Then we discussed lines from movies that made us laugh.

Who doesn't like talking if it's going to lead to laughter?

4. I can agree with him more often.

I'm not sure why, but I used to argue about everything with Steve—even when we were on the same side of an issue! I just couldn't agree with him. One day I read Proverbs 21:19: "[It's] better to live in a desert than with a quarrelsome and ill-tempered wife." That was me.

So I got in front of the mirror and practiced saying two words: "You're right." While they've been the most difficult to say, when I do, they've made a huge difference in the way Steve opens up to me. Another great phrase is, "That's true," when he says something I agree with. I noticed those conversations last longer.

5. He prefers the condensed version.

Setting a time limit on conversations does wonders. "Honey, may I talk to you for 15 minutes?" takes the scariness out of those ominous "We need to talk" announcements.

If I'm talking about something heavy, many times Steve can't handle anything more than five minutes. I used to feel hurt and was convinced he didn't care about me when he'd say, "I've heard enough." Futilely, I'd try to press him to talk longer, with the wrong results. I've learned not to take it personally. He simply isn't able to process a lot of soul-baring at one time.

So, if there's an issue Steve has been unresponsive to in the past, I've learned to take such matters to a girlfriend first. Then I can better give the condensed, less emotional version, and he's able to stay longer in the conversation.

"I learn so much from you, but I can't stand it when you try to be my teacher," Steve said to me one day. That insight caused me to repent of spending too much time attempting to change or mother my husband. Questions that start with, "Why did you … ?" or "Why don't you … ?" remind him of his mother interrogating or nagging him.

Lately when I think of how I speak to my husband, I ask myself, Would I say that to a close friend? Often I realize I wouldn't. So I don't say it to my husband either.

I once heard someone say it takes 12 compliments to make up for one criticism. Recently I was challenged with these words: "People don't know how wonderful they are. Someone has totell them." In marriage, that means I need to tell my husband about his wonderfulness.

Yes, it's okay to tell him what bothers me—but I don't have to tell him a thousand times. When I can't seem to find anything to praise about Steve, it's because I've let unforgiveness creep in. It's time to repent.

Even if I don't approve of some things he does, there are always many more things to appreciate. Too often I take for granted that Steve's a caring father and an excellent provider and money manager. He's an expert at fixing things, and he forgives me quickly when I've blown it. So I try genuinely to lavish on the praise. And I thank him for taking the time to talk to me—even if the conversation wasn't as long and deep as I'd wanted. These days Steve seeks me out for conversation, and I'm delighted that many times he's eager to talk. The most exciting is when Steve comes to me and asks, "Can we talk?"