Carolyn Custis James discusses women as helpers, who God really created us to be, and the surprising role model who changed the way she views herself and all women.
Amy Simpson and Ginger Kolbaba 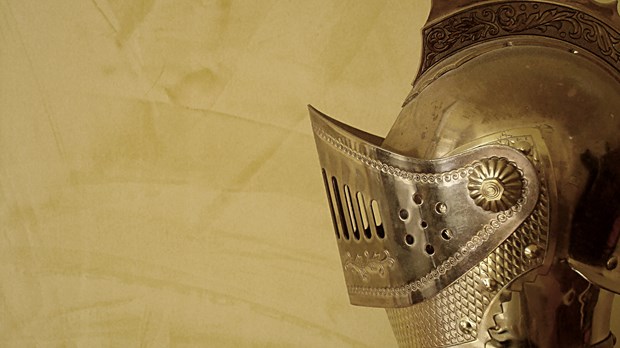 Carolyn Custis James is passionate about women. This powerhouse leader and speaker is known for her biblical and affirming message for women. Author of numerous books including Half the Church, Lost Women of the Bible, and The Gospel of Ruth, Carolyn has devoted her life to helping women discover their uniqueness, purpose, and significance in the body of Christ.

Her claim to fame as the first woman to register at Dallas Theological Seminary, where she walked with the first class of female graduates. She serves as president of WhitbyForum, a ministry dedicated to helping women go deeper in their relationship with God and serve him alongside their Christian brothers.

TCW spoke with her about what drives and fulfills her at the fifth annual Synergy conference:

"As an image bearer of God, you can't know who you are or what your purpose is if you don't know the One you're supposed to be becoming like," she says. "There's a studied passivity that we get into when we believe that God has called only men to leadership. I don't think you can be an image-bearer and not be called to leadership. That may take a lot of different forms, but oh my goodness, what a big deal that is."

TCW: It seems as though whenever I hear you refer to women, you use the word ezer. What does that mean and what is its significance?

When God said, "It's not good for the man to be alone," he added, "I will make a helper." That word is actually the Hebrew word ezer. Historically, we've narrowed the word ezer to mean wife and mother, to indicate that a woman's role is to take on supportive duties for the husband. But when God declared that, they were in Eden. The man didn't have a house, laundry, or meals that needed to be prepared. So what is she helping him with?

There are 21 occurrences of the word ezer in the Old Testament. It's used twice for the woman. But it's used 3 times for nations Israel turned to for military assistance, and 16 times to describe God as Israel's helper.

That definitely changes the discussion.

Exactly. There's a pattern of military imagery: Israel looking for military aid; God as ezer, a shield and defense, better than chariots and horses, standing sentry watch over his people.

But what about the Garden of Eden?

The Garden of Eden was a military context because there was an enemy planning an attack. And man and woman were created to rule and subdue. Adam was commanded to guard the garden. That's military language.

When God said it wasn't good for the man to be alone, that was a blanket statement and not just about marriage. Genesis 1 and 2 are passages about God's vision for the world, for humanity. God created the woman to come alongside him in this battle. She watches his back; he watches her back. They're supposed to be in this battle together.

She certainly can't watch his back if she's weak.

Well, she can't come along as a dependent, because then she's not a help; she's more work if he has to think for her and take care of her and protect her.

So how do we apply this passage to us? The question then becomes, "Am I an ezer or do I have to get married before I can become an ezer?"

No, you don't have to be married. He created all women as ezers. So little girls are ezers. And elderly women in nursing homes are ezers. It's God's calling for us. It starts when we're born. It's not something you can lose, and it's not something that you have to wait for to begin. It's your whole life.

It sounds like this was a process of discovery for you.

It was. I didn't get married for 10 years after college. I was raised to believe you get married and have babies, but that didn't happen. And I wasn't given any alternatives. Nobody came to me and said, "What does God want you to do with your life?"

Too often in the church we feel sorry for women who have careers and aren't doing the domestic family thing. I don't diminish that at all, but when we crown that as God's primary and ultimate calling for women, we create a dilemma for women who don't marry or who don't have children. We don't allow for the realities or diversities of women's lives.

Then inevitably, we block out major portions of our lives when we're not married and don't have kids. It's as if we're waiting for God's purpose rather than looking for his purpose right now

Those 10 years when I was single were rich with purpose; they were part of God's plan for me.

Was there a clear turning point for you?

I took a seminary class in which we studied the book of Ruth. Although I'd studied and taught that book and loved the story, I could never relate to her. But our professor talked about Ruth as a risk taker, a leader. That caught my attention, because I'd never been taught to be a leader. I'd been taught that as a woman I shouldn't take the initiative, but respond to the initiatives the men make.

I wept all the way home from the seminary because I thought, What have I been doing with my life? Then I realized if what the Bible is saying about Ruth is true, the implications for women are earthshaking. That was the real turning point.

How do we fail to realize the strength and leadership of Ruth?

Ruth was with this awesome man, Boaz, but she was leading, taking the initiative. And God blessed her for it.

But in the church we don't teach women the truth about stories like this. Instead we make it a sweet girl gets guy and lives happily ever after story. And it's not that at all.

So what should we be teaching?

We should be digging down into the meat of those stories and teaching about what these women were actually doing. Too often the message we hear is to trust God more and to be better in our devotional life. Nobody's calling us out. Nobody's saying, "You have gifts that God has given you. God has strategically placed you where you are and you're on a mission for him, and as his image bearer you represent him, you speak for him. You are his voice, his eyes, his ears, his hands." It makes every woman's life significant.

This story took place in the Middle East. The way women were viewed, when you come to the book of Ruth in the Bible, it ought to shock you that it's there. I mean, it's a story about—and named after—a Gentile woman in a very manly Jewish book—the Bible. And it's in a culture where women were valued for their connection to men—married with sons. If you didn't have sons, your husband would either divorce you or add an extra wife.

So you have this story of these two women who didn't have any men in their lives. They'd lost their husbands and sons, and Ruth was barren, so she was the lowest common denominator in society. They were trying to survive. Ruth was scavenging. You can't romanticize what she was doing. It was awful.

It looks like Naomi and Ruth were doing insignificant things. Nobody would have noticed these two women and what was going on in their lives. But that's where God's purposes were moving forward, and the battles that they were fighting were for the kingdom. It wasn't just for Naomi's family; it was for the line of Christ.

You have to take the implications from that and say, "This is saying very big things about people's lives—thing they never knew about themselves." So you don't know that you're leading, that you're doing big kingdom things. You're just doing the next thing that God's put in your path. But I don't think we're giving women these rich stories that tell them about their own lives.

These women throughout Scripture—Ruth and Naomi, Deborah, Mary of Nazareth—they're warriors. They're standing up for the kingdom; they're doing the hard things God calls them to do. That gives us a handle on who we are, and that can't be taken away.

How has what you've discovered about women in the Bible and about God's calling for women changed you?

It changes everything. The more I learn about God and his calling on human beings, the more I know my life is purposeful. I love Hebrews 12:1-2 where it talks about a race that's been marked out, which we're called to run; that nothing I encounter along the way is going to throw me off. I may make bad decisions, I may zig when I should zag, but my life is purposeful; I'm on mission; God has me where he wants me. I'm going to go through experiences that shape me as a leader, as an ezer, that help me do more for the kingdom. But it has given me a framework for looking at my life. It also stretches me in scary ways.

I don't think that comes easily when you've been conditioned to back away and not speak up. So it creates some ezer battles within me because every once in a while I get confronted with a situation where the easy path is more appealing. I have ask myself, Is this what God wants me to do? and take that harder route.

That does change everything for women.

It raises the bar. I have responsibility in this world.

If what I'm saying is true, that you are God's image bearer and that you're an ezer warrior and that God created men and women to be his A team, to get the kingdom built, then all these things mean it isn't possible for you to live an insignificant life. You may never have the significance that others recognize, but look at Ruth and Naomi and the huge things that were going on in their little world. You never know. You might be the one.

Amy Simpson is author of Troubled Minds: Mental Illness and the Church's Mission, and editor of Gifted for Leadership and TCW's Marriage Partnership & ParentConnect. Ginger Kolbaba is author of more than a dozen books, including Desperate Pastors' Wives.