But our marriage is stronger because of it
Christy Scannell 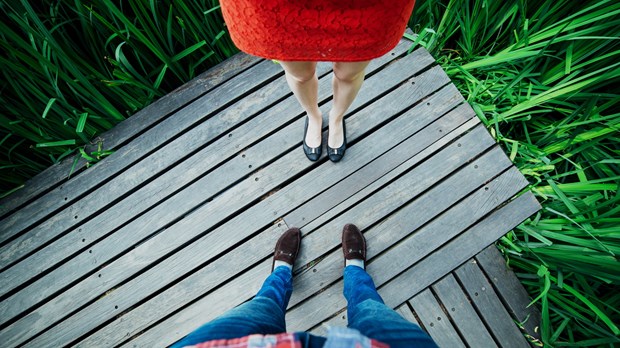 Rich and I don't have children. If you parents of large families think you get some weird questions, try being 42—clearly the raised-eyebrow age for childlessness—and having none.

For example, one time I was at a barbecue and an acquaintance said knowingly, "I'm glad you guys realized having children is highly overrated."

Fortunately I was the only one who heard her assumption. "Actually, we don't use birth control at all and never have," I said brightly. "And it's so freeing!"

I could see the thoughts racing through her mind as her expression changed from superior to sympathetic. "Oh, I'm sorry," she nearly whispered. "I didn't realize you were dealing with infertility. How heartbreaking that must be. Relax—it will happen."

And this is where some people don't get it. Yes, Rich and I welcome parenthood if it's in God's plan for us. But no, we aren't gnashing our teeth and wailing at the sky because our guest bedroom is still just that.

Even my well-meaning mother worries I am repressing an unspeakable grief at not being a parent. "It must be hard on you sometimes to see your friends with their kids since you don't have any," she's said. Truthfully, I think it's much more difficult for her to have no grandchildren from her only child, which makes me sadder than my not having children myself.

A few months ago I was at the gynecologist for my annual exam when the nurse, Debbie, said, "Well, I guess it's looking like no kids for you two after all, huh?" She knew Rich and I had been through a battery of tests to see if there were correctible reasons for why we weren't conceiving.

It was what she did next that frustrated me. "So do you have pets?" she asked.

I shook my head.

I shrugged. "Three nephews, but they're grown."

Her persistence made me laugh. "It's really just fine the way it is, Debbie," I said encouragingly, a sentiment I often overemphasize to convince people it really is.

Unlike so many other unsolicited "counselors," Debbie never hit on the obvious solution: adoption. If I had a buck for every time someone has offered, "Hey, have you guys thought of adoption?" I'd be living on a yacht in the Mediterranean.

Usually the people who suggest this have no adopted kids of their own, which tempts me to retort, "No, have you?"

Of course Rich and I have considered adoption. Some of the most heartwarming stories I've heard involve adoption, and I admire couples who choose this option. But after much prayer and discussion, Rich and I don't feel led that way.

So as I enter my forties, we realize it's likely going to be just us from here on out—"the home team," as Rich calls us. We're a family of two, and as such we protect our family time much like people with children do, forming our own meaningful traditions and rituals.

In fact, by not having children we're able to serve our friends and family in ways we never could have if we were raising kids. Our home is a respite for our parent friends who say they enjoy "being adults again" while we serve them steak and salad away from squealing youngsters set on throwing their cereal across the room. If people need us to help them, we can be there quickly. It's satisfying to be able to offer that appreciated assistance in this rat-race society.

Most importantly, we're available to our aging parents. Rich's folks are nearby, but mine live 2,300 miles away, so I frequently fly across the country to check in on them. We are preparing for the day when we'll be called on to care for all four, and we recognize that as a sort of full circle: first they tended to us, and soon we will look after them.

It's difficult to know why life transpires the way it does, whether we encounter infertility, divorce, job loss, a spouse's death, or any number of other troubles. But as Christians, we know the Lord—the ultimate Parent—has designed a special path for each of us. Some doors we open along that journey might bring joy while others bring disappointment, yet we know "God causes all things to work together for good to those who love God, to those who are called according to His purpose" (Romans 8:28, NASB).

By the way, I made the mistake of telling Rich about nurse Debbie's implication that a pet might assuage whatever craving we have to be parents, which only gave him additional ammo for his six-year lobbying of me to get a cat. So we might have a new addition soon—albeit a furry one. But I promise not to dress it up and push it in a stroller!

Christy Scannell, freelance editor and writer, is co-author of Katt's in the Cradle (Howard Books/Simon & Schuster). She and her husband, Rich, live in Southern California. http://www.ChristyScannell.com

Copyright © 2009 by the author or Christianity Today/MarriagePartnership.com. Click here for reprint information on Marriage Partnership.