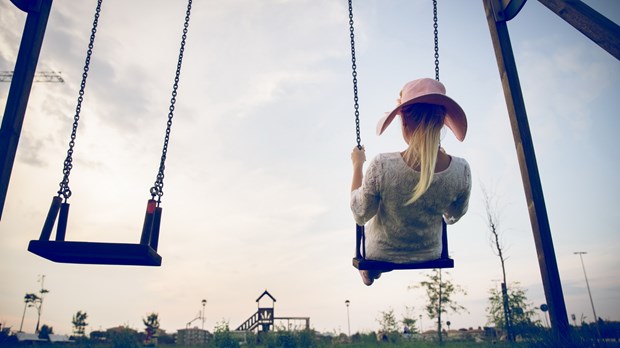 I'm not ashamed to admit it: I spend a lot of time alone. I'm a never-married 30something woman who has no children, who lives alone, and who spends most days in an office by myself. And in all my years of alone time—eating alone, driving alone, sleeping alone—I've learned a valuable lesson: Alone isn't the same as lonely.

I'll be honest, some of this truth sunk in by default as I felt and observed loneliness in the most unusual places. Several years ago I attended a Chris Tomlin worship concert with friends. Standing in this crowd of a couple thousand people, with eyes closed, arms raised, and voices joined, I felt a searing stab of loneliness.

I'd been experiencing a "dark night of the soul"—lobbing questions heavenward and sensing nothing but silence in return. So standing there amidst people who seemed so sincere while singing "How Great Is Our God" made me feel like an outsider in this community of faith. Like an orphan looking in the window at a family feast.

Likewise, several years ago I walked with a friend through a very lonely time in her marriage. Due to some unusual receipts and phone records she'd found, she began to suspect her husband of only a year was cheating on her. It took many lonely months for her to recover from his emotional affair.

And not too long ago I received a phone call from a friend who's the mother of twin toddlers. She'd been watching her girls solo over a three-day weekend while her husband was out of town on business. Now that he was back, she was lonely for some grown-up girl time, which I tried my best to provide at an impromptu gathering at our neighborhood Starbucks.

In these and many other experiences, I've observed a key distinction: Alone is the absence of people, while lonely is the absence of connection. Loneliness is a disconnect with the community we were created to crave.

Oh sure, lonely and alone sometimes occur simultaneously. I've had my fair share of lonely Me Nights during friend-shifts, after break-ups, when I've gotten lazy about my social life. When I let them, these lonely moments are needed nudgings to reach out, to risk new friendships, to lean into God more. In my weaker moments, I just cry it out.

But I've also experienced some Me Nights that are altogether splendid. I love munching on takeout from the Chinese restaurant around the corner and watching a subtitled flick I couldn't get anyone else to sit through with me. In this scenario, I don't have to be coworker, friend, daughter, sister, aunt, church member. I get the delicious freedom just to be. Alone, all of your personality is able to unfurl and fill up all the spaces of your home. Like airing out a well-used blanket. Like stretching muscles after a long flight.

When I'm home alone—watching a movie, reading a book, washing dishes—I get to hear myself think. And talk, since I often carry on an audible conversation with myself. In listening to the dialogue that comes tumbling out when I'm alone, I often hear feelings, thoughts, dreams, and joys I wasn't conscious of before. Alone, I've thanked God for raspberries, dreamed up new articles, remembered faraway friends to e-mail, and sometimes broken into spontaneous song or dance.

Sometimes in this thinking aloud, I come face-to-face with pains I need to feel. So often the busyness of life drowns out these feelings, sometimes by design. But with just my thoughts and words filling the air, I'm forced to see and feel them—painful but necessary steps in dealing with these issues. And bringing them to God.

In so doing, these conversations often turn into prayers—even as I make my bed or cook dinner. There's something right about discussing the drama of the day with God while I'm up to my elbow in suds and dirty dishes. Experiencing God in the mundane moments of life—right where I need him.

In the past year I've made two new friends who are newly single—a 30-year-old divorcee and a 63-year-old widow. As these women have faced new stretches of unanticipated alone time, it's been great to be able to tell them that being alone doesn't have to be a fearsome thing. Actually, it's something we can embrace. And perhaps that's part of the secret—coming to alone moments expectantly, asking God to meet us there and fill the empty spaces as he sees fit.

And in so doing to remind us of a glorious truth that we can't really grasp in the presence of others: We're never truly alone anyway.

Copyright © 2011 by the author or Christianity Today/Kyria.com.
Click here for reprint information.