Why Job's wife may have gotten a bad rap
Daniel Darling 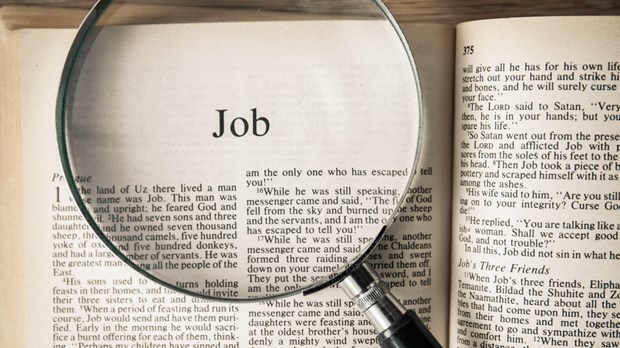 Her name was never revealed and yet she may be the most infamous woman in the Bible. Augustine labeled her "the devil's accomplice." Calvin called her "a diabolical fury."

And the contemporary understanding of Job's wife hasn't improved on Calvin or Augustine. It's difficult to find a book or sermon treatment of the life of Job that doesn't include the usual condemnations toward his wife. It has become a standard joke to pity Job, as if his wife was yet another cross God called this man to bear.

If the Proverbs 31 woman represents a model of Christian virtue, the wife of Job occupies the role of least desirable, sharing space in the Hall of Shame with the likes of Jezebel, Delilah, and Michal.

But is this image an honest assessment of her character? Or is there a possibility that in our rush to empathize and identify with Job, we've rushed to cast judgment on his wife?

I wonder if there isn't a gap in our understanding of the Job story. Although clearly Job is the main character, he is not the only one. She may not have been the primary subject of the cosmic argument between God and Satan (1:6-11; 2:1-4), but she was still caught in the crossfire. You might argue that every hardship endured by Job was similarly felt by his wife:

She watched her children die (Job 1:13-19). Ten times God had blessed her womb. Ten times she endured the joy and pain of childbirth. Ten lives nurtured to love, honor, and respect Jehovah. From the account in the first chapter of Job, this appears to be a fun-loving, God-fearing, tight-knit family. Who was the heartbeat of this home? Likely Job's wife played a part in that. It's unlikely he could be such an esteemed man in society (Job 1:1) if his wife was not an integral and influential leader in her own right.

Imagine the grief that overwhelmed her soul as she looked down in disbelief at ten freshly dug graves.

She experienced dramatic financial loss. The Bible describes Job as a wealthy man, perhaps the richest in the world (Job 1:3). Undoubtedly his wife was accustomed to a lifestyle of luxury and comfort. I imagine her home was adorned with the finest furnishings, her clothes spun from the most expensive threads. Her children likely had everything they needed.

In one really bad day, she lost it all. All their wealth, property, and way of life (Job 1:13-22). She was not only bankrupt, but homeless, forced to beg outside the city dump.

She became a caretaker for her disease-ravaged husband. Although Old Testament scholars don't agree on the nature of Job's illness, clearly his pain was so excruciating, he asked God to take his life (Job 3). It distorted Job's appearance so dramatically that his closest friends could barely recognize him and when they approached, fell to the ground in pity (Job 2:12). This last temptation brought by Satan was so severe, it nearly broke Job's soul. Every day Job spent at the ragged edge of death, only experiencing momentary relief brought by the heat of the burn piles and the scrape of pottery shards.

While we weep with Job, we miss the faithful, steady presence of his wife. She put aside her own grief to stay care for her husband. Imagine the exhausting drain, caring for a suffering soul like Job. Imagine the loud howls of agony, hour after hour, day after day. Imagine the one you love walking the thin line of sanity, suffering excruciating, debilitating pain.

Job's wife continued this mission of mercy without the resources of a helpful support network, without any financial resources, without relief. Their children were gone, their friends and family scattered, her God seemingly absent.

And we come back to those seemingly bitter words of resignation, the only recorded words of Job's wife in the entire story. Words shared at the lowest point of her life.

"Do you still hold fast your integrity? Curse God and die" (Job 2:9, ESV). These are tough words that appear to reflect a heart bitter and angry toward God. This is where most commentators pounce, accusing Job's wife of collusion with the Devil to force her husband to do exactly what the Devil predicted Job would do: give up on God. Many question her faith, wondering if perhaps her faith in Jehovah wasn't real.

I find both scenarios difficult to believe. Every human has moments, words, thoughts we'd love to have back, shared in the crucible of a crushing trial. Imagine if those words were recorded in history for everyone to dissect and analyze.

Clearly God chose to record her thoughts in Scripture, yet sometimes I wonder how fair it is to define an entire life based on one conversation. Nowhere before or after this incident are we given any indication that Job's wife was a perpetually bitter, unhappy wife.

And perhaps her advice to Job wasn't born out of her own misery, but out of compassion. Day after day, she witnessed her husband live out his days in utter agony, no relief in sight. Maybe she was seeking the most compassionate way out for Job. Curse God, pull the plug, and get it over with. Perhaps she longed to see an end to Job's suffering, a painless journey to the sweet relief of heaven. This is certainly something Job himself desired of the Lord.

It's not uncommon to find raw, honest, expressions of grief spilled on the pages of the Bible. Yet we celebrate David, Moses, Jeremiah, and even Job as being authentic and honest, but heap judgment on Job's wife for similar expressions.

Job's response is fascinating. He carefully listens and watches his beloved wife shrink under the weight of their shared hardships.

I imagine Job lifts his blistered hand and strokes her hair. At first, his words read like a harsh rebuke: "You speak as one of the foolish women would speak. Shall we receive good from God, and shall we not receive evil?" (Job 2:10, ESV).

Such a far cry from the ringing condemnation she's received in the centuries since. Job knew his wife's suffering was just as acute as his. In fact, seeing the pain in her eyes may have added to Job's great suffering.

It's likely she was in a state of shock. Sudden loss has a way of clouding our judgment, distorting our view of reality and of God. Often those living in the thick of tragedy make contradictory statements about faith and life. Today we might even conclude Job's wife suffered from post-traumatic stress disorder.

Apparently Job's words were the balm his wife needed to soothe her soul, because she isn't heard from again in the remaining chapters of the story.

What Does God Think?

Curiously, while authors, commentators, and pastors all rush to judge her, God is silent. The Scriptures don't record specific words of blessing for Job's wife like they do for Job (Job 1:8).

Yet we don't find divine rebuke either. Surely, if God was displeased with her, he would have expressed it. He didn't hesitate to rebuke Job's friends (Job 42:7-9).

All we know of God's treatment of Job's wife is how he blessed her after the trial was over. She shared in the doubling of their wealth (Job 42:10). She had the privilege of giving birth to ten more children, whom the Scriptures declared the most beautiful in all of the land (Job 42:12-15). And it's likely she shared in the many more fruitful years of her husband's life. The Scriptures say that Job lived long enough to see four generations of his offspring (Job 42:16).

A Model of Endurance

So what can we learn from Job's wife today? Perhaps her greatest testimony is her simple presence during her husband's lowest moments. At the end of Job, we read that his siblings and friends returned and "consoled and comforted him because of all the trials the LORD had brought against him" (Job 42:11). It's easy and safe to show compassion after the fact, but during Job's lowest moments, they were nowhere to be found.

Yet every single day, there was his wife, caring, loving, and enduring the trials Satan inflicted.

The trials that would split many marriages didn't split Job and his wife. They stuck it out together. And at the end of this story, we read of them conceiving and raising another ten children.

Was her attitude perfect throughout the storm that engulfed her family? No. Did she say things she would later regret? Absolutely.

But through it all, she endured, her faith in God remained intact, and maybe, just maybe, her service to her husband should be held up as a model of biblical character.

Daniel Darling is the senior pastor of Gages Lake Bible Church in the northwest suburbs of Chicago. He is the author of Teen People of the Bible, Crash Course, and iFaith. He and his wife, Angela, have two daughters and a son. www.danieldarling.com.