Just as the women at the tomb, we face the facts, then work for the miracle
Renee James 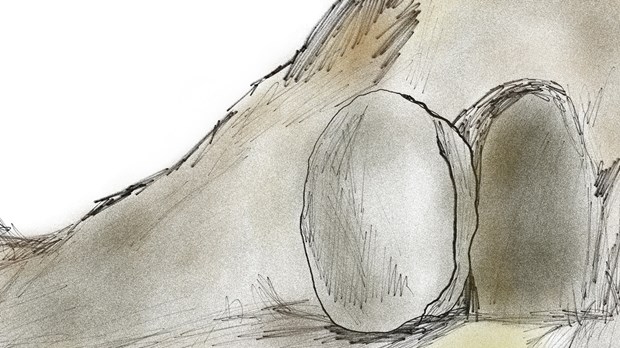 "But very early on Sunday morning the women went to the tomb, taking the spices they had prepared. They found that the stone had been rolled away from the entrance. So they went in, but they didn't find the body of the Lord Jesus."—Luke 24:1-3

Have you ever arrived at a but moment in your faith journey?

In early January, my pastor, Steve, invited those who could pray in faith for a healing miracle to join him in praying for his wife, Elizabeth. Though CT scans in summer 2011 had shown no leftover cancer cells from Elizabeth's eight-month battle with ovarian cancer, recent tests told a different story. Cancer had returned. Too-low hemoglobin levels had probably damaged her heart, while blood clots had formed in her lungs and abdomen walls.

In my pastor's words: "We are grateful for the doctors. In their minds, the doctors are sending her home with only a short time to live …. We appreciate all that the medical community has done …. They have done the best they can. But now, we lean even more fully into God's promises, love, and power."

My pastor's invitation ushered me into a but moment: Do I have what it takes to be one of those Luke 24 women who had followed Jesus from Galilee to care for his needs (Matthew 27:55)? Those women had heard his final cry on the cross, seen Joseph wrap Jesus' body and place it in the tomb, felt the weight of the stone settling into place in front of the tomb's entrance. These women faced the facts but returned to do the work they'd prepared to do.

Abraham faced the facts (Romans 4:18-21). He faced the fact that his body was as good as dead—since he was about 100 years old—and that Sarah's womb was also dead.

The women at the tomb faced the facts: Jesus was dead. His wrapped body now lay in a tomb they couldn't enter because a stone blocked its entrance. "Who will roll away the stone?" they'd asked themselves.

Steve and Elizabeth have faced the facts. She may die tomorrow.

I want to face the facts and despite them, pray in faith for her 100-percent healing.

What facts do you need to stare down? What have you laid to rest—not because you wanted to and certainly not on your terms? What stones block the place where what was most precious and life-giving to you now lies, wrapped and lifeless?

The women had observed Sabbath. But as soon as they decently could, they returned, bearing the spices they'd prepared to anoint Jesus' body. Resurrection movement is like that—a force that pulls you forward from the facts you've faced and pushes you to return … to a tomb in the dark of an early morning or, like Abraham, into the sweet dark of a tent, holding Sara's familiar body close, one more time, together preparing for a miracle.

And as they crushed and readied their spices together the women couldn't know that they would be walking into a miracle. As far as they knew, nothing had changed. Jesus' body still lay behind a stone they had no idea how to move. That would have been miracle enough perhaps; help to break the seal and push the stone aside so that they could enter. To do what?

Prepare to Have Your Heart Broken

The power of but lies in the courage those women displayed to return … to do work that would break their hearts: shed more tears, touch the body's cold limbs, look at that face one last time, wrap him up. Anointing a body is heartbreaking work. My heart breaks as I pray for Elizabeth's healing—her illness shouldn't be! But how else can resurrection movement happen, except from the heartbreak of the fall's consequences?

We see those consequences around us every day—in shattered lives; in illness and disease; in the named sorrows and little deaths we all carry around in our hearts. Indeed, much in this world should break us: urban crime, pornography, the plight of refugees, human trafficking, the erosion of nuclear families, unemployment, addictions … the list never ends. Those Luke 24 women stepped out and returned.

What did those women find? Just an angel … explaining that the stone had been rolled away, asking why they looked for the living among the dead when the one for whom they searched lived.

The women were afraid, and rightly so. You should be scared when a miracle happens in front of your face. A rolled-away stone, an empty tomb, and angels—these were the new facts the women now faced. I wonder what stones shifted in their hearts when they realized Jesus had risen just as he said would happen (Matthew 28:6).

It mattered to God that Abraham was fully persuaded that God had the power to do what he had promised. It matters to God that, in the face of injustice and sorrow, you do what you know you need to do: care for his needs today (Matthew 27:55). Love your neighbor as yourself. Do justice, love mercy, and walk humbly. Return … despite the facts. Maybe because of the facts.

Your returning matters to a world that waits to be anointed, bandaged, cared for, wept over. When you do these things you glorify God.

So I returned, signed up for my hour of the church's 24/7 prayer vigil, unable to shake the sense that I must pray this way: for 100-percent healing, no matter the cost.

Are you ready to move forward boldly, fully persuaded that God has the power to do what he has promised you? Return then, prepared to do the work, however heartbreaking, that you know you are to do. I wonder what stone you'll find God has already rolled away; what miracle you'll experience … just as he said.

Renee James is the director of communications for Canadian Baptist Women of Ontario and Quebec, a women's mission organization in Canada. She believes that missions work is resurrection work.