One conversation with a Catholic friend has stuck with me through the years.
Joy-Elizabeth Lawrence 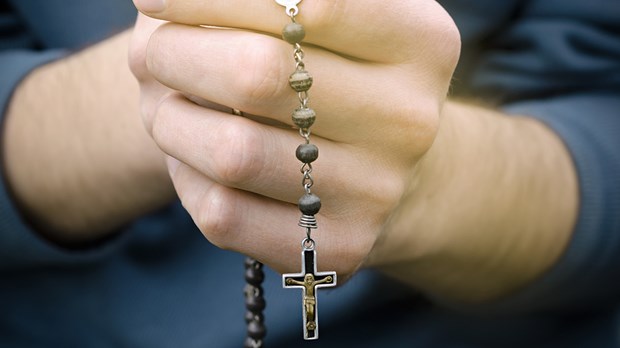 "I'm just not a fan of how you Catholics venerate Mary," I said to my college friend Erica (not her real name) during one of our regular conversations about the differences between my evangelical Protestant faith and her Roman Catholic one. At that time, I was thinking about the "Hail Mary" prayer and certain statues in front yards, not the fact that the Oxford Reference Dictionary defines venerate as "to regard with deep respect."

Looking back at this conversation with Erica, I realize that I didn't really know what I was talking about; rather than understanding Roman Catholic theology, I was parroting what I'd heard others say. My comment was knee-jerky rather than thoughtful and informed.

To me, a dyed-in-the-wool Protestant, making Mary more special than any of the other folks in the Bible was just too Catholic. To me, Mary was … well, just plain Mary. She was the person I was loathe to play every year in my family's at-home Christmas pageant because it's embarrassing to pretend to be pregnant, especially when the only males of the house are one's father and eight-year younger brother. (I preferred the angel of the Lord and his speech to the cowering shepherds. Mary always seemed a little mousy.)

Erica replied, more graciously than I deserved, "You have to understand that through the veneration of Mary, women are given a model of how to follow God's lead. Jesus is a great example, of course, and we follow him. But he was still a man—and we're women. Mary is a wonderful model for us because she shows us how we, as women, should follow God."

That threw me for a loop. First, Erica answered my question even though I'd probably sounded like a jerk. Second, it was a good answer.

Certainly there are significant and important differences between the Protestant and Roman Catholic understandings of Mary, as well as on several other matters of faith. Yet, though Erica and I had different theological perspectives on key points, we found unity in Christ. Our friendship grew as we together studied a fine arts program at a secular school that had few other Christians. What Erica taught me about Mary in that simple conversation has stuck with me since then.

I've remained Protestant in my faith and practice, but this Advent I've been thinking that Mary teaches us, to put it in Erica's words, "how we, as women, should follow God." This past year, I started to identify with Mary even more because I had a baby. I knew what it felt like to be "great with child," to waddle around and have to go to the bathroom every five minutes, to give birth the old-fashioned way. (I'm not trying to sound self-righteous about natural childbirth here, but seriously, that's what Mary did.) And I've realized that there was something about Mary that caused her to be highly favored.

Let's go to the Gospel of Luke where Mary is first introduced. Luke says a virgin from Nazareth is pledged to be married to a man named Joseph. An angel, Gabriel, comes to Mary and tells her that she has found favor with God and will have a son that she should name Jesus. Gabriel continues, "He will be very great and will be called the Son of the Most High. The Lord God will give him the throne of his ancestor David. And he will reign over Israel forever; his Kingdom will never end!" (Luke 1:32-33).

"But how can this happen? I am a virgin," Mary says. Mary, understandably, seems more concerned that she will give birth than that she will birth a king. But once Gabriel answers Mary's question, "The Holy Spirit will come upon you, and the power of the Most High will overshadow you," she accepts willingly by saying, "I am the Lord's servant. May everything you have said about me come true."

Let's look closely at Mary's response to Gabriel's news in order to see better how Mary can be an example of faithfulness to us.

Mary models how we should follow God in that she graciously accepts the angel Gabriel's news. The graciousness Mary demonstrates is amazing. She doesn't communicate worry about her reputation, her family's response, Joseph's response, or concern about how she will provide for her baby. She doesn't ask 57 questions. She doesn't burst into tears and run from the room. Mary's graciousness involves a certain amount of self-control, which many of us could learn from in this age when emotional authenticity is often more valued than emotional self-control.

As a Servant, She Accepts Her "Job."

Mary understands that accepting the news means being a servant. Have you ever toured a home that had servant quarters? Last year, I visited the historic Biltmore Estate in Ashville, North Carolina. This enormous house has a staggering number of bedrooms, an indoor swimming pool, and a bowling alley. Along the top of the house are servant quarters filled with small rooms, a bit like rooms on a boat. When I visited the Biltmore house, I imagined what it would be like to be a servant of the house a century ago. Tasks were assigned and completed on a schedule to keep the household and grounds running smoothly. I hoped that my role would, perhaps, involve a little more creativity (an assistant to the pastry chef?) or excitement (watching the daughter?) than doing something that involved fine attention to detail such as cleaning the windows or polishing silver. Hopefully, the mistress of the house would have assigned me to something I was good at.

Similarly, God gives Mary a specific assignment. When she hears what she's called to do, she understands her role in this drama. She doesn't merely say "I'll do it" (or as Scripture puts it, "May everything you have said about me come true"); she also adds, "I am the Lord's servant." There's a certain no-nonsense practicality in her response. God's given her a job, and just as a servant in a large household would accept and perform her duties, Mary matter-of-factly accepts the assignment God's given her.

Because she views herself through the lens of servant-hood to God, Mary is willing to do whatever God asks, even if this call involves nausea, fatigue, social alienation, relational struggles, and, perhaps, a marred reputation for life.

Later in the story, Mary visits her cousin Elizabeth who, as she has learned from Gabriel, is pregnant in her old age. When she reaches her, Mary says, "Oh, how my soul praises the Lord. How my spirit rejoices in God my Savior! For he took notice of his lowly servant girl" (Luke 1:46-48). From Mary's song, we learn that Mary is no longer just graciously accepting Gabriel's news but is rejoicing in the role God has given her. Although she is God's servant, Mary feels honored (and she is honored) that God has chosen her to carry his Son. We can only imagine if there are inner struggles Mary is working through—but nevertheless, she's rejoicing. Most of us have days of struggle; but despite difficulty we can rejoice in the role God has given us and that he is mindful toward us.

Over the years, I've lost touch with Erica, but some days I think about her and give thanks that she was in my life for three years. I trust that, wherever she is, she remains a faithful Christ-follower, just like Mary. It was her insight that compelled me to understand what it means to venerate Mary in the best sense of the word.

As we move through Advent and observe this season of waiting, quiet, and reflection, reflect on Mary's response to Gabriel's news and God's call for her life. Look for opportunities to accept graciously what God has in store for you (even if it isn't what you would have planned for yourself), to understand that serving God means being a servant, and to rejoice in the role God has given you.