Our marriage thrives on the right advice.
Sherry Van Zante 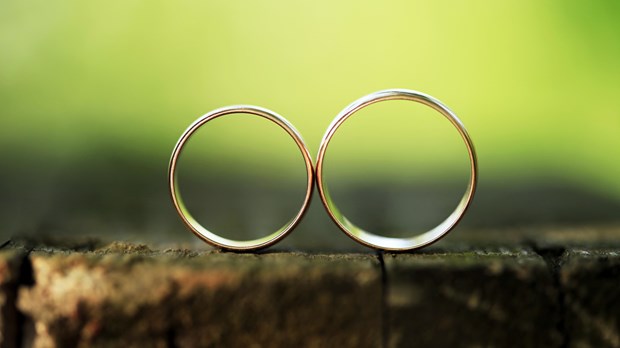 Driving through Bakersfield on our way home from Thanksgiving, I read billboards to stay awake. They came one after another, then another. Suddenly, on a plain black field with simple white letters, one read: "Need marriage counseling? I'm available. —God."

I laughed out loud.

Loyd, asleep in the passenger seat, roused. "What's so funny?" He rubbed his eyes.

I told him about the billboard and he chuckled too, then settled back down to sleep as I drove on.

Married 35 years, we both know we've stayed together because God has always been available with strong, straightforward marriage counsel. We were both tickled to see this truth stated so bluntly.

From the beginning, Loyd and I committed to making our marriage work. We had read in Malachi 2:16, " 'I hate divorce!' says the LORD, the God of Israel." And we learned in John 14:23 that if we loved God, we would obey him. We believed divorce wasn't an option, but we still used the word to threaten and hurt each other until our seven-year-itch. In an argument that year, when Loyd dropped the "D" word, I looked him straight in the eye and asked, "Are you really ever going to leave me?"

"Well, I'm not going to leave you either, so how about we start being nice to each other?"

From that moment on, we chose to never go there again. Our minds changed and the word quit passing our lips. Divorce truly was not an option for us, so we quit pretending it was. Now that even acting as if we were going to walk away wasn't an alternative, we knew we had to face our problems head-on, work out what we could, and exert ourselves to accept what we couldn't resolve.

At that point, God counseled us one-on-one as he worked to help each of us transform from the inside out.

God Said, "If You Give up Your Life for Me, You Will Find It"

In Matthew 10:39, he taught me in clear terms that everything is not about me, my feelings, or my rights. He taught me humility. I learned that it doesn't hurt to be treated like a servant, once you realize you are one. I started to see that I was to serve rather than wonder why Loyd and the rest of the world wouldn't serve me.

Next, my Counselor directed me to Proverbs 31:10 – 31, where I read about a wife of noble character, a woman who was capable and wise. She served not only her family but also her community. I saw how hard she worked. She rose while it was still dark, and her lamp did not go out at night.

She didn't ask why she had to do everything. She didn't say, "What about me?" She didn't complain—she was too busy serving everyone else to think about herself. And she was happy. Even her children noticed. My Counselor told me that she was happy because when we give our lives away, we gain them. When we serve, we become the greatest of all.

Now I had a role model, a generous, confident, kind, strong, wise, and dignified woman who had a sense of humor, too. She taught me to happily do all the things needed to make a household comfortable and efficient. I had complained about having to do "everything" before, but with her help, I was growing to see these acts of service as expressions of my love for my family. I started picking up those balled-up socks on our bedroom floor, pulling them out long, and tossing them in the dirty clothes without muttering under my breath. I stopped slamming the dishes into the dishwasher after dinner when my husband and children headed to the couch to watch TV. Alone in the kitchen with those dirty dishes, I breathed deeply and slowly and told myself, "This is a loving act of service." When the work was done, I joined my family on the couch, and they wanted me there.

That Proverbs 31 woman also taught me to encourage and support my husband rather than nag him and belittle him. She helped me to see the good in life and comment on it, to be thankful and create a positive tone in our home. When I did these things, Loyd stopped working late so often. He hurried home to be with me because I made him feel good.

My divine Counselor directed me to 1 Corinthians 13, where I learned I was to be patient, kind, generous, humble, forgiving, faithful, and full of hope. I was not to be envious, boastful, arrogant, or rude. I was not to insist on my own way. I was not to be irritable or resentful.

Rather than wish Loyd would change, I had to be willing to change myself. I prayed to God for a new heart. I asked to be willing to make the first move to be kind, patient, and forgiving. It's still hard work, and I struggle often to quiet the voice that sometimes screams, "What about me?" I fight to push down the part of myself that wants to be the master and not the servant.

My Counselor has instructed me to do a lot of things that do not come naturally for anyone. He told me to bless Loyd when I think he is persecuting me, and every cell in my body longs to curse him. My Counselor told me not to repay evil for evil when all I can think of is getting even. In God's structure, or framing of reality, we become great by giving up our rights.

God taught me that Loyd can hurt me but if I choose to forgive him, eventually the forgiveness I have extended will free me to get over the hurt. However, if I choose to nurse the hurt and withhold forgiveness, the hurt will never go away. Through active forgiveness, both of our hearts have been healed over and over again through the years.

God Urged Me to Remember the Golden Rule

My Counselor suggested I treat Loyd as I wanted to be treated. So I labored to become someone I would want to be married to.I started getting up early to begin the day with Loyd over a cup of coffee and breakfast. I stopped doing whatever I was doing and went to the door to greet Loyd when he came home. I held his hand whenever I could and kissed him often and kissed him good. I showed interest in his dreams, his work, and his hobbies. I worked to listen and understand his point of view. I remembered my manners and said please and thank you a lot more often. I bit my tongue when I was tempted to be negative. I chose to do things like bring Loyd a glass of water when all I wanted to do was sit down.

I became trained to take action, even when I didn't feel like it, because I found out love is an action, not a feeling. Guess what? Loyd started taking action too. He still brings me a cup of coffee almost every morning. We all long for appreciation and attention, and when we give, we often get.

God's Counsel Is Free, But It Costs a Lot

I looked over at my sleeping husband. I don't exactly know the things God has covered with Loyd one-on-one, but I suspect the topics were pretty much the same, for Loyd has served me. He has been patient and kind and generous. He has forgiven me great offenses and hurts, and he is someone I want to be married to.

I know Jesus is Loyd's role model, and like Jesus did, I know Loyd would die for me. In many intangible ways, he already has.

God, the great marriage counselor, taught women to submit, implying it is not natural for most women, and he taught men to love, implying it is not natural for most men to value the significance of this emotion. In pre-marriage counseling, our pastor cautioned us about these very weaknesses. After evaluating our personality tests, he told Loyd he tended to be indifferent and would have to work on valuing my feelings. He told me I tended to be domineering and would have to work on showing Loyd respect by resisting my desire to control him. These traits remain our weaknesses to this day. This human counselor simply echoed God's counsel.

When Loyd and I were unhappy, we weren't able to change our marriage because we didn't have the power. God did, but he wouldn't just do it for us. He gave us tools to create a great marriage and offered the counsel, but he required our action and cooperation. We both had to yield in obedience to doing things God's way, and following his counsel isn't easy.

Like the billboard said, God is available for marriage counseling, but his counsel is strong and straightforward. While he cares about our feelings, he teaches us to subject them to him for correction. He knows human feelings are fickle. He comforts us in our suffering while we squirm in our circumstances. He tells us what is right and wrong, what we ought to do and ought not to do, and leaves the choice to us.

Sherry Van Zante married Loyd when she was 18. Decades later, marriage is the hardest, but also the best, thing she's ever done. She and Loyd live on the central coast of California.